The big kit at the event may have been out in the aisles and avenues, but there were plenty of smaller items in the marquees. We pick out some of the more interesting items.

Pto shaft covers may not be the most exciting items in the machinery world, but that hasn’t stopped thoughtful makers from coming up with nicer-to-use designs. 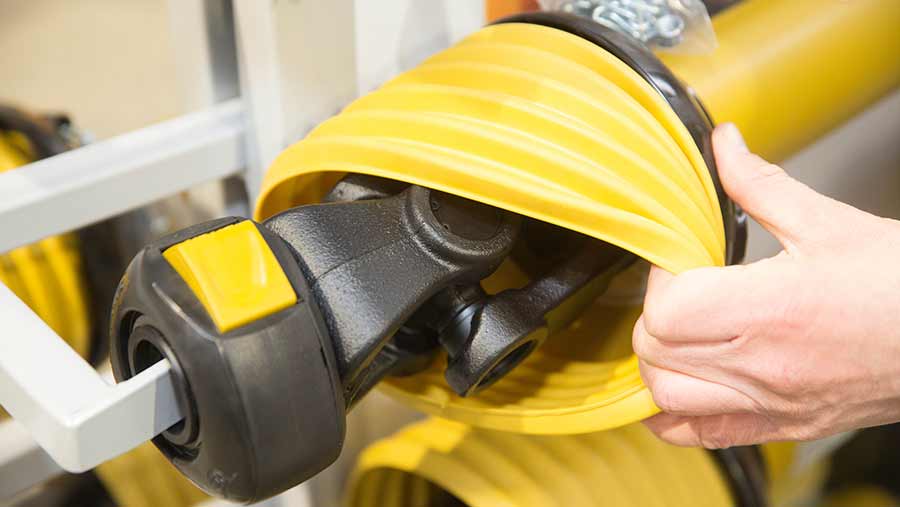 Suffolk company Broadwater Machinery was showing pto shafts with flexible rubber cones from Slovenian maker Cerjack, which come with much bigger buttons to make the job a bit easier.

Broadwater was also showing its new Polish-made Talex Eco Cut 185 mower. Priced at a reasonable-sounding £2,250, it has a steel hood (rather than the usual canvas arrangement) and folds up hydraulically. 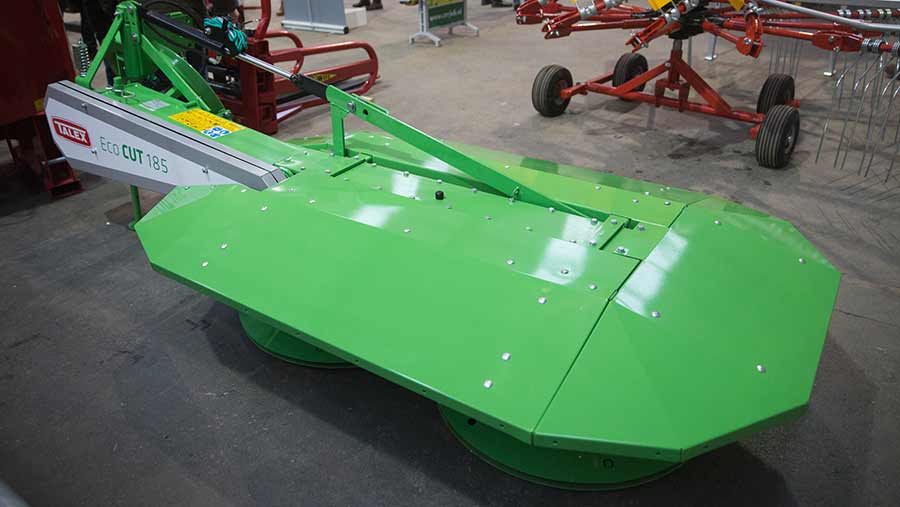 West Sussex firm Salmac mainly sells vegetable and salad machinery, but it also offers an intriguing pigeon deterrent that works its way up and down the field, firing off a banger at preset intervals.

At Lamma the firm was showing an improved version with a galvanised chassis that can be lifted into a pickup truck.

It can work in a field up to 900m long at a steady 3-4kph and the man-sized effigy turns around and sets off a bang at adjustable intervals. 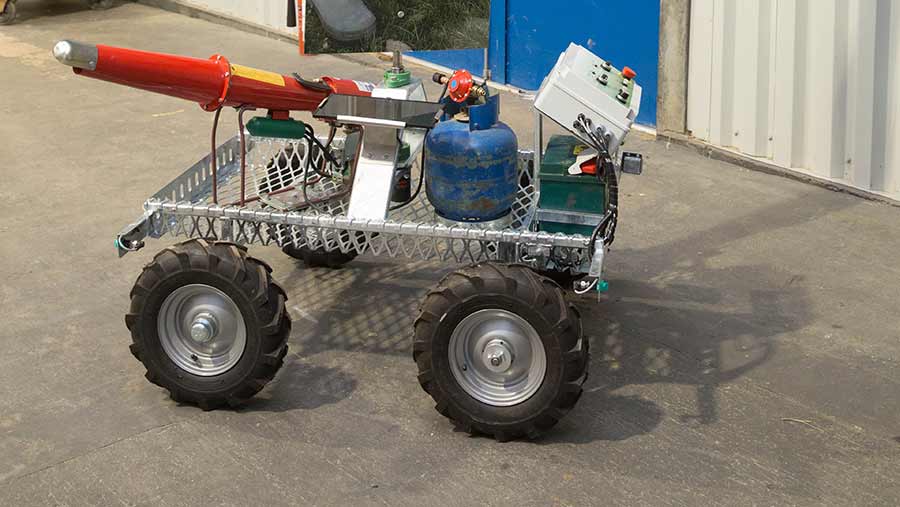 You can also set the number of hours it can work for each day, so there’s no danger of upsetting local residents.

Power comes from a leisure battery and a sensor at the front and back stops the vehicle if it meets an obstacle. Cost is £2,500 plus £220 for the banger.

Solar panels may be sprouting on every roof in the country, but they have not been used much for powering field machinery.

However, Standen was showing a unit from Dutch company De Jongh that replaces noisy on-board generators, and there are four or five units quietly working on specialist vegetable farms in the UK already.

The solar panels gather energy from sunshine and store it in batteries that power electric motors with a top speed of 4kph. 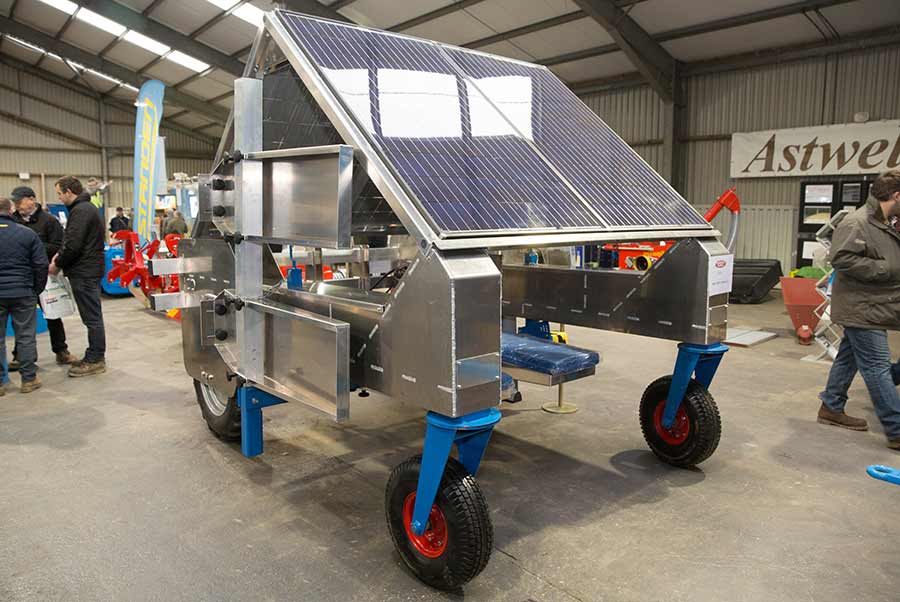 The panels also provide shade for the workers who are weeding salad crops and are expected to be used for other slow-moving machines such as carrot and Brussels sprout harvesters. The machines cost about £17,000 each.

Standen was also showing an Agri IP toilet trailer that can be towed about for staff working in the fields. Flotation tyres are offered, plus an agricultural towing eye, fresh water tank and washbasin.

The standard unit is only rated for agricultural speeds, but a high-speed road trailer is also available. Cost is £3,000. 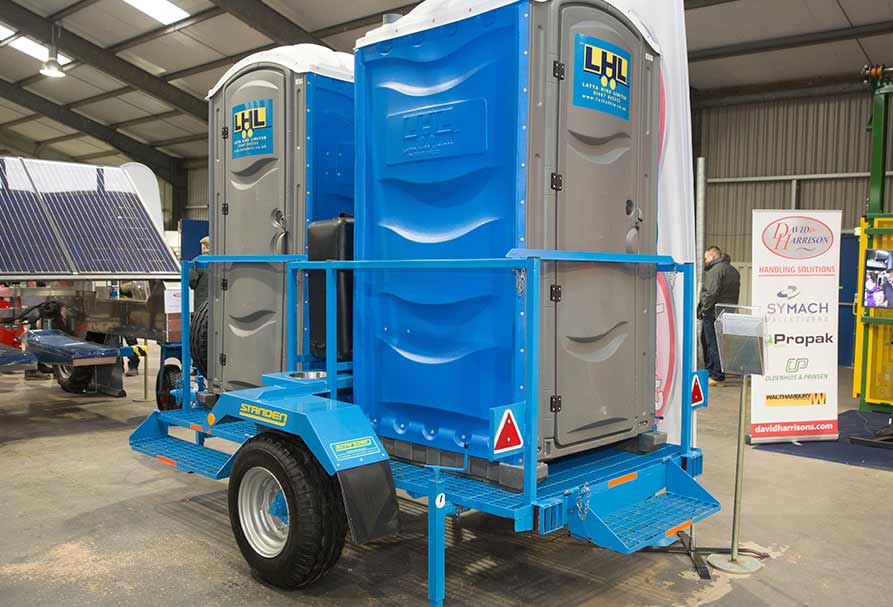 Plate meters have been around for several years, providing a high-tech way for livestock farmers to work out how much grass they have in any one field.

However, it can involve a tremendous amount of walking – an area of 120ha, for example, will take about five-and-a-half hours to check and should be done once a week through to winter. 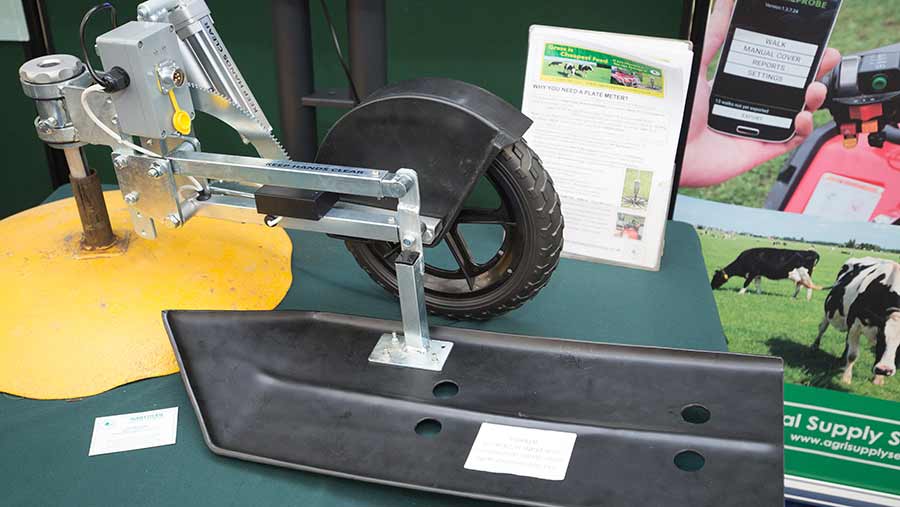 Gloucestershire company Agricultural Supply Services was showing a new type of plate meter that speeds up the process markedly.

The RPM-20 fits to the back of an ATV and uses a plastic skid with sensors underneath to measure grass quantity.

Speeds of 10-22kph are typical and the data is transmitted via Bluetooth to the owner’s mobile phone.

An app lets you export the information to any pasture management software such as P-Plus. Price, including the app, is £2,650 and it’s aimed at larger livestock farms.

Induction heaters that can quickly heat up a nut or bolt have been around for decades and tend to be pretty bulky, but small units such as the Mini Ductor Venom are now available at reasonable prices. 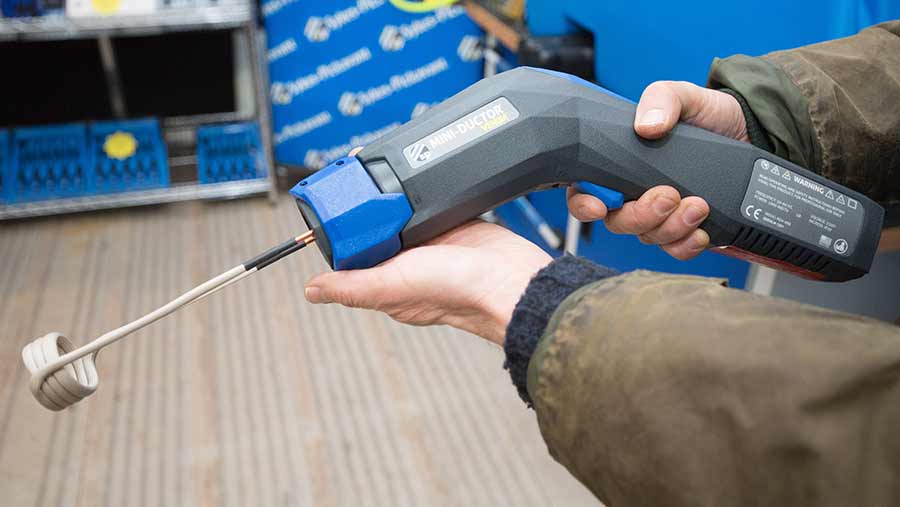 They provide a surge of instant heat to help loosen fastenings you would otherwise struggle to remove. They don’t use flames, either, and only require the user to wear safety glasses.

The £595 Mini Ductor Venom is a mains unit with an angled design and a trigger to operate it. It also come with an LED usage indicator and clever twist-lock system to make it easier to use.

Swedish farmer Anders Gertssons has come up with a system for plugging pierced seed bags.

The Plug-it looks like the bishop in a chess set, but it is a big plastic device that screws into the seed/fertiliser bag and stops the flow of material.

Not just that – it will stay in there even if the bag is hit or moved, so you don’t have to take it out until the bag is empty. 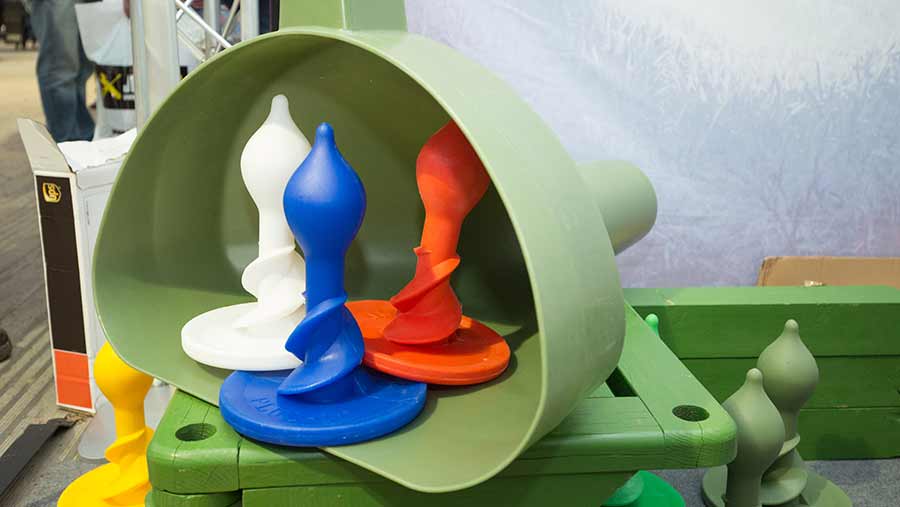 Not content with sorting out ruptured bags, Mr Gertssons put his mind to finding a way of shovelling spilt grain into an empty or part-full bag without half of it falling back on the ground.

Conventional ATVs are marvellous machines, but they are pretty noisy and use quite a bit of fuel. However, now there’s a new two-wheel-drive option from New Zealand maker Ubco.

A 40Ah lithium battery provides the motive force and cost is said to cost just 1.5p/mile (equivalent to 882mpg). At the same time, it can be used for 60 miles before needing a recharge, which can take up to six hours. 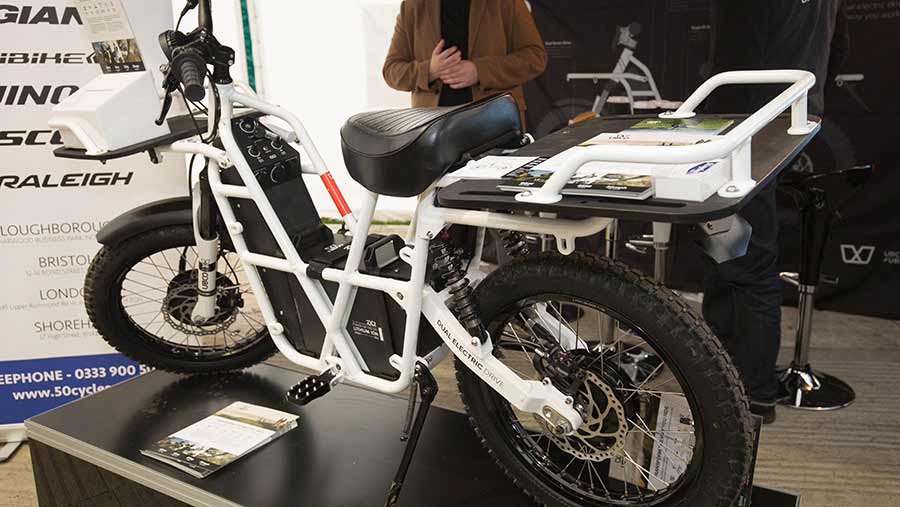 Both wheels are driven, with the rear motor kicking in first and the front one engaging a second or so later.

How long does the battery last for? The company says it will have lost just 20% of potential power after 500 cycles and replacements cost £100/year.

Max speed is a steady 32mph, but a road legal kit will be available in June. It could be used for slug pelleting, too, says the company, and it costs £4,995.

East Yorkshire is already something of a hotbed of cultivation kit manufacturing, and there is now another name to add to the list – Grange Machinery.

The firm’s first machine is a strong-looking low-disturbance toolbar in 3m, 4m and 6m widths.

It comes with front cutting discs, shearbolt or hydraulic protection on the legs and as many services as the customer wants. The full system for a 4m model costs £16,000. 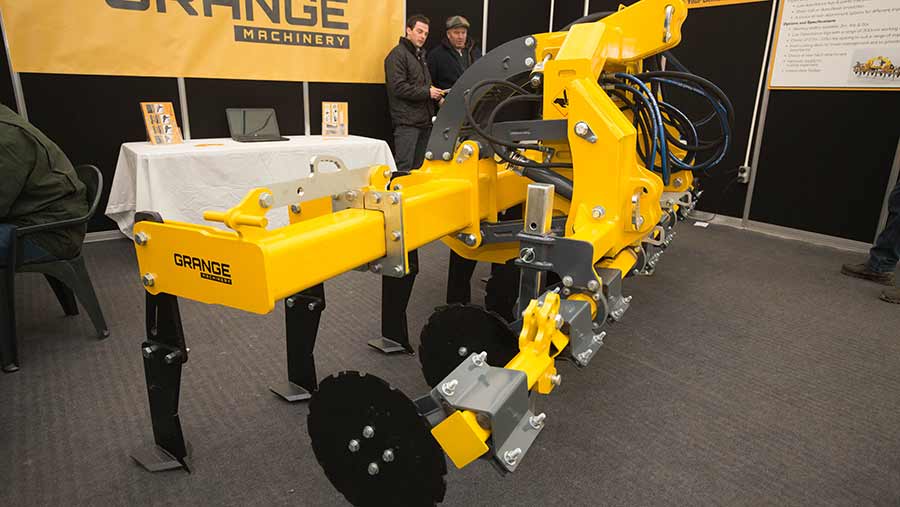 There may already be lots of wheel changing devices on the market, but new ones keep appearing.

Hampshire company Liftmaster was showing a nicely designed Danish system at Lamma, with adjustable jaws and a handle to line up the stud holes.

One person can do the whole process and there is a chunky grip for fast lifting or lowering of the wheel. It can cope with 1m to 2.4m sizes and 1.2m wheel width. The asking price is £1,400. 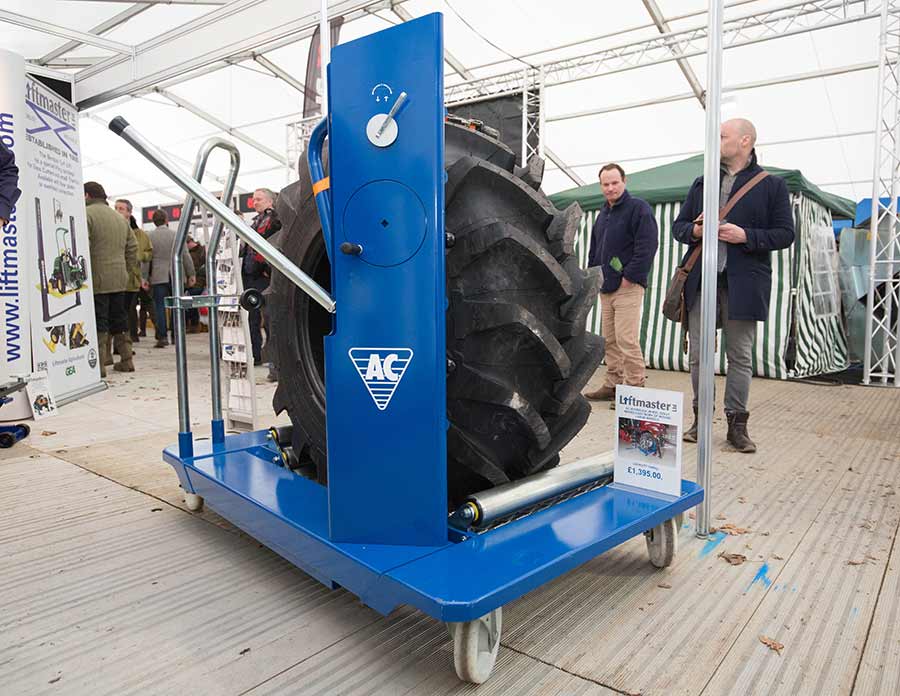