This week saw close to 50,000 farmers make their annual pilgrimage to the Peterborough Arena for the biggest farm machinery event in the British calendar.

Oliver Mark, James Andrews and Adam Clarke pick out the highlights from a chilly Lamma show. 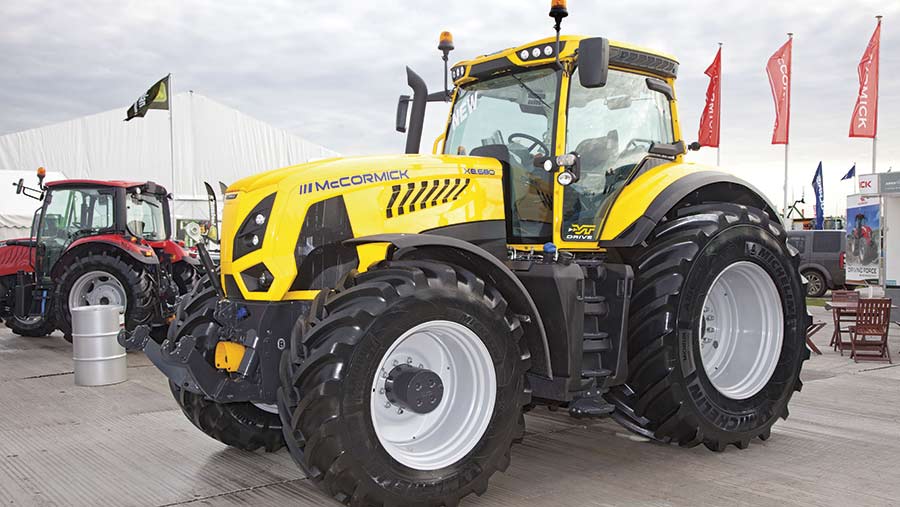 McCormick is hoping to elbow its way into the high-horsepower tractor market with the launch of its X8 series tractors that develop more than 300hp.

The range made its first appearance at Germany’s Agritechnica show in late 2015. With the testing phase now out of the way, the maker is ready to start selling the machines to UK farmers.

Like its little brother, the X7, the new range is fitted with a 6.7-litre FPT engine. However, this has been given dual turbos and a tune-up to make it man enough to power the beefier X8. In the entry-level X8.660, the block develops a max power of 264hp, with the biggest X8.680 topping out at 310hp.

All tractors will come with a ZF-built CVT transmission that has four virtual ranges and cruise control options. At the back end, the link arms are rated to lift 12t and there will be the option of a 157- or 212-litre/min hydraulic pump.

McCormick is ready to start taking orders for the X8, but full-scale production isn’t scheduled to start until September 2017. There is no word on prices. 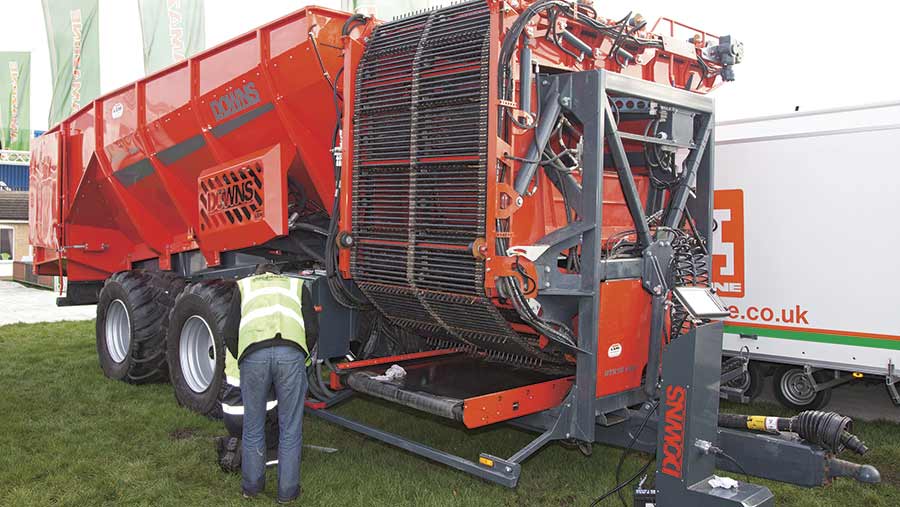 Herefordshire-based importer Miedema Mercer Machinery was showing off a novel new root trailer that doubles up as an in-field conveyer/loader.

The French-built Downs DTX Geo models come with a 18cu m or 26cu m capacity and have a rubber conveyer in the floor that transfers crop to the main 4m front elevator or a bypass transfer belt.

To convert it into an in-field loader, the chassis slides back over the wheels hydraulically until the body comes into contact with the ground. Trailers can then tip into it and the elevator takes the crop up into bulkers waiting at the headland.

All elements of the trailer are powered via a pto-driven, on-board hydraulic system that is controlled via a large touchscreen monitor. 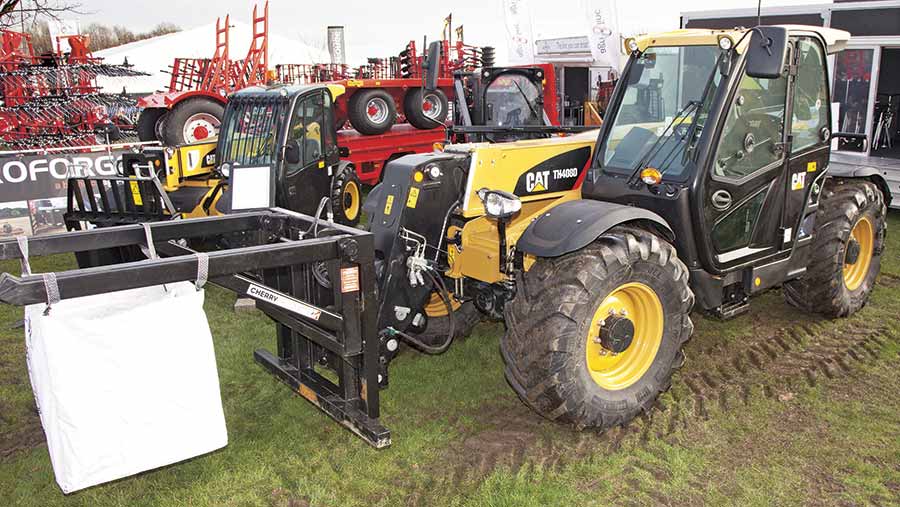 Caterpillar has updated and extended its range of agricultural-spec telehandlers, giving them more power, more reach and a slicker cabin.

The new D range replaces the outgoing C models and extend from the compact 6m TH306D up to the TH3510D, with a 10m reach.

One of the most popular models is likely to be the TH408D that replaces the TH407C. This has a lift capacity of 4t, an 8m reach and, like the rest of the models in the range, has a lower rear pivot point for better visibility.

Power comes courtesy of a 4.4-litre Caterpillar four-cylinder that delivers 125hp as standard or 145hp if you’re willing to spend some extra cash. This drives a six-speed powershift transmission controlled via buttons on the joystick.

The cab is one of the biggest improvements from an operator’s point of view with a fancier dash that includes a digital display for showing all the important info. 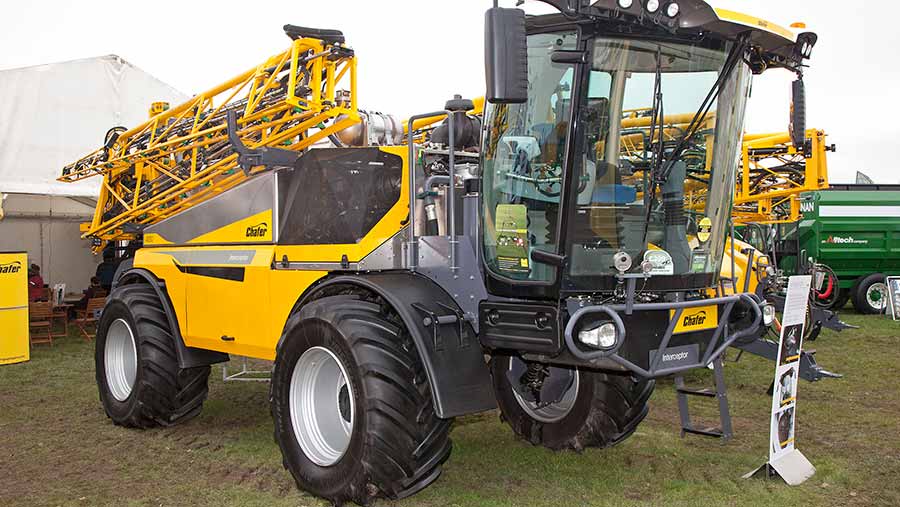 Lincolnshire-based sprayer manufacturer Chafer had its new Interceptor sprayer model, which aims to make a dent in the mid-sized self-propelled market, on show at Lamma.

Better known for its trailed and demount sprayers, the firm ended its spray pack and boom supply tie-up with Agco Challenger two years ago and has since set about building a hydrostatic self-propelled machine – Chafer’s first since 2008.

It is hoped the Interceptor will poach customers from fellow British manufacturers such as Bateman and Househam by packing the new machine with premium features typically seen at the top end of the market.

Available with 4,000-litre or 5,000-litre tank capacities, the Interceptor is powered by an up-to-date 215hp Tier 4 Deutz engine, while a Rexroth CVT gearbox aims to keep crankshaft speed and fuel consumption to a minimum.

The spray pack can be as basic or high-tech as the customer wants, with the choice of a manual or the fully automatic E-Plumbing system that has proved popular on Chafer’s trailed machines. 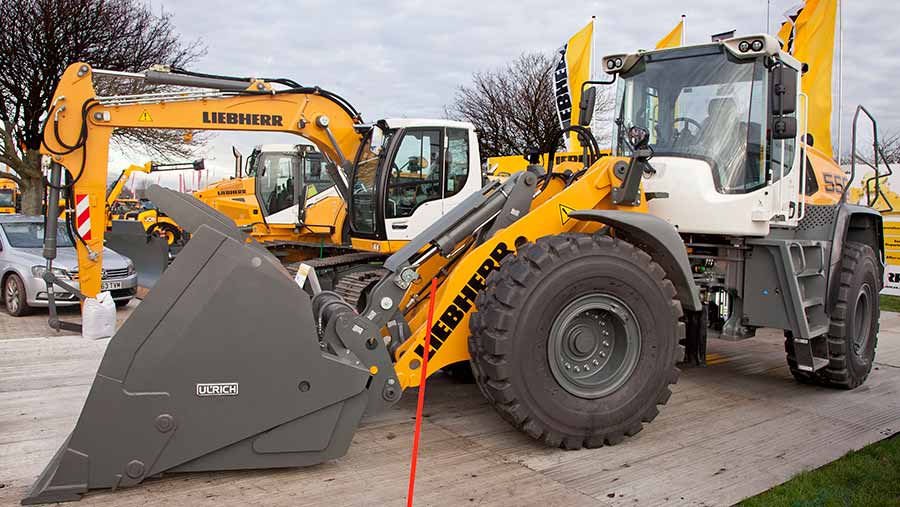 Swiss construction machinery maker Liebherr is set to push its way into the UK agricultural market with its high-capacity 550 XPower loading shovel.

Demand for shovels has been on the rise in recent years, particularly on the clamp for large-scale silage contractors and from grain store managers for quicker lorry loading.

Although there are larger models in XPower range, the firm say the 191hp 550 is more than man enough for most UK operators and a different take on design sets it apart from the competition.

Its Liebherr engine sits at the extreme rear for better weight distribution without the need for extra ballast, the company says.

A hybrid transmission combines hydrostatic and mechanical drive to ensure there is no interruption in pushing power. The engine and transmission configuration has also allowed Liebherr to put the cooling system at the side of the machine, minimising dirty air sucked into the radiator.

A tipping load of 14t straight and 12.2t fully articulated offers plenty of capacity, and a High Dump bucket option will appeal to those loading lorries or farm trailers. 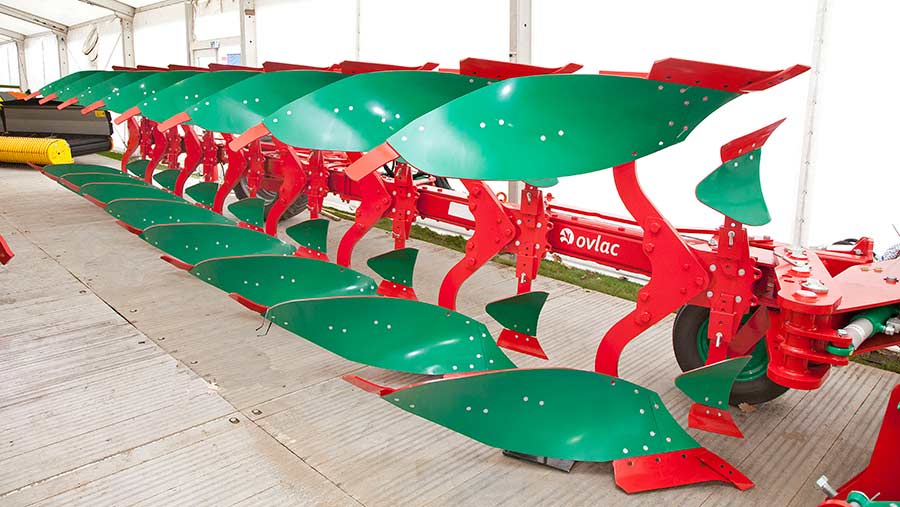 Devon-based dealer Halse of Honiton has enjoyed a successful first year selling the Ovlac range of ploughs since it took on the Spanish brand 12 months ago.

So much so, the company is bulking out its existing four-, five- and six-furrow offering with a beasty eight-body model, which heralds Ovlac’s UK debut in the 50-units-a-year semi-mounted plough market.

The seven-plus-one set-up also allows the option of taking the total furrow number to nine with a second extra body, though buyers will need a tractor of 380hp to be sure of having the muscle to match it.

Elsewhere, point-to-point clearance measures 105cm, beam height is 78cm and hydraulic vari-width is part of the package. There is also the choice of shearbolts or auto-reset protection, depending on budget and soil type.

In-furrow ploughing is possible, but realistically most of the semi-mounted machines will be run on land with GPS to keep on the straight and narrow.

The on-farm price is a shade above £32,000 and Halse currently has 19 dealers signed up – a fair way towards its target of 45 across the UK and Ireland.