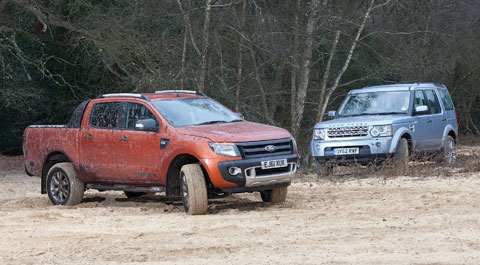 Farm pickups are more comfortable, powerful and spacious than ever before, so could they be about to knock the king – the Land Rover Discovery – off its throne? Watch the video and read the report below.

The Discovery has been the daddy of farm-related multi-tasking for years. You can chuck a sheep, a bale, a child or a mother-in-law in the boot without too much complaint from any quarter.

But farm pickups have the Disco in their sights. OK, so it might not be a completely like-for-like test, but we wanted to know just how close pickups have come to the combination of luxury and practicality offered by one of Land Rover’s biggest sellers.

Stand the pair nose-to-nose and it really comes down to personal preference. There’s nothing new in the Disco’s boxy shape – slap a different numberplate on the tinwork and you’d be hard pressed to work out when it was built.

Ours arrived with low profile rubber, blingy alloys and baby blue paintwork, but if you want it to look slightly more anonymous then don’t go so mad on the options list.

The same goes for the Ranger. Ours turned up plastered in a pretty garish shade of orange. Like all pickups, Ford’s design team have taken a butchering knife to the backend – deep load bay, big badge and pointless plastic spoiler all shout American just as much as a double cheeseburger and large fries. Things are equally as gargantuan up front and the Ford’s monstrous schnozzer towers over the Disco’s nose.

On first appearances it seems like the Ranger is the more practical vehicle for real work around the farm but when you get down to the nitty gritty it’s not quite so clear-cut.

The load bay is ultra deep which ups the volume of loose stuff you can carry but is a pain when you’re trying to reach in over the sides. And, when you compare it with the Disco there’s not actually that much more room. In fact, we reckon if you splash out on a load-liner the Land Rover’s actually a better bet in the load-carrying stakes, especially as you can lock it up. And if, you really need the space, you can always go for the commercial version.

The Ford’s interior wins in terms of mud-tolerance – the slabby plastic trim is definitely more ag-spec than the soft furnishings of the plush Disco.

If it’s a family-wagon you’re after, then the seven-seater station-wagon wins hands-down. However if you only get roped into the playgroup run once a week, the pick-up will do the job just fine. That’s one big benefit of its supersize body – knee-room is no longer the issue it was in old-school double-cabs.

Fierce competition on the pickup market means manufacturers have been forced to improve the on-road credentials of their trucks. In have come six-speed ‘boxes, extra legroom and better handling.

Indeed, the Ranger gets a six-speed setup and buyers get the option of an automatic or manual. The manual’s first cog is pretty low geared so it’s tempting to do all your pulling away in second. There’s oodles of torque on the table, but with a five-cylinder block and 3.2-litres under the bonnet we did expect it to be slightly quicker off the start line.

No danger of that being the case with the Disco, though. Its 3-litre (the only engine option on the table) is a ferocious beast. Teamed up with Land Rover/ZF’s super-slick eight-speeder, there’s no comparison when it comes to a drag race.

The blocky Disco defies physics to get up to 62mph in 9.3secs, outsprinting the Ranger by a whole second. The pair is neck and neck on consumption, too – the Ranger tallies 29.7 and the Disco 32.1mpg according to the book figures, although in reality both loitered around the 27mpg mark.

The Disco also rules victorious in the towing stakes, although this time it only gets its nose in front by 100kg.

The real difference is in comfort. Unladen, the Ranger’s leaf springs – perfectly acceptable for off-road lumps and bumps – make the ride jittery and the steering as lively as a wasabi peanut. In comparison, the Disco’s air suspension irons out the bumps to make for the smoothest of rides. You can pop up two seats in the boot, too.

Pick-ups often get a bad name when it comes to the sloppy stuff. That’s usually because they’ve been kept light over the back-end to make the most of their cargo-carrying capacity. Of course the trade-off is traction.

To try and counter that Ford has added a traction control system which apparently adapts to conditions by automatically selecting three different settings. But in truth it doesn’t seem to do much good. It slithers and squirms about like an eel trying to escape the jelly jar. With its pre-programmable computer that alters suspension height and how power is delivered through its auto box, the Disco walks all over the Ranger when things get boggy.

But much of that is down to clearance. The benefit of having air-springing means that the Land Rover can alter its ride-height depending on the terrain. On the black-top it squats right down to 185mm but jacks itself up to 310mm so that it can easily clamber over lumps and bumps without ripping open the diff casing. The Ford is fixed at 229mm – not bad for a pick-up but it does mean that it bottoms out in the ruts so that you’ll become pretty used to finding a tug.

There’s one winner in all but price. Put simply, you can have three basic-spec Fords for the price of a fully-loaded Discovery.

And the Ranger’s good. It’s one of the most comfortable pickups on the market but we weren’t awestruck by the big 3.2-litre motor – we’d stick with the standard 2.5-litre block.

Get back in the Land Rover’s driving seat and you realise it’s a true driver’s machine that means you can relax whether you’re out on the Autobahn, slithering through a gateway or trundling along the lanes. And its big boot pretty much matches the load bay of any pickup so if you can afford it then we reckon it’s worth it.

How they measure up