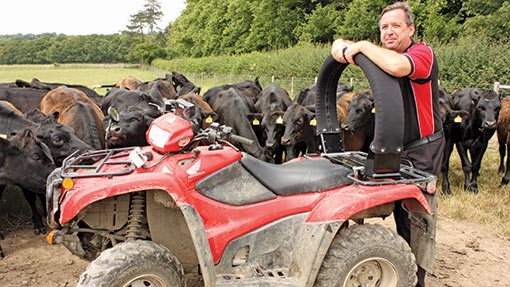 The New Zealand Lifeguard ATV rollover protector we featured a month ago is now available from Matthew Tiplady at ATV Lifeguards, and the company is looking to set-up a dealer network in the UK.

Though some attempts have been made in the past to come up with an effective way of reducing injuries when ATVs turn over, it’s thought to be the first unit that will be sold in the UK.

It’s a pretty simple idea, but looked well-executed when Farmers Weekly saw the first one to come into the UK last week.

The hoop contains no metal; instead it uses a series of segmented, thick plastic bricks held together by strong nylon cords. The whole thing is covered by a neoprene-type cover and there’s a cord tensioning system to keep the right degree of resilience.

Deaths and injuries caused by ATV overturns in Australia and New Zealand are shockingly high, says Mr Tiplady, partly because of the high usage that farmers make of them but also because of the terrain. There are believed to be 230,000 ATVs on Australian farms alone.

Most of the deaths involved the rider first falling off the vehicle and then the ATV (typical weight 250kg) falling upside down on to them. The point of the LifeGuard is to spread the weight of the vehicle evenly across the rider’s body to minimise injury and it’s rated for ATVs up to 500kg in weight.

Could the weight of the 15kg hoop itself unbalance the ATV? Mr Tiplady says not, since the only metal parts are the steel holders that attach to the ATV’s rear rack. Honda has given its dealers the OK to sell them in Australia and New Zealand, he adds.

Some 1,200 units have been sold in Australia and New Zealand since it went on sale. Cost in the UK is likely to be about £800 and the units are available from sales@atvlifeguards.com.