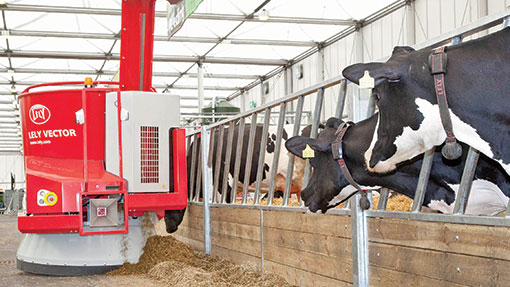 Dutch dairy giant Lely had one of the biggest stands at Livestock 2014 to demonstrate its range of robotic milking equipment.

Both the Vector feeding robot and Astronaut milking machines were out running under the watchful eye of the company’s T4C InHerd management system.

The series of nine apps are designed to work on all smartphones as a means of monitoring herd performance and are an evolution of the system originally used on the computer.

Watch the video of the feeder in action

Owners pay a yearly subscription to be able to monitor individual cows from anywhere in the world and against the same animal’s performance a month or year earlier to get a good idea of trends. Cow information available through the apps includes the quality and quantity of milk, feed intake and activity of each animal.

There are also instructions for general maintenance tasks such as how to change filters and reminders to check things such as teat cup sleeves.

See also: All the news and photos from the Livestock Event 2014