While the industry might not be awash with money, there was still plenty of shiny new kit to peruse at this year’s Livestock Event.

Exhibitors were showing everything from mixer wagons to muck spreaders, and there were also several neat management systems to help stockmen keep an eye on cow health and performance.

We’ve picked out nine of our favourites. 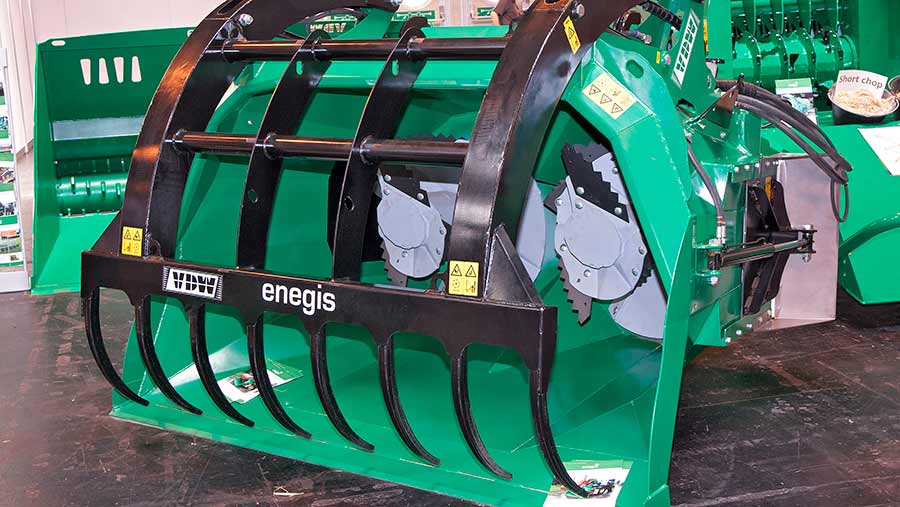 Alongside the RotoGrind range of hammer mills it markets, Warwickshire-based Enegis was showcasing a line-up of novel feed-processing loader attachments made by Belgian firm VDW.

Most eye-catching was a twin-auger feed mixing bucket, which works in just the same way to mix a small-batch TMR and feeds out through a side door.

To load there is a choice of a curved tine grapple, a shear-grab, a reciprocating knife or a de-facer rotor, depending on how much of an issue a clean clamp face is.

Available in single- or twin-auger versions from 1.2cu m to 2.6cu m, prices vary depending on spec, but as an example the 2.4cu m version on display comes in at £9,500.

In addition to these, VDW also builds a range of root chopper buckets that differ from many on the market in having a full-width chopper rotor across the heel of the bucket.

This is said to massively increase throughputs, allowing operators to process up to 60t/hour.

They are not just limited to loader applications – the company also builds electrically-driven static versions for AD plants and others to go on a tractor’s three-point linkage. 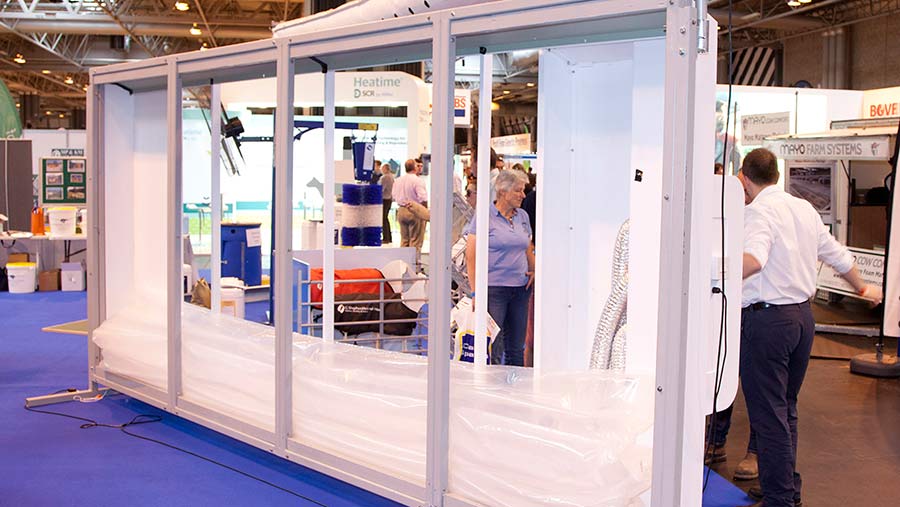 If you are looking for a means of keeping livestock buildings well ventilated but protected against the weather, then Lancashire-based Shepherd Agri might have the answer.

It is importing a clever automated inflatable walling system made by Canadian firm Secco.

The IsoCell Z-wall uses a series of long plastic sausages, wedge-shaped in cross-section, bonded together.

When inflated they rise up in tracking attached to the building’s outer stanchions to form an insulated weather-proof wall and when deflated collapse down to allow maximum airflow.

Three simple fans do all the work but it’s a weather-station controlled computer that is the clever bit.

It knows which way the wind is blowing and how strong it is, whether it is raining and what the temperature is.

It then uses this information to decide how much air to pump into the IsoCell curtain, varying the size of the opening accordingly.

Pricing depends on the length and height of the runs, but as an example an 18m long run 2m high version would cost about £3,500 while extending that to 60m would take the total closer to £10,000. 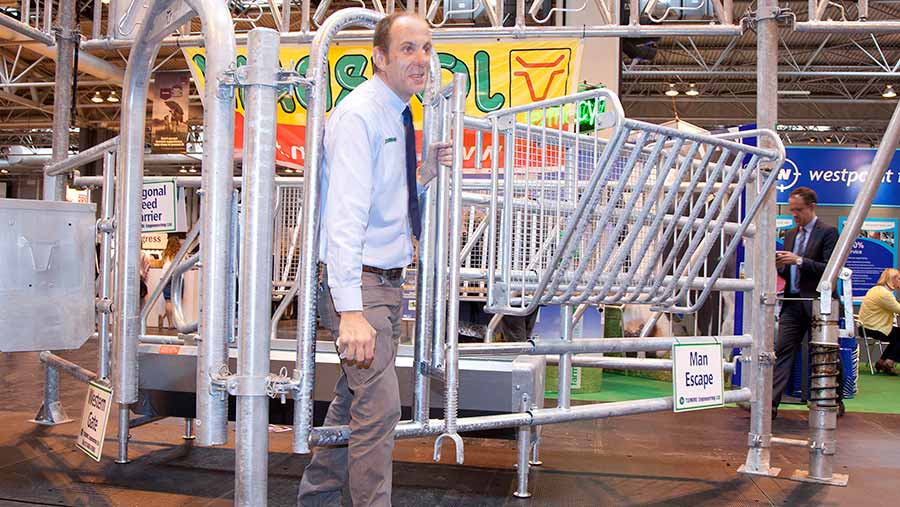 Feed barriers all have a 1m telescopic end section to ensure they can fit a range of gaps and swing freely in narrow passageways.

They also have built-in escape gates, should housed cattle start to get a bit lively.

There are also swinging barriers that incorporate a car suspension-style coil spring that aids lifting and lowering and can travel right through 360deg.

And for robot milkers there are non-return gates to make shepherding and training an easier task. 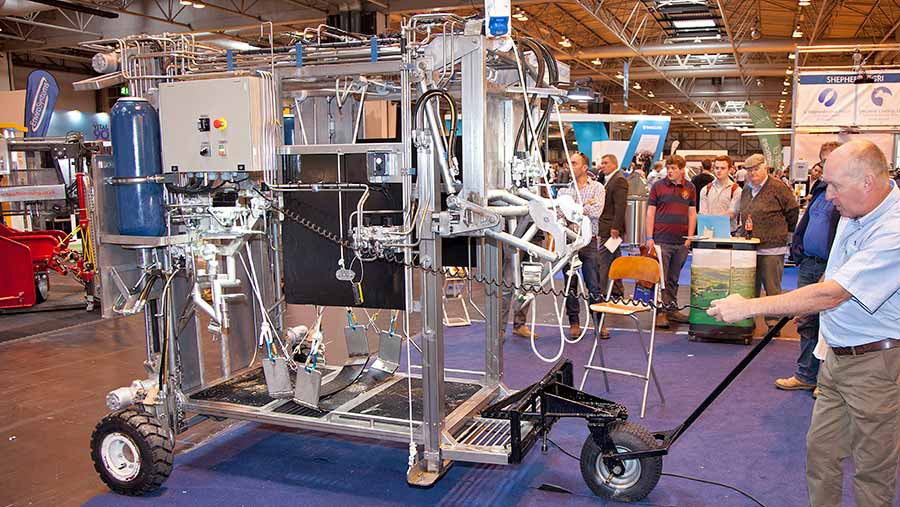 Professional hoof-trimming gear is getting ever more sophisticated to help operators get through as many cows as possible in a day.

The latest foot-trimming crush from Spanish firm Anka is no exception.

To keep noise to a minimum, the unit’s single-phase hydraulic pump is immersed in its own tank of oil. Rather than pumping all the time, it charges two big gas accumulators on either side of the crush.

These store up pressure to power each of the crush’s nine hydraulic functions.

Up front there’s the remote-controlled front gate and then back gates, belly-bands and foot lift winches are on standard spool-valves.

As a £3,500 option, buyers can choose to have powered transport wheels that jack the unit up and propel it up on to the trailer when it’s time to go home.

Built almost entirely from stainless steel and kitted out with strategically positioned LED work lamps, the Anka crush is brought into the UK by Cowsfeet.co.uk and costs £23,000.

Trimmers and farmers in certain parts of the UK may be eligible for up to 40% grants administered by the Rural Payments Agency. 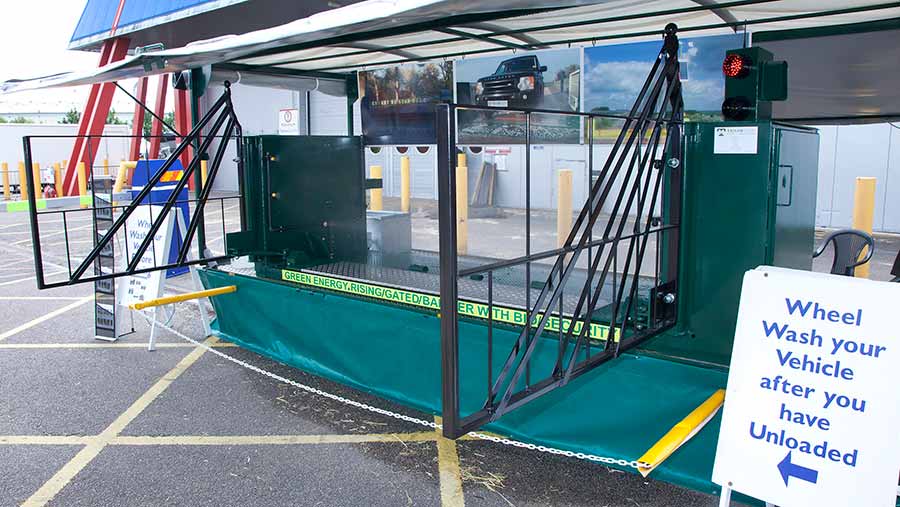 For livestock units where biosecurity is an issue (as well as keeping intruders out), the latest version of Tailor Made’s road-blocker might be of interest.

Vehicles are brought to a halt by the hydraulically folding ramp, before a series of spray nozzles go to work to douse the underbelly and running gear with disinfectant.

At a signal from either key fob, mobile phone or keypad, the ramp will then drop, allowing vehicles to proceed.

The relatively small hydraulic power pack runs on a 12V circuit with a battery charged by both solar panels and a small wind turbine. 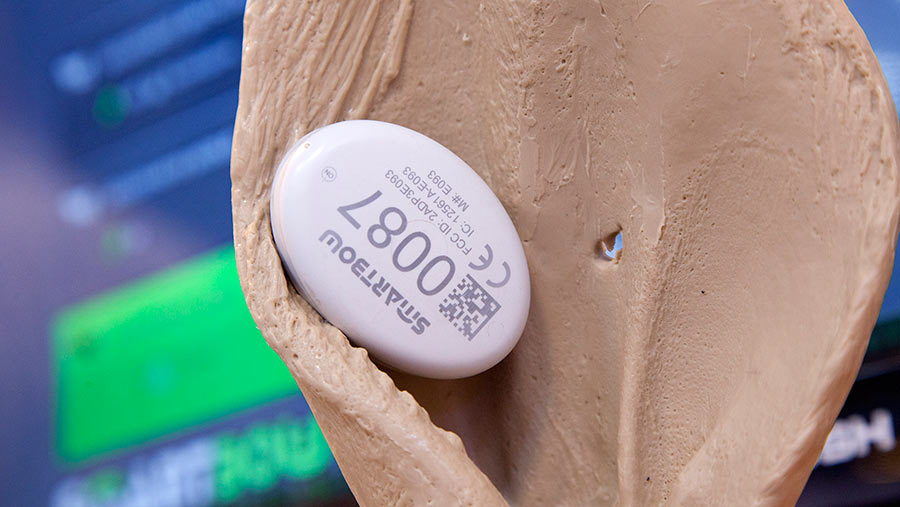 Perhaps best known for advising on robotic milking set-ups, Tim Gibson is now marketing a range of intelligent eartags that can be used for heat detection, rumination monitoring and locating an animal’s exact position within a building.

Using a wi-fi network, the tags monitor animal activity to give an indication of oestrus.

Clever accelerometers within them can detect cudding by ear movement and thus rumination levels enabling stockmen to more accurately identify cows with health issues such as displaced abomasums.

Clearly, the system offers the potential for labour savings but it comes at a cost – £69-£129 a tag, depending how many parameters the tag needs to measure. 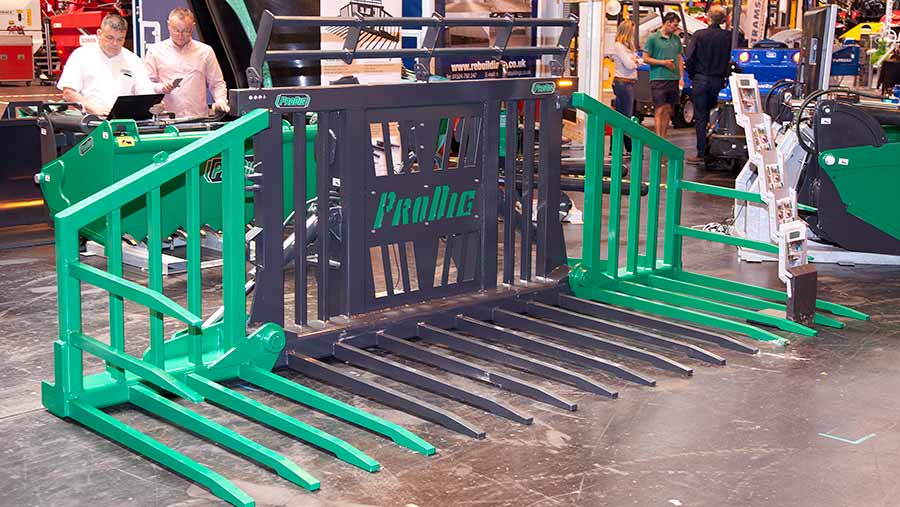 Square-section Hardox tines are standard, as are gas-accumulators for the fold rams – said to be critical in protecting the hinge points from excessive wear.

Phosphorus bronze bushes are used with double grease races around the 60mm pins.

All models fold to within 2.6m for transport and there are neat flashing amber LEDs and marker lights built into the box-section frame.

Pushing up silage at the feed barrier at least a couple of times a day can have a big impact on dry matter intakes as well as reducing wastage, according to Somerset-based Kitt Agri.

While many home-built tyre pushers and blades do the job perfectly well, being one-sided and mono-directional they often result in feed travelling to one particular end of the shed after multiple runs.

Kitt argues that its Double-V pusher does away with this issue because it can be used in both directions with the result that feed remains evenly spread along the barrier.

A recycled plastic blade also helps ensure there are no issues with unwanted wires making their way into the diet as can be the case with tyre-type pushers. 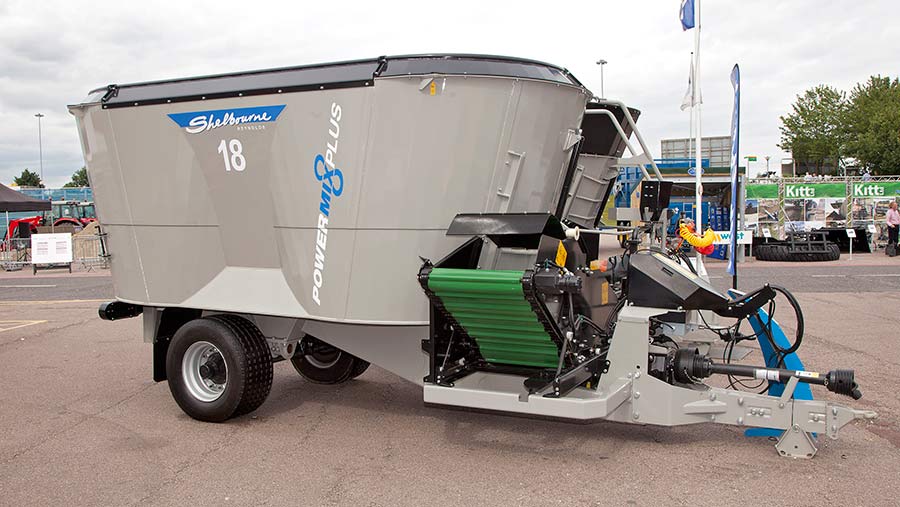 Shelbourne Reynolds’ short wheelbase PowerSpread muck and slurry spreaders have had a bit of a revamp.

The 8,000-litre and 10,500-litre single-axle models have redesigned axle mountings that means they sit slightly lower in the chassis and can be kitted out with 620mm wide radial rubber.

Being lower, they are said to be more stable and are also easier to load. Prices start from £25,899.

They have sculpted side-walls to improve mixing and a stepped chassis that’s integrated into the tub.

Not only does this simplify the build, it also makes the wagon about £1,000 cheaper than a standard machine because there is less welding involved.