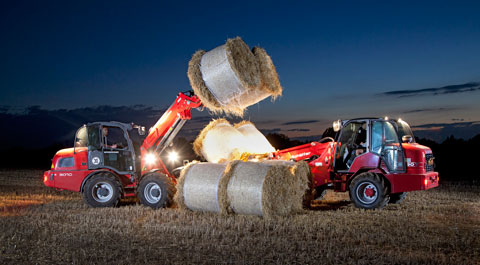 Two well-built and closely matched rivals. If shed space is a tad tight then the Weidemann is the obvious choice. If you value your cab space then go for the Schaeffer.

When it comes to telehandlers you’re generally a pivot-steer man or a four-wheel steer man. Rarely both.

Nothing speaks legendary pivot quite like a 20-year-old Matbro TR250. Built at a time when the British-owned firm hogged as much as a quarter of the telehandler market, it has now become the benchmark for bend-in-the-middle machines.

But if you want a new one, your choices are limited. Matbro is long gone and JCB now dominates the field with its TM-series handlers. Manitou is reluctant to push its latest MLA pivot-steer (an evolution of the machines built by Irish firm Redrock and now assembled by French feeder manufacturer Lucas G), and wasn’t able to supply one for testing.

In Europe, only the Germans match our British fondness for pivot-steer loaders. So, we’ve picked two of their difficult-to-tell-apart, cherry-red rivals – Schaeffer’s 8090T and the Weidemann 3070 – to see if they can match the Mathew Brothers’ 1990s bestseller. (We had hoped to include a new arrival from Italian firm Dieci, too, but it didn’t get to us on time.)

How they measure up

All three of our test machines have different engines. While the bombproof Matbro has a chuggy 100hp, four-pot Perkins tucked in the tail, the Weidemann uses a 3.6-litre, 74hp Deutz unit.

Schaeffer, meanwhile, throws a Kubota powerplant into the mix. It’s the engine of choice for all of Schaeffer’s mid-size machines – including the 86hp version in the 8090 – while a Deutz motor goes into those above 100hp.

Most of these will wind up on dairy farms where routine maintenance isn’t always top of the priority list. But for those that do break the stockman mould, the Weidemann is the winner.

Tugging an in-cab toggle opens the bonnet gaping wide. The engine and radiator hang low in the frame and all the maintenance vitals are grouped to the left side. Another groovy feature is the hydraulic tilting cab if you need to access anything underneath.

The Schaeffer doesn’t quite match its rival – the bonnet folds forwards and the radiator sits high to restrict access for all but the nimble-fingered and ambidextrous – but in reality it’s perfectly good. One downside is that the bonnet, door and ignition require separate keys. 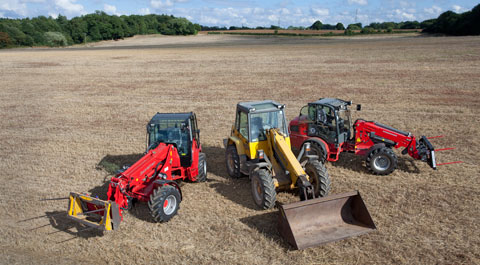 Matbro’s four-speed torque convertor powershift is a heavyweight combination that now tends to be used only on the most powerful machines in makers’ ranges.

And, while the veteran load-lugger uses a left-hand shuttle-shifter that most of us could work in our sleep, our two new contenders to the throne have abandoned the old-school and put the shuttle switch on the joystick.

Both have two-speed hydrostatic drive, the Weidemann notching between ranges with a colour-coded joystick button.

Speed changes on the Schaeffer are a little more disguised – a flick-switch on the back of the joystick jumps between the two ratios of the hydrostatic drive.

Neither is built for too much tarmac travel, but the Schaeffer nudges 35kph compared with the Weidemann’s 30kph. 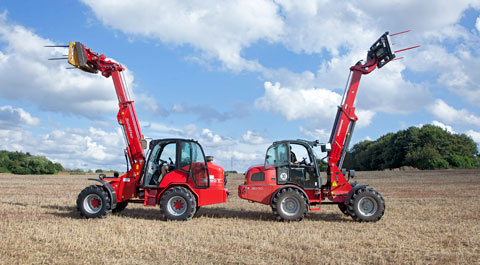 Despite being the smaller, lighter-weight machine the Weidemann holds its own in the hydraulics department and its muscle seems well-matched to the Schaeffer’s.

In fact, the smaller machine will churn out more oil than its rival, albeit at a slightly lower pressure. The end results is pretty similar, although having a lighter back-end means true tearout force isn’t quite so impressive in well-rotted muck.

Hydraulic controls are arranged logically in the cab and one plus over its rival is the proportional hydraulic auxiliaries. Boom in/out is managed by a joystick roller – a better bet than Schaeffer’s grab-and-twist joystick system to extend the boom.

Below the joystick is an assortment of switches to control the two-stage boom suspension, hydraulic system pressure relief and a joystick lockout switch.

The Schaeffer shares similar functions, but tracking them down can be a bit of a goose chase.

The controls lack the sort of organisation you’d expect from a German. Colour co-ordination isn’t a Schaeffer strength – the horseshoe of multicoloured joystick buttons is particularly baffling.

Matbro’s cab is a veritable crystal palace – a loader-mounted glasshouse with views all around.

Our two contenders still have a bit of work to do to match the size and space of the Yellow Peril’s cockpit. The Schaeffer comes closest to dethroning the king, providing legroom, headroom and somewhere to sit the dog.

It wins on storage space, too, including a small box that doubles as a passenger perch. The doors almost equal the size of the Matbro’s (and it’s an easier climb in) but there are no side windows, although the doors can be latched slightly ajar to let the breeze in.

While the Weidemann is beaten handsomely when it comes to space, it scores well for ergonomics.

Unless you’re a lanky operator you can learn to love it – the cocoon-like cab feels a little like any good-sized mini-digger. The downsides are that the metal joystick casing can bash against your knee and it gets pretty hot after half-an-hour’s work.

But the opening windows make the cab feel larger than it is and you can remove the gas struts if you like to leave it doorless.

Noise-wise it wins, too. The pair is pretty evenly matched at about 68dB at tickover, but a dose of right boot up to 2,000rpm and the Schaeffer roared away at 80.5dB (although Schaeffer disputes this) compared with the more reserved Weidemann at 75.5dB. 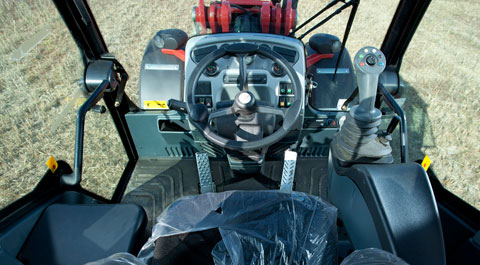 The Schaeffer has a decent-sized cab and there’s a reasonable amount of storage. 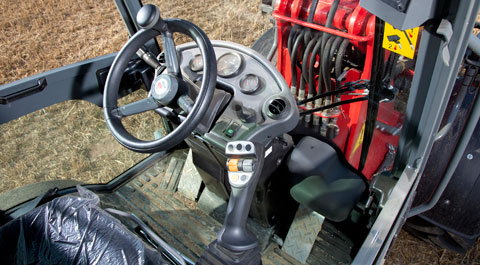 Weidemann’s cabin is pokier than the Schaeffer’s, but the controls are easier to fathom.

Stock duties await most pivot-steer machines of this size.

The Schaeffer is the more brawny, heavier machine. Very thick plate across the headstock and frame adds to a decent weight advantage and, because of the difference in engine size, it has more pushing power on the muck heap. A track width of 2.07m makes it more than 200mm wider than the Weidemann, while the 2.44m wheelbase makes it just over 300mm longer – not a major problem unless you’re working in tight livestock sheds.

It does make it a little more clumsy when it comes to turning, though. The Schaeffer takes 9.20m to spin on the spot, while the tight turning Weidemann can do it in just 7.60m.

They also differ in chassis set-up. Schaeffer’s axle oscillation provides a more comfortable ride than the twisting pivot of the Weidemann, which can make for an uncomfortable ride bouncing over harvest stubbles. 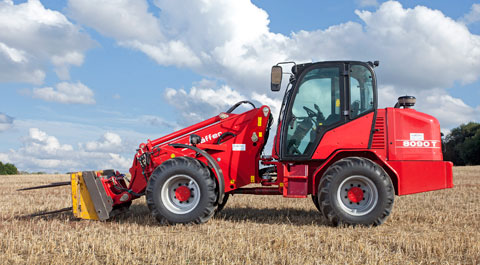