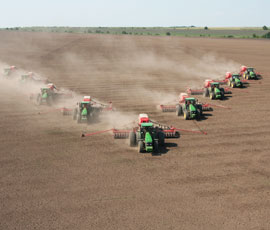 Farm machinery makers around the world are expecting sales to total €72bn in 2012, compared to €65bn in 2010. That’s a 10-15% jump in output over the two-year period and comes after three years of falling sales.

The main reasons cited are farmer’s continuing need to replace older machines with ones that have higher workrates. However, higher commodity prices plus an improvement in the fortunes of some eastern European farmers are having an effect too.

These predicted improvements come after a big drop in sales in 2008-09 that the VDMA says brought many makers close to or into a loss situation.

Germany, which is Europe’s biggest machinery maker, saw particularly big drops in output in that period, largely because of the collapse of sales in Eastern Europe.

While some Eastern European countries (such as Poland) are now enjoying healthy farm machinery markets, others are still being slow to take off. There is also considerable scope for improved sales in Russia, says the VDMA.