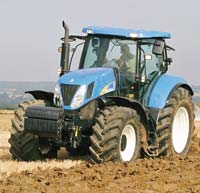 The weakness of the pound and the credit crunch may have made selling farm machinery in the UK and abroad trickier over the past few months, but sales prospects are holding up well.

That’s the interpretation many in the UK farm machinery sector are putting on the current state of the market on the eve of next week’s important LAMMA machinery show at Newark.

At New Holland, which makes tractors from 100hp to 220hp at Basildon, Essex, business director of UK and Ireland Andrew Watson said the weakness of the pound meant exports were looking more attractive. But the higher cost of components brought in from Europe was cancelling out some of that benefit.

Moreover whole tractors brought in from other CNH plants in Europe were costing 28% more than this time last year. Tractor prices have risen to try to claw some of that back, he said, but a big chunk is having to be absorbed by the manufacturer.

But forward orders in the UK were still looking pretty strong, he added, helped by the boost to Single Farm Payments caused by the weak pound.

Roughly a third of JCB’s tractors are exported to Europe and the weakness of the pound has made them more financially attractive, he pointed out. However components like tyres and hydraulics are sourced from Europe and have increased the cost of production.

The credit crunch is having an adverse effect on tractor sales in eastern Europe, he says, but that is balanced by continuing strong demand in western Europe and the USA.

Importers have been particularly affected by the effect of the weak pound for some time. “In terms of the differential between the changing currencies, machinery prices could have risen by up to 35%, but this has obviously not all been passed on to farmers,” says Simon Brown at cultivation and forage machinery maker Amazone UK.

Over December alone there was an 18% drop in the value of the pound, he says, and the company waited until the New Year to decide what to do. “The strengthening pound has brought some relief, and if it continues to strengthen of course this will be passed back to the farmer wherever possible.”

The slackening world machinery market will also give manufacturers a chance to consolidate, he comments. “We have gone through a period of such growth expansion, particularly in 2008, and we would have struggled to sustain this year after year. This gives us a chance to improve our level of service.”

UK company Simbahas two hats to wear, points out sales director Guy Leversha. On its Horsch drills, which are from Germany, it has introduced a surcharge of 10%, but only so long as the pound remains at E1.10.

But for Simba products, a weakening pound has made them more competitive in certain export markets and the company is now turning its attention to sourcing more and more of its components from the UK.

However, the freeze on credit means that east European markets have contracted almost overnight.