In the latest instalment of our series looking back over the history of machinery developments, Mike Williams charts the rise of four-wheel drive tractors and how they have become the norm.

Four-wheel drive is a must-have feature on medium- and high-horsepower tractors but it took more than 60 years for the farming industry to decide it was a good idea.

The first farm vehicle with four-wheel drive was probably a Rubicon steam engine built in the USA in about 1886 by the Wood, Taber & Morse Company.

It used a series of large, externally mounted gears to drive the front and rear wheels, but the idea attracted little interest.

Image from the Collections of The Henry Ford

Steam power on farms was used mainly for stationary equipment such as threshing machines and for haulage, and it was rarely used for field work, where the extra cost of four-wheel drive could offer benefits.

Few of the 4WD Rubicon engines were sold, and a rare survivor is in the Henry Ford Museum in the USA.

In 1889, a few years after the 4WD traction engine was built, the world’s first tractor began working in the USA, starting a new age in power farming.

Apart from a few tracklayers, all tractors were two-wheel drive until a big increase in tractor sales during the 1914-18 war encouraged experiments with different ideas.

At least four of them produced one-wheel drive models, with the powered wheel at the rear and two wheels at the front for steering, and there were also several four-wheel drive tractors.

With one-wheel drive and four-wheel drive models attracting few customers, three-wheel drive was the next option, and this time it was a machine built in Scotland.

Called the Glasgow tractor, it was available from 1919 with a 27hp Waukesha engine from the USA driving the two front wheels and one at the rear. 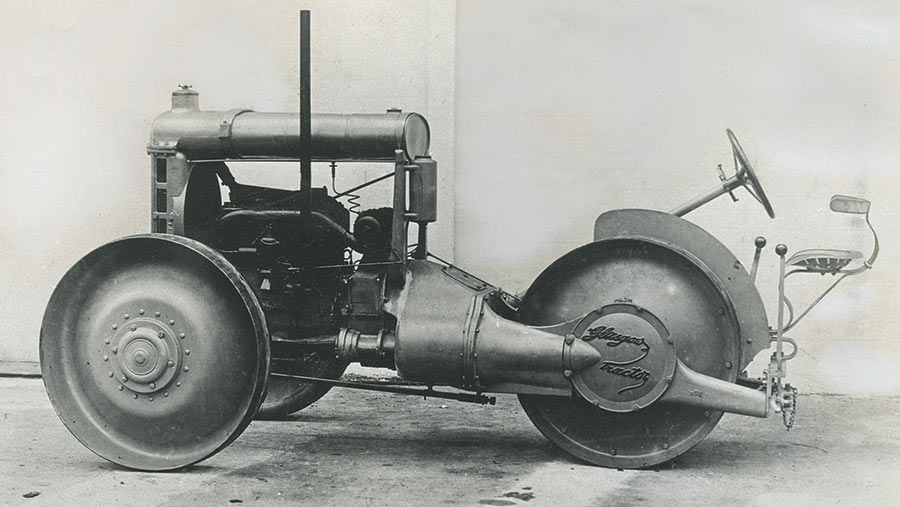 The production target was 5,000 tractors per year, but the average was probably fewer than 500 per year, according to one estimate, and the company ceased trading in 1924.

The unfamiliar drive system may have discouraged some customers but price was the big problem – starting at £450 and later reduced to £375, when Henry Ford’s mass-produced Fordson was selling for £120 in the UK.

The few attempts at four-wheel drive development in Europe during the 1920s included a tractor from Lanz in Germany with large-diameter front and rear wheels, and Pavesi in Italy produced the P4 with articulated steering.

There were few sales as the majority of customers still ignored 4WD and chose steel-tracked crawler tractors when increased pulling efficiency was needed.

Attempts to persuade farmers to switch from standard 2WD models had so far come from small companies with limited resources, but the General Purpose four-wheel drive tractor announced in 1930 was developed by Canadian based Massey-Harris, one of the world’s leading farm equipment companies and the forerunner of Massey Ferguson. 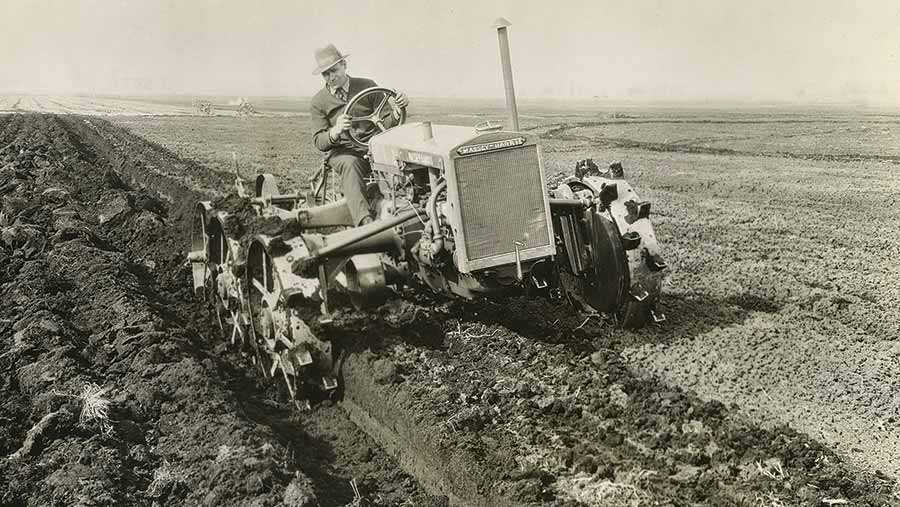 Massey-Harris was the first major manufacturer to offer 4WD, and the General Purpose was said to be the result of a long research and development programme.

It was equipped with a 25hp Hercules petrol engine with the power delivered through a three-speed gearbox to large diameter front and rear wheels.

Electric starting was an unusual option and rubber tyres were available later, but sales were disappointing and production ended in 1936.

Poor sales figures for the General Purpose tractor probably discouraged other manufacturers from offering four-wheel drive, as there was a gap of nearly 20 years before significant 4WD activity was resumed, and this time the leaders were mainly British and German.

One of the targets for British and US bombing raids during the Second World War was a Daimler-Benz factory at Gaggenau making Mercedes-Benz trucks and equipment for the German military.

When the war ended in 1945, most of the factory had been destroyed, leaving some former employees without a job.

One of them was an engineer named Albert Friedrich, who used his spare time to design a tractor that featured four-wheel drive, a passenger seat and a load space at the rear.

When it was shown for the first time at the 1948 DLG event it attracted enormous interest and in 1951, with the Gaggenau factory rebuilt, the tractor became a Mercedes-Benz product under the Unimog name, the start of a success story that has already lasted 70 years.

A British company called County Commercial Cars made its first move into the tractor market in 1948 with a tracklayer conversion based on the Fordson Major and known as the County Full Track or CFT. 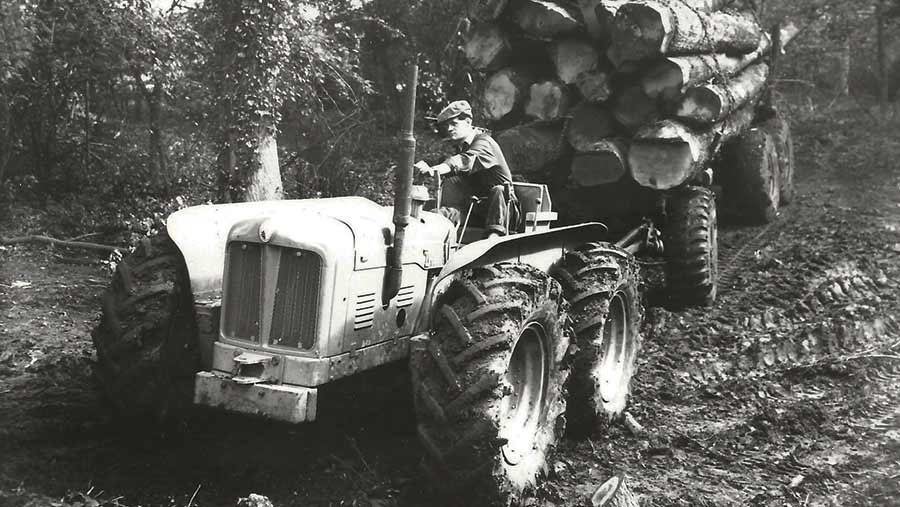 Its first four-wheel drive model in 1954 was called the Four-Drive and was developed for the West Indies to be used for hauling sugar cane from the fields for processing.

The Fordson based Four-Drive was effectively a 4WD conversion of the CFT with chain drives to big diameter front and rear wheels plus skid steering.

As well as sugar cane transport, the Four-Drive was used for other heavy-duty haulage work such as  timber extraction, prompting County to develop additional 4WD models using conventional steering and shaft drives.

To cope with the increasing demand for their new models, County stopped making  tracklayers in 1964 to become a four-wheel drive specialist, with rapidly increasing sales in the UK and a long list of export markets. 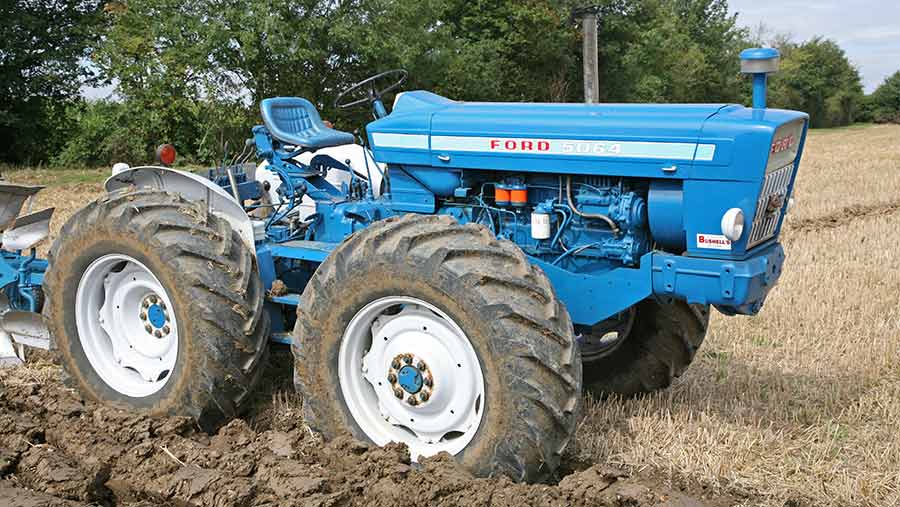 Perhaps realising that the popularity of four-wheel drive tractors could affect the demand for tracklayers, it offered its first 4WD model in 1956. Based on a Fordson, it used powered front wheel equipment made in Italy by Selene.

Another of the UK’s new 4WD arrivals was the Doe Dual Drive or Triple-D tractor, which started as a do-it-yourself project in a farm workshop.

It was the early 1950s and George Pryor needed a more powerful tractor for the heavy clay soil on his Essex farm, but he also wanted to avoid the limitations of steel-tracked crawler models available in what was then the high-horsepower sector.

He decided to build his own tractor, joining two Fordsons together end-to-end with the front wheels and axles removed from both, and with two engines, two gearboxes as well as two pairs of rear wheels providing four-wheel drive.

There was plenty of local interest in the tractor when it started working. Ernest Doe & Sons, the Essex-based Fordson dealer, realised other farmers could be interested in a tractor based on Mr Pryor’s design. 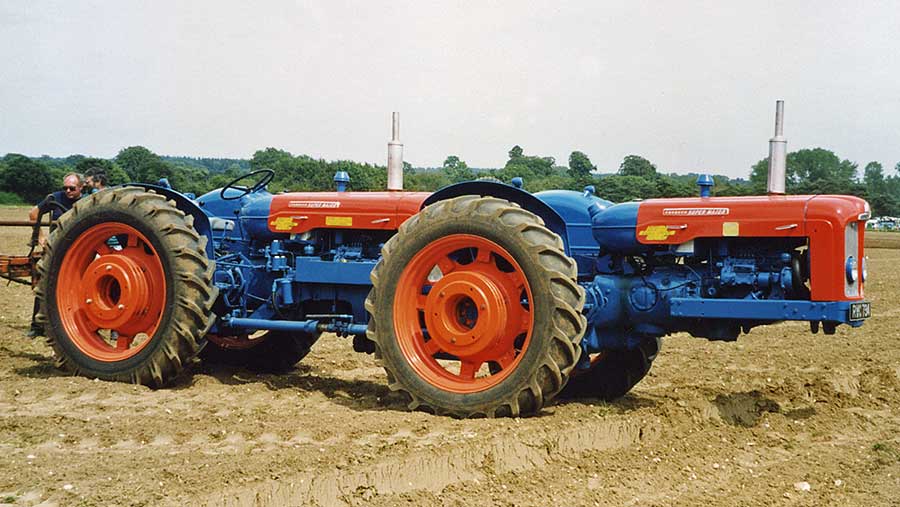 An agreement was signed to develop the tandem tractor commercially and Doe Triple-D production began in 1958, based on two Fordsons. It produced 100hp with four-wheel drive at a time when 2WD was the norm and anything above about 50hp was a big tractor.

More than 300 Doe tractors were built over a 12-year period, and the tandem layout was also adopted for small-scale production in other countries.

UK companies attracted by four-wheel drive sales growth also included Muir-Hill, which started production in 1966 with the Ford-powered 101 model, plus smaller-scale makers such as Bray, Chaseside, Matbro and Northrop. 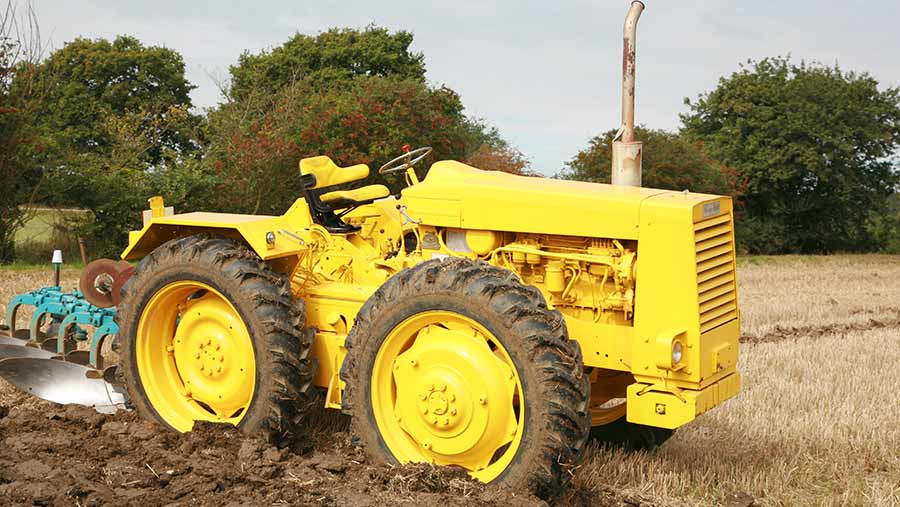 A similar pattern emerged in the USA and Canada, with the demand for more power and better traction bringing specialist companies into the market.

Steiger was an example, started by two brothers who built their own tractor in 1957/58 for the family farm, prompting requests from others wanting a similar tractor.

Four-wheel drive production at the Versatile factory in Canada began in 1966 with petrol- and diesel-powered 100hp models, and more powerful tractors followed.

Other specialist makers included Big Bud in America, and Waltanna began building high-powered 4WDs in Australia in about 1975.

The sales growth was good news for the 4WD specialists, but the success story did not have a happy ending. Four-wheel drive popularity was rising rapidly from 9% of new UK tractors in 1977 to reach 39% in 1982.

While tractors with four powered wheels were selling in small numbers, the big, established companies took little interest, concentrating instead on the high volume 2WD sector.

But with 4WD sales now growing so fast, the big names in the industry moved in and took over the market the specialists had developed. 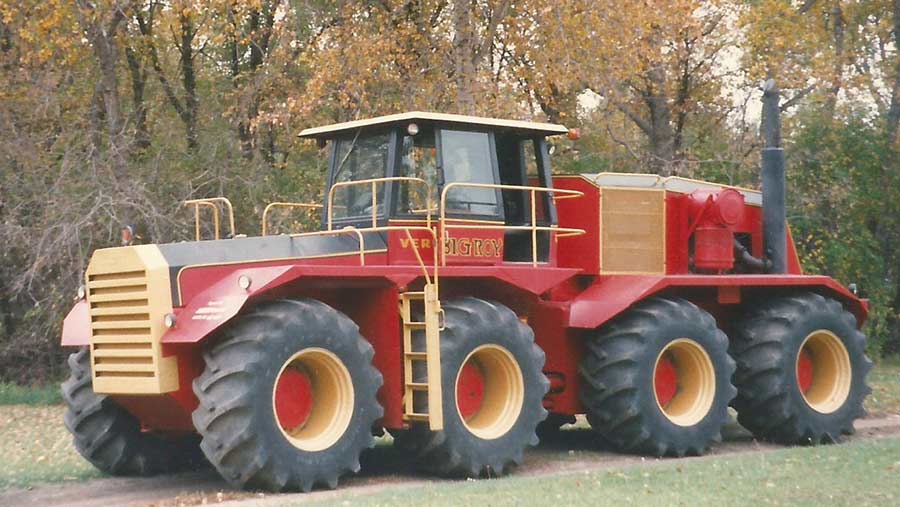 While four-wheel drive was taking over to become easily the dominant method for converting engine output into pulling power, experiments with alternative systems continued. Versatile produced the most eye-catching example when it chose eight-wheel drive for the 600hp Big Roy tractor in 1977.

It was easily the most powerful tractor at the time and a prototype version attracted plenty of publicity, but there were a number of design problems and the project was abandoned.

Six-wheel drive made a brief appearance in 1976 on the 1502 model built in Finland by Valmet – now called Valtra. It was a big tractor by 1970s standards with a 135hp engine, but there were few sales. Six-wheel drive reappeared in 2007 on the experimental TriSix tractor from Fendt. 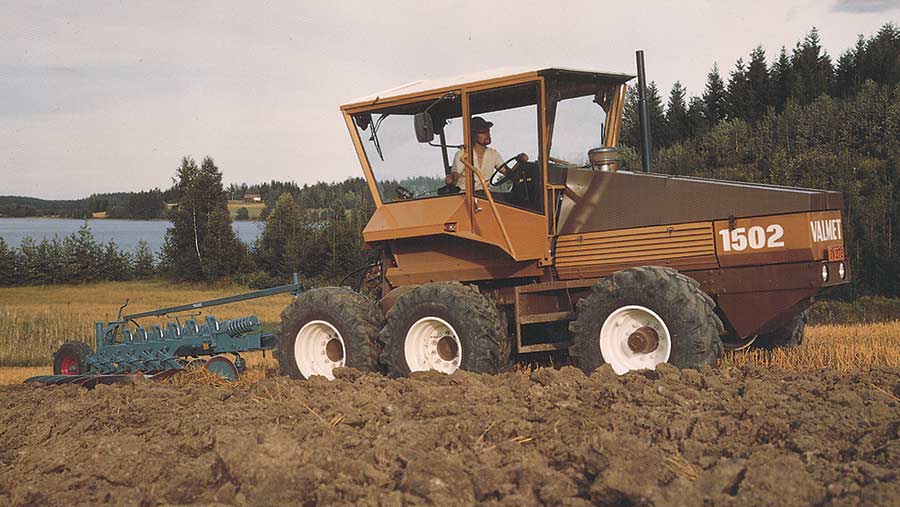 It was powered by a 540hp MAN engine and a Vario transmission provided a 65kph top speed, but it has not appeared as a production model.

A different approach to traction efficiency arrived in 1996, when Case IH introduced the first of its high-horsepower Quadtrac tractors with the power delivered through four tracks instead of four wheels. 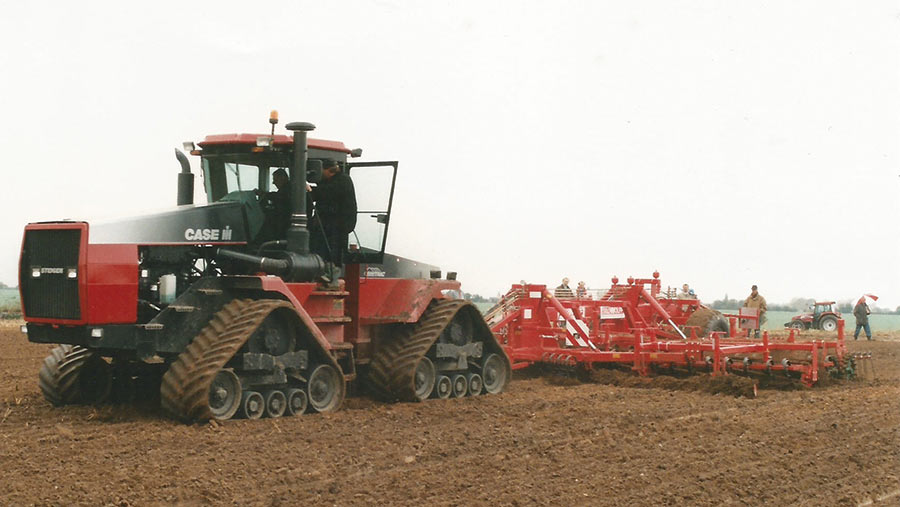 Said to combine the benefits of both four-wheel drive and rubber tracks and backed by more than 20 years of sales success, four-track drive (or 4TD) also features on the John Deere 9RX and Versatile DT tractors, suggesting it could be extending its influence in the high-horsepower sector.