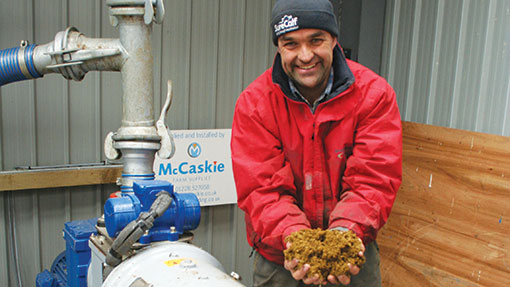 Green bedding may not be a term you’re familiar with, but it looks set for a surge of popularity in the UK. It’s a clever way of producing a material that can cut cubicle management costs and improve cow welfare.

He says that the company has more than 50 units working in the UK since the first installation 18 months ago and the market could well settle down at 100 units a year for the next few years.

Throughout Europe there are now more than 500 units at work and new models are coming along.

There’s also now a Bauer plug-and-play separator for large farms and contractors. The pump, control panel and separator are all one unit and pallet fork slots mean that it can be relatively quickly moved from place to place.

“It could be an ideal solution for the growing number of farms with more than one dairy unit and slurry storage and handling facilities,” says Mr Tindall. “It could also give contractors a new service.”

Three versions are available. Two are standard separators with outputs of 30cu m/hour and 40cu m/hour and producing 32% material, while the third is a green bedding version producing drier 36-38% DM material.

While regular green bedding has to be used the same day, farmers who want to store the material for a day or two have the option of going for the extra-drying Bedding Recovery Unit. This uses what amounts to a giant tumble drier (though without heating) to take dry matter levels to 40-42%.

Two full-sized models for 1,000- and 2,000-cow herds have been on the market for some time (there’s already one in the UK and about 70 around the world), with extra control and automation features added. But there’s now a smaller version for farmers with about 500 cows.

The undigested fibres separated from slurry spend about 20 hours at a temperature of 65-70C, which kills all the bugs and leaves a very stable product.

Bauer has also launched a new 3kW Compact separator model for smaller dairy and pig farms. Typical output is 5cu m/hour for cattle slurry and 7-10cu m/hour for pig slurry and it’s aimed at herds of up to 150 cows.

The 1.3m-long and 0.7m-wide separator is physically smaller than the company’s existing S655 model (for herds up to 400 cows) and the S855 (for herds of more than 400 cows). Slurry is fed into the housing from one side and pushed to the front by the screw, which turns at just 19rpm.

Liquid is squeezed through 0.25mm-1mm slotted screens and yields a fibrous material with a dry matter content between 25% and 28%.

ALL YOU NEED TO KNOW ABOUT GREEN BEDDING

What is green bedding?

Green bedding is Bauer’s name for RMS (recycled manure solids). It’s a technique that was originally pioneered in the USA in the early 1990s and involves taking cow manure and putting it through a powerful screw press.

An auger pushes the manure through a fine mesh and removes everything other than the undigested fibres. This produces a peat-like material that has very little odour.

A dry matter level above 35% is essential, however it needs to be used that day and not left in a pile. A layer of 2-5cm on mattresses or 7.5cm on concrete gives a comfortable bed for cows, says Bauer’s Adrian Mr Tindall, and reduces hock injuries.

UK users (such as Cumbrian farmer Richard Threlfell, pictured above) have experienced either stable or reductions in cell counts, he adds, and some farmers have reported a drop in mastitis cases after installing a green bedding system. The technique is also popular in Denmark, Holland, France and Germany.

How does it compare with sand?

Sand is a comfortable product and cows like it. However DairyCo reckons that the average cost of sand for a 400-cow herd is £1.40/day compared with 71p/for green bedding. Also, sand is very hard on pumps and tends to reduce the capacity of slurry lagoons.

The potential downside of green bedding is that it can’t be stored and management must be good.

The technique has garnered some controversy. However Defra decided in April to continue to permit the use of so-called RMS for dairy cattle provided that farmers comply with a set of conditions defined by a DairyCo-led stakeholder group consisting of farming unions, vets, consultants and equipment suppliers.

“Using this technology sensibly is largely a matter of common sense,” says Mr Tindall. “It works best in sound, well-ventilated cubicle buildings where the bedding material can dry out properly.”

“For the same reason, we recommend building up a bed or using it on mattresses in no more than 2in layers and then cleaning and managing the bed as you would with any other material. To maintain a disease-control strategy, this material should only be used on the farm where it was produced.”

“We’ve installed green bedding separators on farms with just 120 cows up to ones with 1,700 cows,” says Mr Tindall. “Users say that they get longer cow lying times, increased milk yield and fewer ailments such as hock abrasions.”