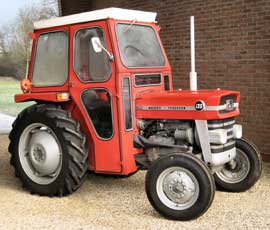 Check the clock on your old tractor and it will probably make you squint. 20,000 hours isn’t uncommon, and in some cases they have been kicking around so long that many of those vitals like the fuel gauge and engine temperature have stopped working completely.

After years of hard work, some of the golden generation’s tractors (’70s gems include the Ford 5000 and Leyland 272) should be well into retirement, maybe coupled up to a topper for a bit of summer grass cutting.

Take a whistlestop tour of dairy farms around the country, though, and 30+-year-old tractors probably account for a decent proportion of scraper tractors as they slip unceremoniously down the tractor pecking order.

But not this Massey Ferguson 135. It’s a box-fresh version that’s remained in pristine condition since it was put together in 1977. And so it should be, as it’s only got five (yes, FIVE) hours on the clock. In fact, the tractor has pretty much sat idle and mothballed since its purchase.

It’s part of the Eric Elliot Collection which consists of around 50 tractors, as well as spares and miscellanea, due to be auctioned by Cheffins on 14 April 2012.

A look at the line up is sure to get vintage tractor enthusiasts salivating. There are some rare machines from Marshall, Ferguson Brown, Ford and Fordson – alongside the Fergie – as well as a restored Case LA and Catepillar R2.

How many hours have your tractors done? Join the discussion