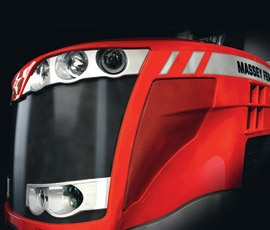 Massey Ferguson has been beavering away building a stack of new machinery. James Andrews travelled to Germany to see some of the latest offerings in the flesh


Massey Ferguson is hoping to muscle its way back into the combining premier league by launching upgraded versions of its high-output harvesters.

The revamped Delta rotary and Centora eight-walker combines now have a quieter cab and Fendt-based electronics, as well as a series of tweaks to help them gobble up more crop. They’ll also be getting a custom-built track option from Camoplast and new engines to meet Tier 4 final emissions regulations.

The new cab is pretty much the same as the one fitted on the smaller Beta machines launched last year. It has better visibility than the old one and because the glass has been covered with a special film, MF claims it’s one of the quietest on the market.

Controls have been changed quite a bit, too, and look as if they’ve been lifted straight out of Fendt’s new Katana forager. That means there’s a pulse-operated hydrostatic joystick and a big screen for displaying all the essentials. There’s also a small cool box to keep your sarnies fresh and enough storage for the basics. 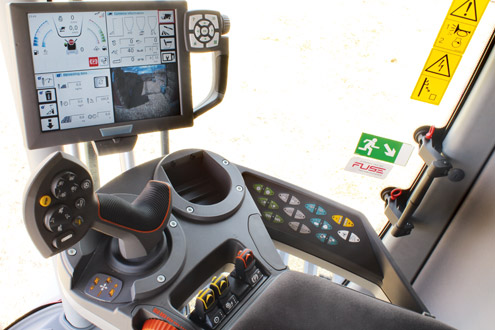 Starting at the business end, the Delta and Centora both now have the option of a new 10.74m cutterbar. This has a larger-diameter auger to help wind crop in faster and there’s a chain-driven belt on the table to keep it well fed. Auger adjustment has been made a bit easier, too, by adding hand-adjustable turnbuckles on the sides.

To cope with the extra width the maker has also beefed up the construction and added a double Schumacher knife drive.

Further back there have been some changes to the rethreshing unit on the returns auger. This has been fitted with a mini-concave that gives stubborn grains a thorough beating before dumping them back onto the shaker shoe. For more delicate crops it can be replaced with a smooth cover to prevent any damage.

Grain tanks have got bigger as well, with the largest machines getting a 12,500-litre capacity and the auto-levelling versions 10,500 litres.

Looks have also changed quite a bit. Curvy plastic panels have replaced the old metal ones and the half-grey paintwork has been ditched in favour of all-red. MF says the panels collect a lot less dust and chaff and are more resilient when it comes to battles with branches.

Another neat feature that comes as standard on all models is a system for keeping the combine full. It’s called Constant Flow and it controls the combine’s speed according to the amount of crop inside it. If the sensors realise there isn’t enough crop going in they will up the combine’s speed. Massey reckons switching it on can boost the combine’s output by as much as 15%.

The Delta 9380 is the highest-output combine in the lineup and replaces the 9280. It’s fitted with a hybrid rotary separator that has the usual drum and concave arrangement at the front and two rotors at the rear. Power is provided by a hefty 9.8-litre, seven-cylinder Agco/Sisu engine that can develop 496hp.

Massey has also launched a hillside version of its Beta combine. The 7360PLI has up to 20% side-to-side leveling, 30% front-to-back and four-wheel drive as standard.

If you want to see the new Delta and Centora combines in the flesh they’ll be having their official launch at the Agritechnica show in Hannover in November. Full production of the new combines is set to start in February 2014. Unfortunately, prices are not yet available. 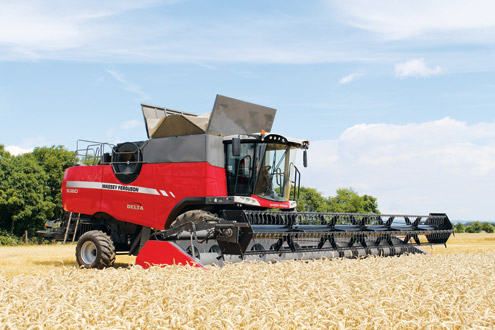 Agco bought Italian combine manufacturer Laverda in 2011 and since then has started producing all of its European combines there.

The Breganze factory in northern Italy now churns out about 1,200 combines a year – 380 in Massey Ferguson colours, 340 in Fendt green, 360 in Laverda livery and 120 Challengers.

Some countries can choose which colour they want, but in the UK the only combine brand from the Agco stable is Massey Ferguson.

Agco is planning to double the size of the Breganza factory and the number of combines it produces by 2018 to about 2,400.

Massey has been busy in the tractor department, too, building four-cylinder versions of its three-cylinder 5600-series tractors.

These are a bit lower-powered and simpler than the arable-oriented 6600 machines and are designed to appeal to livestock farmers and those who want to do a lot of loader work, says Campbell Scott, brand development manager. “The 5600 three-cylinder tractors are aimed at the livestock and loader tractor market and the 6600 series are mainly for the arable market,” he says.


“The 5600 four-cylinder fits neatly between the two and it will be the most popular tractor range out of the Beauvais factory.”

All three of the new models have a droopy-nosed bonnet to improve front visibility and they’ve been given a neater front suspension setup, too. This means there’s space for the loader and front linkage to be on at the same time.

Power is provided by a 4.4-litre Agco/Sisu engine that develops 110hp in the 5611, 120hp in the mid-range 5612 and 120hp in the range-topping 5613. But unlike the three-cylinder machines, Massey has had to resort to AdBlue and a diesel oxidation catalyst to keep exhaust gasses clean.

All three tractors have the option of a Dyna-4 or Dyna-6 semi-powershift box. Both can be operated using the usual T-shaped shifter, but there are options to have buttons on the loader joystick, too.

In fact, it’s possible to have forward and reverse shuttle, gear shifts and a declutch button on the loader joystick if you pick the right choices from the options list.

Another nice touch is a declutch switch on the brake pedal – this means you can inch up to objects you want to pick up with the loader without touching the clutch pedal. It’s annoying that it has to be switched on every time the engine is started, but apparently the safety police insisted.

The 5600 four-cylinder tractors will start replacing the current 5400-series tractors from January, but it will be several months before stock of the older machines runs out. No prices yet, unfortunately. 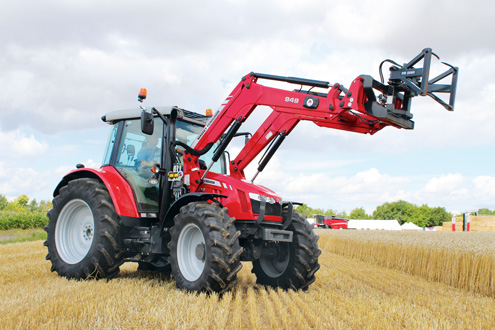 Massey Ferguson isn’t best known for its telehandlers, but it’s been selling them since 1996.

The latest machine on offer is the Bobcat-built 9000-series Xtra. This comes with a 3.6-litre Deutz engine instead of the old Perkins one and there’s an option of a 100hp or 120hp version.

The engine uses a cooled EGR system to beat emissions nasties. It’s fairly low maintenance, but MF has had to build a slightly bigger hood to accommodate it. 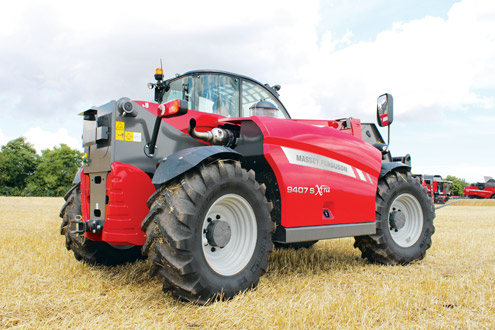 Not wanting to be left out, Massey Ferguson’s American arm has been busy bettering its balers.

The new Hesston 2200 range replaces the current 2100 and has had a series of tweaks to make it go better.

These include a straighter driveline, a pickup roller and new tapered chamber that improves bale density. It’s also been given an automatic oiling system to keep the network of chains in good fettle.

The chassis and axles have been strengthened to accommodate some chunky 620mm tyres and there have been some improvements to the bale ejector system.

The most popular models for the UK market is likely to be the 2270 and 2270XD (extra density). These have a 120x90cm chamber and the XD model comes with a large-diameter, 600kg fly wheel that packs the bale much tighter. 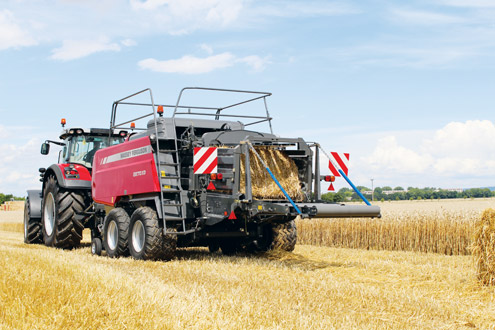