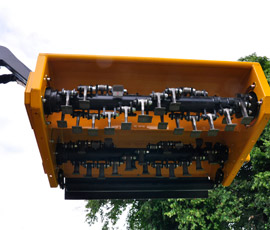 Shropshire company McConnel claims to have developed the world’s first mainstream, dual-rotor flailhead on a hedgecutter.

Called the TwinCut, it has two spiral rotors for tackling mature hedges in a single pass and the maker says it can give both a heavy-duty cut and a fine finish in one operation.

The first rotor has a heavy-duty T-flail which cuts in a downward direction, reducing the amount of debris thrown forward. The second rotor is set 50mm lower, cuts in an upward direction and uses a fine-cut flail.

The design of the TwinCut also removes the need for a hood cover, giving a smoother flow of materials into the flailhead and allowing operators to cut closer to obstacles and posts.

“This is the only mainstream dual-rotor flailhead in the world,” says McConnel general manager Christian Davies, “and it delivers benefits that takes hedge-cutting to a new level.”

The TwinCut flailhead comes in 1.2m and 1.5m working widths and can be fitted to non-telescopic arms from the company’s 70, 85, Mid-Mount and Classic models. The price has yet to be announced.