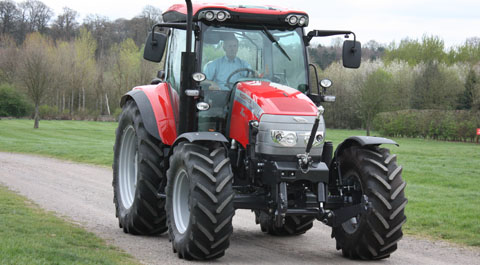 McCormick has announced prices and availability for its new X60 tractor range, which first appeared at the SIMA show in Paris in February.

The X60 is an important model for the company, replacing the long-running and popular CX, which first appeared as a Case IH machine in 1997 before McCormick took over production.

Fellow Argo brand, Landini, has added a 110hp model to the top of its 5-H series tractors, called the 5-115H. It has 4,350kg lift capacity and a choice of synchro and power shuttles.

The new X60 consists of four models that run from 92hp to 121hp (with boost) which replace the three CX models that went from 83 to 101hp. All engines are Perkins four-cylinder, four-litre units and there’s 9hp power boost on the top model for the first time. Prices range from £40,282-46,555 and the tractors go on sale in July.

The transmission gets an extra powershift step, taking total speeds to 36 or 48 with the creeper box. There’s a new dial on the dash, too, which alters the sharpness and softness with which the shuttle goes into forward or reverse. It has the same useful effect on clutch control too.

Other changes that bring the tractors fully up to date include a lift capacity boost to 5t, a move to lower link sensing and a new front axle that gives tighter turning. There’s also pto buttons on the rear mudguards and an economy 750 pto speed has been added to the existing 540 and 1000rpm settings.

Anti-bounce ride control is now fitted, too, plus a standard-fit electronic joystick and the ability to alter the flow through the first spool valve. The fuel tank has been expanded from 155 litres to 189.

There’s also more information on the new range of compact tractors that have been added to the McCormick and Landini ranges.

These are made by South Korean firm Daedong, and start at just 22hp. For mainstream farming, the Perkins-powered 74hp and 91hp models are likely to be of most interest, particularly as yard tractors. They have 2,400kg lift, 83 litres/min oil flow and 12 x 12 and 16 x 16 gearboxes respectively.