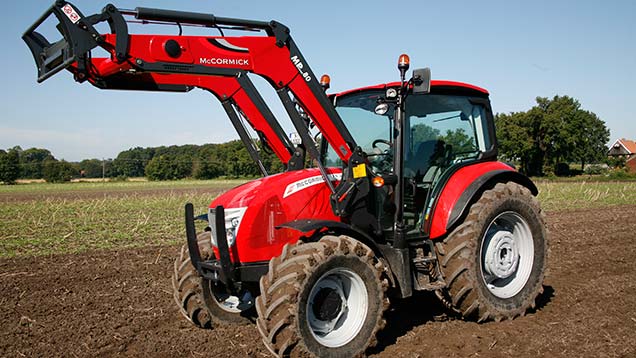 The X5.30 was so new at the time we carried out the tractor test that McCormick had to field a pre-production model, which was a bit rough around the edges. Full production models will no doubt be finished to a much higher standard, but they will still have the light-grey interior, which is somewhat sensitive to filth.

On the plus side it makes the cab feel bright and uncluttered – a stark contrast to the coal-black internals of the Case.

The four-pillar design gives good visibility around the tractor and most of the controls are well placed. One oversight is the low arch at the back of the cab, which loftier operators will keep hitting their heads on. The door is also massive and opens wide, which isn’t ideal for hopping in and out in tight sheds.

Providing it wasn’t working too hard, it was also the lowest fuel burner. But when pushed hard it fell a bit short of the New Holland.

Our test X5.30 came with McCormick’s own powershift transmission. This has a three-speed range box coupled to a four-speed main gearbox with three powershift splits.

That gives 36 forward speeds and 12 in reverse where the powershifts are disabled. Labelling is odd, though, with a tortoise, human and hare used to illustrate the three ranges on offer. The electro-hydraulic forward/reverse shuttle was smooth to use, but it didn’t feel the most robust.

Ergonomically, we had a couple of grumbles. Firstly, the main gear lever is a bit of a stretch, particularly when slotting it into third. This has the knock-on effect of making the gearshift-mounted powershift controls uncomfortable to use. Also, like the Deere, there are no automatic shifting options for the powershifts.

However, in the field it had an impressive overlap of gearing. At 1,800rpm there were a whopping 14 gears to choose from when working between 4kph and 12kph.

There’s no transmission brake, which wouldn’t normally be a problem. But because you can’t use the handbrake when the passenger seat is down without taking the skin off your knuckles, we found it a touch tiresome.

Four-wheel drive and diff-lock were catered for with simple buttons, and like a number of the other tractors in the test there’s no automation.

Despite having a shorter-than-average wheelbase, the McCormick had the worst turning circle of 10.8m – a full 2m further than the Kubota. Its biggest tyre option is also just 34in.

With the decibel meter in the cab it generally scored better than the test average, but we found the engine note a bit irritating when working at higher revs.

The little McCormick was just about bang on the group average for rear-lifting prowess. Average lifting power was 4.7t, but it managed to hoist up 5.1t with the link arms in their highest position.

Lift controls were fairly good with a simple dial for depth control and a rocker switch for quick lift and drop. Not so good is the fact the rocker is the wrong way around, meaning you have to click it up to drop and vice versa.

The X5.30 was well specced on the pto front, with the option of 540, 540E and 1,000 speeds. On the spool front, our tractor came with two valves and there was space for a third. These are handy to grab and easy to lock, but the max hydraulic flow of just 66 litres/min was a bit steady compared with the group average of 76 litres/min.

The McCormick’s loader was a decent load lugger that recorded an average lift power of just over 1.8t. The cable-operated joystick was better integrated than in the likes of the Valtra and fell easily to hand.

The McCormick’s Perkins/FPT engine turned out to be one of the best on test, giving plenty of power without using too much juice. Hydraulic performance was less than impressive, though, as was the turning circle.