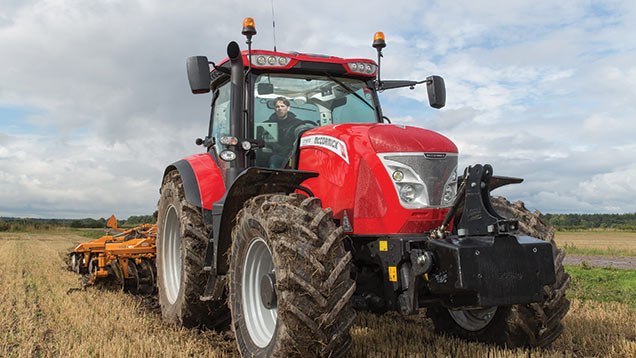 McCormick has launched its first ever CVT (continuously variable transmission) tractor, which it hopes will mark the beginning of a new era for the brand.

The company has forged its name on unpretentious semi-powershift tractors, but the market for their simple machines is shrinking. European farmers are starting to demand more comfort and complexity than McCormick has traditionally offered, and not producing anything with a stepless ‘box has effectively eliminated the company from one of the quickest growing sectors.

So, as part of its response to a dwindling 2% market share, there has been a serious shake-up across McCormick’s higher horsepower divisions.

The MTX, XTX and TTX, with Case IH heritage coursing through their cherry-red tinwork, have been banished to the history books.

Into their shoes has slipped a new family of X6 and X7 machines. Initially the latter came with a 24-speed powershift gearbox that still represented a big step up in class for the Italians.

Then, this summer, the CVT versions arrived and there’s also an X8 on the horizon that is due to be unveiled at Agritechnica in November and will take power outputs beyond the 300hp mark.

The company accepts that traditional McCormick buyers might not be in a hurry to have a CVT, but if market share is going to grow then it means stealing sales from its rivals.

The challenge will be for McCormick’s dealer network to entice a new type of buyer that might traditionally have headed straight for the John Deere or Fendt showrooms.

Competitive prices are bound to catch their eyes, but convincing them to part with a wad of cash for an unfashionable brand with an unknown sell-on value is a different story.

The Italians use a transmission built by ZF that you’ll also find in Deutz-Fahr’s stepless TTV tractors. While the likes of Fendt and MF use two selectable ranges, ZF’s has four auto-shifting mechanical ranges.

It is far smoother than other four-step CVTs, such as Valtra’s. Shifts through the ranges are practically imperceptible except for the whine of the hydrostatic element as it drifts in and out of action.

Unlike its rivals, the McCormick drives at 0.5kph as soon as a direction is selected, rather than waiting for a prompt from the foot pedal. This just means you’ll need to use your left boot on the brakes more often than other tractors on the market.

McCormick’s transmission software allows you to create virtual ranges in a similar way to Case IH or Claas tractors.

There are three maximum speed limits that, for simplicity, we’ll call V1, V2 and V3. There’s a fourth – V4 – that can’t be adjusted and is set to range from 0-50kph. The narrower the speed band, the finer the speed adjustment, so acceleration in V4 is too swift for some jobs. Unfortunately, there’s no scroll wheel to adjust these quickly – you’ll have to head into the screen.

As well as the four speed limiters, there are two cruise modes available in each direction. The idiot-proof system has just one button to memorise a speed, as well as to engage and disengage it. Cruise speeds can also be tweaked by buttons on the handstick if you need to fine-tune things.

The shuttle had to be redesigned to accommodate an extra forward/reverse selector on the handstick, though the basics remain the same. Sadly, there’s still no park lock position.

Where’s the power coming from?

The junior-sized McCormicks might have made the switch to Deutz powerplants, but the big guns are sticking with Fiat blocks for now.

There are five models in the VT Drive range – three with four-bore engines and two six-potters.

We were in the 180hp flagship that comes with a boost that adds an extra 14 ponies and takes bottom-line horsepower closer to 194hp for pto and transport work.

In-cab engine controls are basic. There’s just one engine rev memory on an armrest button and a split throttle arrangement that sets minimum and maximum speeds between which the engine will work.

There is also a manual mode that allows the driver to set the engine revs separate to forward speed for pto jobs that require a constant speed at the shaft. It might also be handy for loader work where a few revs encourage a peppier hydraulic performance. It’s engaged as soon as the hand throttle is moved forwards.

Is the cab new?

The cab, and in fact the rest of the tractor, is pretty much identical to the VT’s powershift equivalent.

The four-poster is bright, airy and very quiet during work, though visibility is slightly hindered by the high fenders and low roofline.

McCormick buys its in-cab switchgear from the same company as Deutz, so their cab interiors are spookily similar. Linkage controls are based on a Bosch system, which is just about as simple as it gets.

The big 12in screen is the focal point of the armrest and comes included in the VT’s price. It is well designed but there’s not a whole lot in there at the minute – McCormick intends to add extra functions over the coming months.

The company decided against using it to double up as the guidance screen, which we think is a shame. It means you’ll have to attach another monitor to your right-hand door, as well as the sprayer and drill boxes that will pretty much wallpaper the right-hand window. However, it is Isobus compatible, so if you’re running top-spec implements then you’ll be able to make the most of the screen.

Area and fuel monitors are only in the dash screen, though there is a software update on the way that will transfer this function into the big monitor.

The cab is comfortable, quiet and easy to navigate, and the internals are a reliable combination of smooth ZF gearbox and Fiat engine.

However, it’s worth bearing in mind that it is McCormick’s first foray into the world of CVTs so there may still be a few teething problems. Whether the Italians have managed to put to bed the odd electrical gremlin also remains to be seen.

The tractor might be worth a lot less than a Deere or Fendt when it comes to selling it on, but you can save a big lump on the initial ticket price and, provided you’ve got the dealer back-up, we reckon it could be worth a punt.