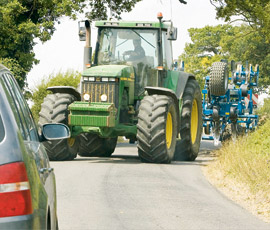 European proposals to introduce MOT-style testing for most tractors and light trailers have been opposed by MEPs.

However, in a vote in Brussels this week, MEPs said trailers weighing less than two tonnes should be exempted from testing.

And only tractors used “mainly” on public roads for haulage with a maximum speed of more than 40kph should be required to undergo testing, they added.

The NFU has been actively arguing against the EU’s Roadworthy Package, which was first published in July 2012.

It welcomed the amendments to the original proposal, but warned more must be done to ensure farmers did not face “unnecessary burdens”.

Ben Ellis, NFU regulatory affairs advisor, said: “We are pleased to see the European Parliament has made some good amendments to the original proposal, but more must be done before we are satisfied.

“This is certainly better than the commission’s proposals where all tractors with a design speed of greater than 40kph would have to undergo an annual MOT-style test and where livestock trailers, or indeed any trailer above 750kg, would have to undertake testing.”

He added that the NFU was committed to road safety, but despite the MEP changes, if the regulations were introduced they would be “onerous, costly and based on little hard evidence that tests would improve road safety”.

Before the road safety rules could become law, the European Parliament must agree on a joint position with transport ministers from all EU member states.

The NFU said it would continue to work closely with the Department for Transport (DFT), who have been very supportive of its position, to further improve the commission’s proposals.

John Allan, national chairman of the Federation of Small Businesses (FSB), said: “There is no evidence that introducing an MOT for light trailers and agricultural vehicles would improve road safety.

“Evidence shows that accidents involving large trailers are largely caused by inappropriate driving behaviour or how the trailer has been connected, neither of which a test could check.”