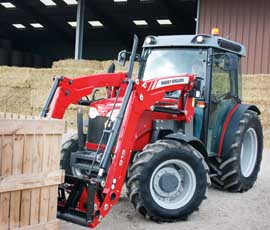 Drivers of high-hp tractors may get bigger cabs, plusher seats and a more mouthwatering set of buttons, switches and joysticks than those in smaller machines, but manufacturers are gradually improving life on the little ‘uns too.

In fact Massey Ferguson is the latest maker to bring a bit of luxury to the 80-100hp tractor bracket, with three new models in the 3600 range.

With the average tractor now mustering 140hp, there’s no doubt that the demand for smaller machines is declining. The figures from the Agricultural Engineers Association show that 3454 tractors in the 80-100hp were sold in 2005. That dropped sharply to 2000 sales in 2009, but then flattened out to give a still-substantial figure of 1864 sales in 2010.

However MF’s director of sales engineering Campbell Scott points out that the company sells some 2,000 models in this hp category across Europe. And while all-arable farmers may struggle to find a use for a tractor of this size, many mixed farms, as well as dairy enterprises, pig and poultry farms still find them very useful. And even large arable farms often have a need for an estate-management type runabout (often with a front loader) for smaller, non-fieldwork jobs.

As with the previous models, there are several variants. These cover the narrow-format orchard and vineyard markets across Europe, but also include regular-type tractor formats suitable for mainstream livestock and arable farms.

New 24 x 12 gearboxes are fitted, with a button-operated splitter on the gearlever giving two speeds in each gear. There’s also a powershuttle as standard, with a declutch button on the gearlever giving forward and reverse changes without having to push the clutch pedal. In fact driver can change a mechanical gear, stop and pull away without having to do anything with his left foot.

The MF3600 models also get a new cab interior, with a many of the controls and switches taken from bigger Massey Ferguson models. Lift capacity is a modest 2.5t and an aftermarket front linkage is available too. MF says the new models will be available shortly. 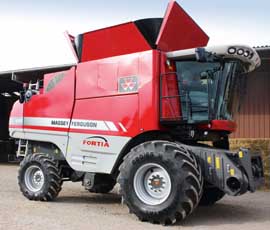 Though MF is holding off bringing it into the UK so it can concentrate on its relatively new 7280 hybrid combine, the new 398hp 9530 Fortia rotary machine (pictured) was chomping through a field of maize in front of journalists in eastern France.

In fact it’s largely aimed at those with high-yielding grain and straw crops in France and Germany as well as those in Eastern Europe.

It may look like a giant machine but its overall width on 800mm tyres keeps it within the critical 3.5m transport width that applies in many western European countries.

The 700mm diameter rotor is 3.65m long. That makes it the longest rotor out there, claims MF, and should give a good sample and low straw damage.

As grain tanks get bigger, it’s inevitably taking longer to empty them. So combine makers are vying with each other to see who can make the fastest-emptying discharge system. Massey uses two independent tank augers that feed directly into one main 7.4m long discharge auger, giving a discharge rate of 158 litres/sec. That means it should transfer a tankful from combine to trailer in just 67 seconds.

In the cab, there’s a nice new C2100 display with a 12in touchscreen screen. This shows the settings chosen, most of which set themselves automatically once you’ve chosen the drop type.