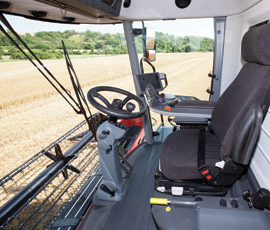 Massey Ferguson Beta five and six-walker combines now come equipped with a new Skyline cab. This is claimed to provide an environment and spec level normally only found on premium combines.

Noise-reducing glass is fitted, along with a new control arm console and Powergrip controller.

Pulsing the lever forwards or back speeds up or slows the combine, while reverse is selected with a press of a button on the back.

Four switches just below the lever operate things like the threshing mechanism and header engagement, four-wheel drive and a new electric parking brake.

The combines are also fitted with a new Techtouch terminal that gives full monitoring and control along with auto settings for multiple crops.

Operators can choose to make changes on the Techtouch terminal touch screen or via the navigator pad which has keys and a rotary input control. Electrically adjustable sieves, which are included in the auto crop settings along with the ability to monitor returns, are both shown on the Techtouch screen.

The screen is divided into four parts and operators can choose the elements to be displayed or flick through various screens. The general information screen is always on display and shows engine speed, ground speed and other machine and engine operating information.

Images from the standard rear-mounted camera can be displayed on the whole screen or reduced to appear in one of the four sections.

The new models retain the MCS rotary separator and are claimed to get low fuel consumption from the SCR-equipped engines. The optional ParaLevel system is said to give good efficiency when working on slopes up to 20 degrees, while keeping overall transport width to within 3.5m.

The Skyline cab will be standard for all 2013 season models in the MF Beta series combines, including the five-walker MF 7360 and the six-walker MF 7370.