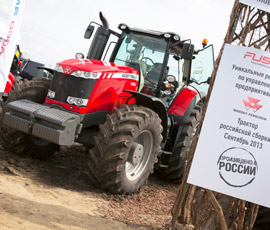 Massey Ferguson may be chiefly known for its high-tech tractors and combines these days, but the company is employing some simpler, older-tech kit in its push to boost sales in Eastern Europe.

The nine models in its latest MF400 series, made in MF’s Brazilian plant, use Tier 2 emissions engine technology. That’s somewhat older technology than the Tier 4i tractors that makers are obliged to sell in western Europe, but fully legal for countries like Russia and Ukraine where emissions regulations are somewhat less onerous. Ukraine, for example, is still happily operating at Tier 0.

Though the MF400 tractors are not available in the UK, they still have a lot in common with older MFs built in Coventry. The Ferguson hydraulics and 12-speed gearbox, for instance, would be familiar to anyone with an older Massey.

The key model for eastern Europe is expected to be the120hp MF470Xtra model, which is aimed at dairy and mixed farmers, as well as those running big fleets.

All the big tractor makers – including Deere, Case and New Holland – sell into eastern Europe. However there’s demand for both high-tech equipment for big farms and less sophisticated fare for smaller farmers. With the 2008-09 financial crisis, which knocked farm machinery sales in east Europe badly, receding from memory, there’s a more optimistic air in these eastern markets too.

Massey’s particular push, according to MF’s Campbell Scott, is into Russia, Ukraine, Kazakhstan and Mongolia. Some of these eastern markets are big – Russian farmers, for instance, buy 30,000 tractors every year.

However, a big chunk of the market is held by MTZ Belarus, whose basic tractors are the traditional choice for farmers. MF hopes its 400 series tractors will grab some of that market.

“Farmers in these countries want a western-type product at a good price,” says Mr Scott. “We’re trying to make sure that customers can find a product that’s suitable for them.”

As well as selling a new range of tractors, the company is also to start marketing its 9000 Series handlers in eastern Europe for the first time. It will also be selling MF3600, MF5400, MF7600 and MF8600 models plus combines and balers.