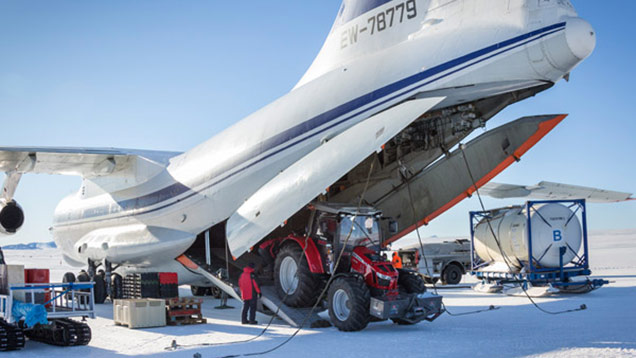 Massey Ferguson’s project to drive an MF5610 tractor to the South Pole in the footsteps of Sir Edmund Hillary’s 1958 Antarctic journey kicked off last weekend with the start of its 3,100 mile journey across the ice.

Transported in a IL76 heavy-cargo aircraft, the tractor landed at Novo Runway from Cape Town where it has been undergoing some final preparations for its polar adventure.

“It’s wonderful to see the first pictures of our MF 5610 tractor in Antarctica which will be its place of work for the next few weeks,” said Campbell Scott, Massey Ferguson’s director of sales engineering and brand development.

“The arrival of the MF 5610 at this time is highly appropriate as it coincides with the official birth of the Massey Ferguson brand name on 19th November 1957. The project will emulate the achievement of Sir Edmund Hillary, who reached the South Pole using three Ferguson tractors in 1958.

The plan this time is for one modern MF 5600 tractor and two Toyota pickups to reach the South Pole 56 years after Sir Edmund Hillary’s trek. The lead driver is Dutch explorer Manon Ossevoort, known as Tractor Girl.

In the original 1955-1958 Commonwealth Trans-Antarctic Expedition, a fleet of seven Ferguson TE-20s were used. Four had petrol engines and three were diesel models. Some were supplied as half-tracks with steerable front skis.

However, others were fitted with an extra wheel on each side and full tracks. In both cases the track kits were easily removable and in easier conditions the tractors were used on standard wheels and tyres.

A canvas cabin was added for windproofing. Other than this, the tractors were totally standard – two were even fitted with a standard farmyard hydraulic front-loader for loading and unloading supplies.