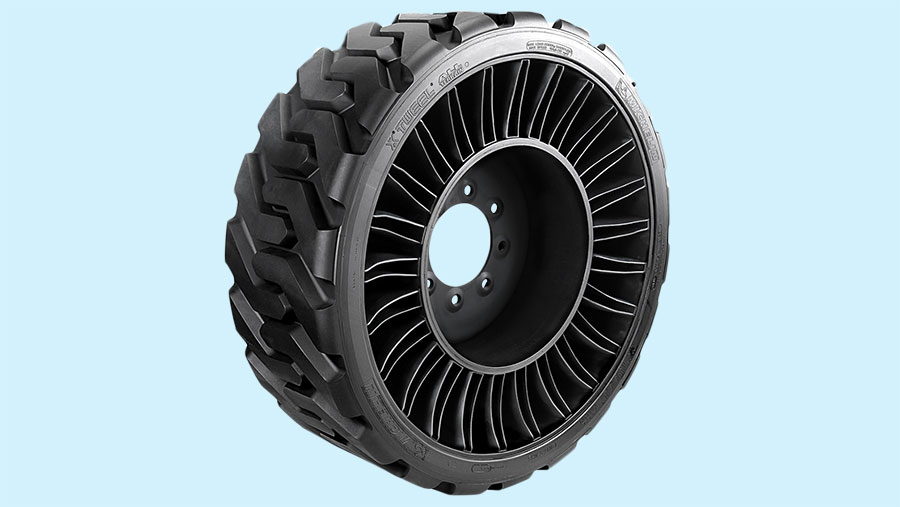 Tyre maker Michelin is bringing an airless tyre aimed at the skid-steer market to the UK, which has been in production at Michelin’s South Carolina plant since 2014.

Visually the tyre resembles a push-bike wheel, with a web of high-strength poly-resin spokes connecting the outer round to the central hub.

These spokes absorb any vibration and impacts from the ground, similar to an air-filled tyre but crucially, without the risk of a puncture, claims the firm.

There’s also a buried layer of undertread, which allows the tyre to be retreaded once the initial layer has been worn down.

The X Tweel will be available in two versions, the all-terrainwhich will have a wider tread pattern suited to off road and muddy conditions.

The Hard Surface tractionoption has a smoother tread, which leaves more rubber in contact with the ground, ideal for concrete or tarmac, claims the firm.

The tyre specialist reckons agricultural uses will range from scraping yards and clearing slurry to moving bedding and feeding animals.

It’s been used extensively across North America on skid-steer machines and livestock farmers on this side of the pond will most likely be the target market, with prices still to be announced.