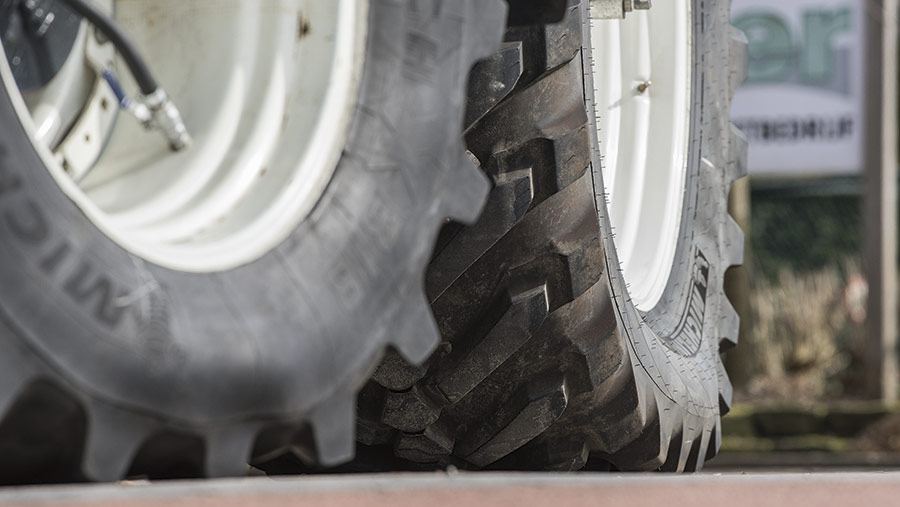 When buying a new set of tractor boots, the final choice is often dictated by whether the machine is going to spend more time in the field or on the road. However, Michelin now says it can offer the best of both worlds with its EvoBib tyre.

The EvoBib uses a clever rubber arrangement to provide maximum traction on the dirt while also being stable and fuel-efficient at high speeds.

The tyre has an internal ring of solid rubber that makes contact with the tarmac on the road, but a unique hinge arrangement allows it to change construction when run at lower pressures.

Road mode comes at about 2bar pressure where the outer lugs of the tyre become raised from surface contact, leaving the central band gripping the road.

The adapted tread pattern offers a smoother ride than a standard wheel and also helps trim fuel use by up to 5% because of the reduced rolling resistance, according to Michelin.

Setting the pressure between 0.6bar and 1.1bar changes the tyre’s profile. It becomes more soil friendly by spreading its weight across a larger surface area as the outer lugs drop to the ground.

Michelin says the internal band becomes elongated when at lower pressures, which causes the tyre’s surface area to grow by more than 20%, with the band transferring more traction to the soil.

Internal testing by Michelin suggests a 20-50% increase in traction can be achieved by using the EvoBib. That jump in the amount of power put to the ground could equate to an extra furrow on the plough or a bigger cultivator, which will have a positive effect on total output.

It remains to be seen how the tyres will hold up with prolonged use on different terrains, but the manufacturer is confident in achieving upwards of 6,000 hours from a single set of shoes.

Users in the Netherlands have reported other benefits from the tyres, including less disturbance when fertiliser spreading on grassland compared with conventional tyre tread.

They have also noted that adjusting the tyre pressure is a simple job that can be done in the field.