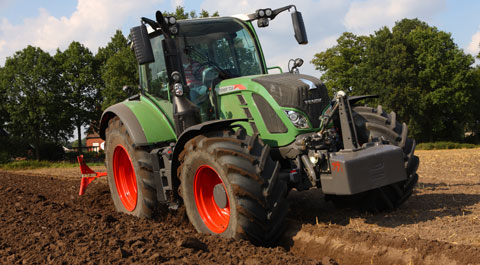 As usual, the Fendt delivered on working and driving comfort as well as performing well at the DLG testing station. This is reflected in its high price, though.

Access up to the 1.45m-high five-poster is good with a small and easy-to-shut door on the left-hand side. The cab is spacious (1.58m wide x 1.50m long) with plenty of practical shelves and cubbies.

The terminal has traditionally scored well in the tractor test – you can move it in every direction. Power outlets are also located next to the monitor rail and there are sealed holes to bring in the cables. Cab noise was just above average.

Operators get an almost unbeatable view of the front linkage from the driver’s perch. Views to the right are good, too, and the rear window is large and opens wide. The B post interrupts the view slightly to the left, but the plus side of that is the side-opening window for a blast of fresh air.

Our test machine was kitted out with the all-singing-all-dancing Profi Plus package. At 27cm it also had the biggest terminal of the tractors tested.

One feature we didn’t like was the option to ‘restore settings’ when firing up the tractor – selecting ‘yes’ may, for instance, put the pto setting on the joystick. This isn’t new, but we’d prefer the monitor to display which functions are activated before being able to restore the settings.

Small changes since the 939 include guidance and HMS buttons (all white) and there’s now a slightly out-of-reach park brake on the steering column.

The braking was precise (although the test team found the pedals quite small). Four turns take the wheel from lock-to-lock and you can reduce the turns of the wheel required at headlands through the GPS menu, and it returns to normal above 8kph. The turning circle of 12.4m was second best of the tractors on test.

The engine doesn’t have boost but, nevertheless, achieved the second highest pto output of 230hp. It also had the lowest fuel consumption figures with 223g/kWh.

The 6.05-litre Deutz engine also performed well in the six-point partial loading test, scoring 242g/kWh compared to the 257g/kWh group average. It also recorded the highest torque with 1039Nm, but had a marked thirst for AdBlue – about 6% of fuel use.

There are two recordable rev memories, labelled min and max on the joystick. These can only be set through the terminal – there’s no press-and-hold system like New Holland uses on the T7.

You can find the revs programme in the TMS menu, where you can also set min and max engine speeds for pto, transport, hydraulics and linkage lift.

Default driving mode is through the joystick, but you can also switch to the pedal by poking a button on the armrest. Pedal travel can be adjusted using a roller on the side of the joystick and there are four stages of gearbox severity, too.

There are two mechanical ranges – field and road. In TMS mode the gearbox and engine work together to make the engine and transmission as efficient as possible. During fieldwork you can set a trigger for the TMS to kick in.

Three cruise speeds are on offer. One can be set on the move by tilting the joystick when travelling at the chosen speed. The other two speeds – C1 and C2 – are controlled on the joystick.

Directional changes can either be made by tilting the joystick left (while holding the back trigger) or by flicking the column-mounted paddle. This has no neutral position, though – instead it is found by a button on the armrest. That’s a reach for the driver and the test team felt it could be dangerous.

As for engine programming – droop can be set manually from 0-30% and there is also an auto setting. However, this is just an average value of 10-15% rather than a figure that changes according to load.

Our 724 was fitted with 710/70R 38 tyres. It has good displays for both four-wheel drive and diff lock settings.

For each function there are two buttons – one for auto and one for manual mode – it’s about as simple as it gets. The auto mode is linked to the steering angle and speed, which is good.

At 7.7t the 724 treads pretty carefully. Payload is a Hulk-like 5.8t but the permissible rear axle load of just 8t might be under pressure with some heavy duty implements hooked onto the three-point linkage.

The Fendt recorded an adequate 8.5t lift capacity and 80cm of link arm travel. The lift rods have a 10cm quick adjustment feature, which is handy for coupling.

All linkage functions can be tweaked through the terminal and the tractor also gets a hydraulic top link. The Fendt’s external controls are badly arranged – the lift button is positioned above the drop one so down is up and up is down.

Up front the linkage has a 4.4t lift and one hydraulic outlet controlled by a spool valve.

In the cab the linkage controls are also a bit of a disappointment. The raise/lower buttons are difficult to see from the driver’s seat and it’s hard to find the stop button to prevent the linkage lifting. Depth control is by way of a roller/slider that moves from left to right – confusing for those used to conventional forwards/backwards-type rollers.

Fendt’s hydraulic set-up is one of the best around, with five spools on offer at the back and one at the front. All of them can be set and adjusted on the terminal.

Two spools can be controlled on the joystick, two on the stubby cross lever and four on fingertip paddles. Everything is programmable so you can control any spool on any paddle or button. The one downside to that is that the colours then don’t match up – maybe a colour-changing LED could be introduced in the future?

Conveniently, if you forget which spool is on which controller there is a ‘restore factory setting’ which returns everything back to normal.

At the test station the Fendt recorded the lowest hydraulic pump capacity (although there is a 152-litres/min option) and 64 litres of available oil.

There’s an auto mode, which is linked to the lift arm operation on the Go/End rocker. The switching points can be adjusted and the engine rpm can be pre-programmed for when the pto is operating. The pto can also be fired up on the external controls (either side).

There is a setting function for the stop/go height for the pto, but you can only do this using the small dashboard screen. We’d prefer to see it on the terminal.