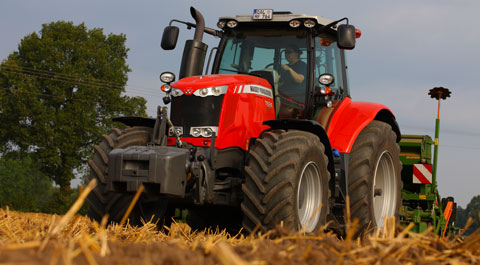 The French-built Massey has plenty of features and a new joystick. It performed averagely at the test station and its unreliable terminal can be hard to work with.

The driver sits between the B-pillars, which hinders the view sidewards. Visibility forwards was one of the best on test and rearwards is helped by the lower window, which is handy for coupling. Its 73.6dBa cab noise was distinctly average.

The passenger seat is small and uncomfortable and storage space is in short supply. There’s a mounting rail for monitors but no power outlets nearby.

The Dyna-VT’s joystick is well-sized, but some of the drivers felt that the nobble housing the HMS and forward/reverse buttons made holding it uncomfortable.

Controls for pto, an engine speed memory, linkage, SV1 and SV2 controllers, one spool with float, shuttle and HMS are all well-labelled on the stick. The joystick shuttle is controlled by a single button and the neutral button is on the back.

The tractor was fitted with the 17.5cm Datatronic screen which was not working properly. We dislike the fact that even if you pay for the Datatronic set-up several settings are only adjustable through the mini dashboard display.

The MF has a good turning radius of 12.7m and four-and-a-quarter turns take it lock-to-lock. The speed steer function halves the number of turns of the wheel to lock on headlands and is handy when plumbed into the HMS. The road team scored the cab suspension highly and driving comfort was mostly good.

There are three cab suspension options: rubber blocks, mechanical springs or hydro-pneumatic. The pneumatic suspension can be adjusted but it’s difficult to notice any differences.

The road team did complain that there is a delay before the brakes engage and that the indicators didn’t always work, but on the whole it was comfortable.

The six cylinder, 7.4-litre engine is made by Agco Power. Like the Fendt, there’s no boost mode and max power at the pto is 222hp. Consumption is 232g/kWh – around the test average – and AdBlue consumption is 6% of this. It did, however, performed worst for consumption in the pulling test.

In the cab there’s a stiff plastic hand throttle, with engine rpm displayed on both the dashboard screen and the terminal. You can record two engine rpm settings on the terminal – A and B. ‘A’ is activated on the joystick and it can be programmed – just press-and-hold the ‘A’ button when you’re at the desired engine rpm. B is reserved for HMS and cruise control.

Massey’s DynaVT-badged transmission is identical to the Fendt’s ML180, but gets MF’s software in the cab. Like the Fendt there are two ranges (field and road), which you can switch between using the hare button on the armrest.

Once the range is selected you can pick the mode – manual or DTM. The default mode is manual, where the foot pedal controls revs and the joystick takes care of speed.

When you’re in manual and select pedal mode, the foot pedal sets the speed, the SV1 roller on the side console sets the engine rpm and SV2 can be used to set a cruise speed.

DTM mode is similar to the Fendt’s TMS – the drivestick or pedal sets the travel speed and the tractor manages engine rpm itself. When you are in DTM pedal mode with an engine speed memorised you have forager mode – just nudge the pedal to adjust travel speed.

Maximum draft power was measured as 180hp and the Massey was the thirstiest when on cultivation duty, using 40.7-litres/hour.

The shuttle lever is a classic MF affair. It allows operators to change direction and control the gearbox but doesn’t have a park position. If you fancy shuttling with the joystick then the lever must be left in the neutral position. Forward and reverse ratios can be set on the squint-inducing dashboard screen.

There are two buttons each for four-wheel drive and diff lock on the B-post panel. One controls the auto function and one is to engage it permanently. In automatic mode it engages and disengages according to steering angle and rear linkage lift.

The 7624 gets with long link arms and stabilisers that can be locked open with one movement – a better bet than Deere’s hole-and-pin set-up.

However, the Massey’s 7.5t rear arm lift capacity was the lowest on test and 900kg less than the average. It also had just 770mm travel and, while it came with a hydraulic top link, there is no way of controlling it externally.

In the cab, link arms are controlled on the joystick. The neutral position stops the arm movement, which the test team scored highly for security and ease of coupling. The same three buttons are also on the armrest and the actual position of the arms is indicated on the terminal by a red line.

In the hydraulic department the MF has two outlets at the front and four around the back. Irritatingly, they are not clearly numbered on the outside or colour coded in the cab, so it’s pretty easy to plumb the wrong pipes into the wrong valves. There’s a mechanical lever on each valve block to speed up de-coupling.

Oil flow is slightly above average at 155-litres/min, and there’s 52-litres of reserve oil.

Spool controls are fairly well scattered and, while you can change the position of three spools on the terminal, it’s not as flexible as the Fendt set-up. There’s also the option of an integrated joystick, which are test tractor didn’t have.

Oil flow can be adjusted in both directions in 25% steps, while time can only be changed in one direction. Each spool is can be locked in float and all spools can be locked together, but there’s no option to lock each valve individually.

Speed selection is by way of blister buttons and two rocker switches engage either front or rear pto. The rockers are touch-tight though, so it’s pretty easy to press the wrong one.

The team loved the pto button on the joystick. There’s also a small button for auto, although it’s not possible to adjust the factory set switch points of the pto according to the lift arm position.