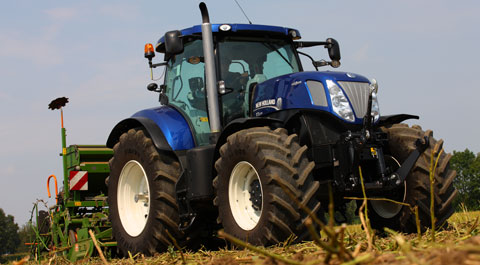 The T7 finished second overall and its engine and transmission performed well at the DLG tests. The only minor disappointments were the cab and monitor.

At 1.57m x 1.48m it was one of the smallest cabs on test and tall members of the team complained that they could not move the leather-type seat far enough back to be comfortable. Storage options are limited and the cab isn’t short of is grey plastics that have a habit of collecting dust.

Visibility is generally good (particularly rearwards), although the taller drivers also grumbled about the low roofline. The bonnet is enormous which makes the front link arms difficult to see. Bringing in external controllers isn’t particularly convenient either, with only a couple of power outlets on the B posts.

The climate control is noisy and at 75dBa the T7’s cab was the noisiest of the test tractors.

An electrically adjustable armrest is home to the AutoCommand joystick. This controls cruise speeds, shuttling, auto guidance and linkage controls, as well as two spools and the HMS function. All buttons are well-labelled but can be hard to press. The remaining blister buttons are grouped on the sidewinder console.

The touchscreen-only Intelliview III monitor is 17.5cm in diameter and is semi-customisable. New for this year, it also has pop-ups for certain settings including pto, engine speed and linkage, which saves you hunting around in the terminal menus.

Since the test New Holland has announced a cab update which has seen climate control move to the roof lining, a bigger Intelliview 4 screen and backlighting on the joystick.

An ABS braking system is optional, but the road team reported good braking anyway, and the team liked that the electric parking brake is applied quickly when the tractor is stood still.

One thing the team didn’t like was the lack of a clear park brake position on the shuttle (it is there, but there’s no label to indicate that fact).

A 6.7-litre FTP motor provides a maximum power of 245hp at the pto. It also delivers the lowest specific fuel consumption on test – 219g/kWh (plus 19g/kWh AdBlue) – while max power without boost is 227hp and comes at 1,800rpm.

In the cab, the test team liked the precise feel of the hand throttle. There are two engine speed memories on the armrest that are programmed by a press-and-hold function once you’re at the desired engine rpm. These can then be fine-tuned with the plus and minus buttons.

The memorised speeds are engaged by a touch of the button (holding for too long resets the memory). If headland management is not active then one speed can also be set on the HMS button on the joystick. You can select engine speed on the terminal, too.

Autocommand, CNH’s name for New Holland’s CVT box, performed best in the DLG tests, achieving 196hp in the draft test. That was done with only 253g/kWh and 24g/kWh AdBlue – 6% lower than the test average.

The good results continued in the 160hp cultivator test, where fuel use (including AdBlue) totalled 37-litres/hour – the lowest value on test.

A major plus point with this ‘box is the ease of switching between pedal and joystick mode. There are three driving modes: auto, pto mode (automatically engaged when the pto is fired up), and manual.

Three pre-programmed speeds are displayed on the terminal. Switching between these can be done using the plus and minus buttons on the joystick and the speeds can be adjusted using the joystick roller.

The column-mounted shuttle returns to centre once the direction has been selected. A small button on the end of the stick finds the neutral position – a design that the test team did not score highly. Directional changes can also be managed by buttons on the joystick or by pushing the joystick twice in the same direction.

Droop adjustment is the biggest negative of New Holland’s transmission controls. It is done by a small, unmarked dial behind the pto button. No values appear on the monitor and it’s not even clear which way to turn it for eco and which for power.

Four-wheel drive and diff-lock have two buttons each on the armrest – permanent and auto. Auto 4wd is linked to the angle and speed of the wheels (it’s off above 20kph and on below 18kph). Diff lock turns off with the brakes, over 15kph, steering angle and linkage.

The T7 has a below average 4.1t payload.

The T7’s 9.3t lift capacity was second best and it also recorded above average link arm travel of 800mm.

The main in-cab linkage control is through the joystick and the raise/lower of the link arms can be stopped immediately by lifting your finger off the control button.

All the settings (including drop speeds and lift rates) are adjustable by analogue dials, some of which are buried beneath the under-arm flap. Draft control is also on a roller and can be confusing for first-time operators.

The armrest houses three dials to control max height, drop speed and linkage sensitivity. Here there are also buttons to slow down the speed of link arm movements, which is handy for coupling.

One downside is that, although you can memorise linkage settings on the terminal, you cannot apply the settings this way – it’s purely a memory function.

Our test tractor had the standard 148-litres/min load sensing hydraulics (170litres/min is optional), but its 40-litres/min of removable oil was the smallest on test and 12litres/min below the average.

There are four spools (although one outlet is used for the front linkage) and optional Power Beyond. Flow and time can be set in both directions on the Intelliview screen and on the dashboard (the terminal is an option) and all the valves can be locked individually, too. Float position is in the usual maximum forward position on the paddles.

Colour coding on the spool blocks matches the colours on the four fingertip paddles. Two spools can also be controlled on the joystick and another two on the cross lever, but there are few options for switching these.

There’s an easy-to-use dial on the right-hand console to change speed and the label around the dial shows the rpm required for each speed.

Pto engagement is via a push-pull button. We found the clutch particularly smooth and the pto is easy to stop in an emergency.

The automatic function is on a blister button on the side console. Every time the pto is engaged/disengaged there is a bleep in the cab – handy for letting you know what is going on but it can get annoying.

New Holland offers the easiest system for setting the height of the arms for the auto function – a small pop up screen on the terminal, set as a percentage.