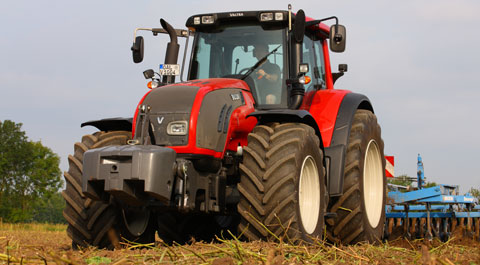 The Valtra was the least powerful of the test group. It performed averagely in the DLG tests, although the usability of its gearbox was its biggest downfall

The square, six-post cab is brim-full of dust-catching plastics. It’s the lowest cabin on test, with four steps up to the 1.38m high platform.

The inside has remained pretty much unchanged for the last 10 years and is due a facelift. At 1.40×1.64m the cabin is pokey and pretty Spartan – a luckless passenger must sit on a plastic board without a seatbelt.

Storage is limited and, although there’s space behind the seat, the floor is sloped so you’d probably end up flattening your cheese and pickle sandwiches with your clutch foot.

It’s not all bad news though – at just under 72dBa the Valtra was quietest in the cab. Work lighting is OK (xenons are optional) but the low seating position does visibility no favours. External monitors can be latched on to two steel handles, however, power outlets are few and far between.

In-cab ergonomics are not the Valtra’s forte. Functions and buttons are scattered across the cab and important controls like range changes are well disguised. Labelling, too, is confusing for people new to the Finnish tractors – the engine rpm memory and cruise speed memory share the same symbols and are both named cruise.

The small 11cm terminal is now colour screen but there’s still no touchscreen function. One major improvement is the new U-pilot system that allows the operator to edit and fine-tune HMS settings.

The small, go-kart style steering wheel was very precise and only needed three-and-a-third turns lock-to-lock. Despite that, the Valtra has the biggest turning diameter of 14m.

The steering could have been more precise, but the test team liked the self-cancelling indicators. The T-series was the only tractor on test fitted with pneumatic front axle suspension, which, combined with the pneumatic cab suspension, made for a comfortable ride on the road.

The Valtra is fitted with the same 7.4-litre Agco Power block as the MF, however, it gets a boost that is available for pto work and transport over 6kph. Max power with boost is 195hp and without boost it’s 183hp.

There are two engine rpm memories, recorded by pressing and holding either M1 or M2. Plus and minus buttons nearby can be used to fine-tune the speed.

The Valtra-made ‘Direct’ CVT is a close relative of the Versu semi-powershift ‘box and has three driving strategies – auto, semi-auto and manual.

Despite being badged as a CVT the gearbox has four ranges. Changing between A, B, C and D is done via armrest-mounted buttons. An LCD screen on the A-post shows you the current range selected.

At first glance C and D seem like the most obvious ranges to select for most jobs. But not so fast… Valtra says that because of the gearbox design two points on the power curve are completely mechanical and the middle point of each range is actually the least efficient.

That means that the obvious range isn’t always the most efficient – when driving at 3.2kph (the middle of A-range) it would actually be more efficient to operate in B. To get the best from the transmission Valtra says the tractor speed should be set at either 25% or 75% of maximum range speed (where the power is transmitted close to 100% mechanically).

The test team felt this was far too complicated and, at the very least, requires a chart in the tractor to indicate which range to work in at differing speeds.

Target speed can be set on an orange lever hidden under the armrest. Stomping on the pedal will then take you up to speed and you can adjust it on the move – simple stuff.

There are loads of programmable functions on the terminal. You can tick a box to make the switch from range C to D automatic, set max speed and clutch pedal engagement position on the terminal, but the labelling lets Valtra down. It is also possible to record three transmission settings, which can be set for the field or the road, for instance.

Software problems meant that the Valtra did not benefit from its boost at the DLG test station. It recorded 161hp draft power without boost. The unboosted max power was 183hp and with boost was 195hp.

The Valtra was slightly thirstier than the test average, recording a specific consumption of 281g/kWh (plus 16g/kWh AdBlue), it also drank 40.5-litres/hour on the cultivator.

The 4wd switch is a standard rocker with three positions – off, auto and permanent. Diff lock is also a three-stage rocker – in auto mode the differential is locked when there is a big difference between front and rear axle speed.

Like the cab, the Valtra carries some pretty old-fashioned hardware. Stablilisers use a traditional hole-and-pin design and the top link didn’t fit into its holder.

The link arms were so long that we had to use an extended pto for combination drill work. Despite that, lift capacity of 8.9t was above average and the long link arms helped record the longest travel of the test – 85cm.

Linkage control is via a three-way rocker in the cab. There’s a button for float and the plough team scored the depth control dial highly for precision and ease of use. There are also two buttons for easy coupling – these raise and lower the link arms beyond the max/min position, so watch out for that rear window…

The T-series gets five spools (four regular outlets and one for small flows), but no hydraulic top link. Flow is 163-litres/min and 47-litres/min can be removed – one of the best results on test.

The valves are lined up from top to bottom at the back of the tractor, either side of the top link. This makes coupling-up from one side awkward.

Inside the cab there is an armrest-mounted cross lever and two paddles. Hydraulic lock is via a blister button on the side of the terminal, which lights up when locked.

Like the gearbox, there are three settings – M1, M2 and M3 – which can be used to store settings and set-up hydraulic functions within the HMS. The right-hand dial can also be used to set the hydraulic flow without having to explore the main terminal. Steps for adjustment are 10%, 50% and 100%.

Only two pto speeds are on offer – 540eco at 1,550rpm and 1,000 at 2,000rpm. There’s a stiff mechanical lever to switch speeds and an awkward pto switch on the side of the armrest with a safety lock function.

There’s also a non-adjustable auto button on the side console, but this only disengages the drive – Valtra says that, for safety reasons, engagement must always be manual.