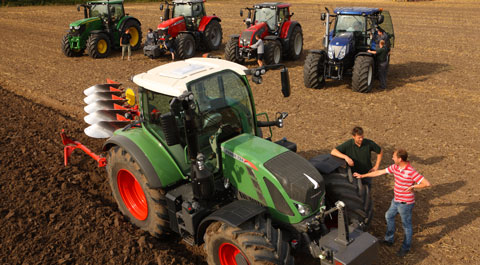 Today’s high-horsepower tractors are expected to be more versatile and comfortable than ever before. We spent a week testing five of the most popular in the field and on the road to find out which is best.

This year’s multitest involved one of the fastest-growing tractor sectors – six-pot powerhouses from 200-220hp.

Our five top-selling candidates are billed as the ultimate all-rounders – built for high-speed road transport, hardcore fieldwork and everything in between.

We invited each tractor company to send its top-spec 220hp model to a farm in Laer, Germany, where, with our European partner magazines, we spent a week field-testing them. They were then packed off to the DLG testing station in Frankfurt for a more detailed examination.

The five European-built tractors on test were:

Each test team had a designated implement and spent time testing each tractor in turn. The practical tasks included:

For the second part of test the tractors were sent to the DLG for tests. The measurements are taken against a selection of parameters from the OECD international standard test and now include measurements for AdBlue consumption and exhaust emissions.

Fit and finish were two of the most important aspects when it came to scoring the cab. John Deere and Fendt shared the top scores in this department.

Despite having a steep climb into the highest platform on test, Deere’s cab is tardis-like and the Command Centre is one of the easiest-to-use screens on the market. In comparison, Fendt’s was by no means the biggest but scored highly for visibility and practicality – the roof-mounted monitor rail was particularly handy for reducing cab clutter.

At the other end of the scale was Valtra – its small, old-school cab is due a freshen-up and control labelling was a bit of a muddle.

However, it top-scored (alongside the Deere) in cab quietness, an important consideration when it comes to picking a long-hours-in-the-seat tillage tractor. Noisiest was New Holland.

Pto losses are pretty low, so the engine output can be determined by measuring the output at the shaft.

When it comes to engine efficiency the outstanding candidate came from the UK. The T7’s FTP six-pot boots out up to 245hp at the pto with boost and achieved the lowest specific fuel consumption on test – 219g/kWh (plus 19g/kWh).

The consumption difference between Deere and the AdBlue tractors rarely exceeded 5% according to our pto measurements. Deere’s particulate filter regeneration is sometimes mentioned as a disadvantage but we found it only increased consumption by 0.3-0.4%.

New Holland also scored highest for its transmission which, in the draft test, used 6% less fuel that the test average. It also used the least (37-litres/hour) fuel when on cultivating duties and was one of the easiest tractors to drive.

Valtra laid claim to the most confusing transmission set-up – its four-range CVT gave the test team plenty of headaches. It’s potentially very efficient but is too complicated for the everyday driver to get the best from.

Deere’s Direct Drive was also included in the test. It was noted for its simplicity and drives like a super-smooth auto powershift, but has fewer functions than an out-and-out CVT.

Average rear lift was 8,417kg, but it was the Deere with just 7,879kg that scored highest. The Green Giant’s linkage raise/lower system was one of the easiest to operate and the depth control wheel was handy for ploughing.

The biggest lifter was New Holland with its 9,289kg lift capacity. However, it also had the smallest available oil reserve (40-litres).

The Fendt’s linkage controls were the biggest disappointment. The ‘stop’ button is hard to see from the driver’s seat (we almost crunched the back window because we couldn’t stop raising a Claydon drill) and the raise/lower buttons can prove elusive, too.

Fendt made up for its poor linkage controls with the best score for hydraulics. Five spools are on offer at the back and one on the nose, and they can all be moved between the joystick, cross lever and fingertip paddles.

At 112-litres/min, hydraulic pump capacity was well below the 150-litres/min test average. Deere had the biggest – 171-litres min.

The other test tractors had three-speed set-ups, except for Valtra which had only two.

Automatic functions were the most important factor in this sector. Most manufacturers had at least one form of automation and most disengaged once a set speed or wheel angle had been passed.

Average weight was 8,317kg – at 8,858 the New Holland was the podgiest, while the light-treading Fendt weighed just 7,685. The Fendt was also the tightest turner on test, swivelling 180deg in just over 12m.

All the test tractors were kitted out with pneumatic suspension. That meant smooth riding on the German road route, which took in towns, back roads and dual carriageways.

The CVT driveline of the New Holland surprised everyone by using the least fuel on the road route, even beating Deere’s mechanical Direct Drive.