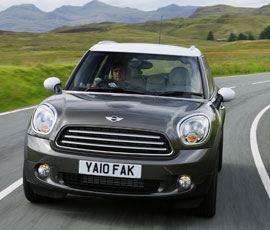 MINI has forged a reputation for nippy city cars over the years, but how would its first stab at a 4wd version fare? Oliver Mark took it for a spin.

If you love MINIS but cannot fit yourself, your golf clubs, your dog or your kids into one, fear not.

MINI’s first attempt at a vaguely practical car – a four-door, 4wd version of its old favourite – is here and it has certainly split opinion.

Why? Well, like a chicken-eating vegetarian, badging a fully urbanised MINI to be king of the countryside doesn’t sound quite right.

After three weeks of umming and ahing I’ve decided that, yes, the tallest, widest and longest MINI ever made is as good looking as the tiddlers. But since those weeks of deliberation I’m still yet to conclude whether it’s a big little car or a little big one.

Clamber inside and you’ll find the usual selection of quirky half-moon door handles, jumbo-jet style toggle switches and some initially unfathomable dials. They are gimmicks, but that’s what sells MINIS.

There’s ample space for two in the back and a false boot floor opens to form a double-depth 350-litre boot.

Buyers get the choice of a petrol or diesel 1.6-litre four-cylinder and six-speed manual transmission.

But, despite its slightly raised ride height and four-wheel drive, this city slicker does not take kindly to more unforgiving terrain. Like wearing cream loafers around the workshop (I don’t own a pair, honest), taking the Countryman off-piste is not recommended. A look at the Mini manual explains all – “do not take this car over rough terrain”. In reality it’s designed for nothing more than getting in and out of country-show car parks.

Fortunately it’s a little more competent on the road. Driving it is fun, but, given that it’s a Mini, you still have to sacrifice a bit of driver comfort.

For a 4wd the suspension is hard and you have to snatch at the gearstick to get from cog to cog. The steering is spookily responsive, too.

Despite the ride, the size and the price, I’ve developed a slightly embarrassing soft spot for the Countryman.

It’s fun to drive, and makes a refreshing change from all the lookalike soft-roaders on the market. Not a car for those who spend time off-road, but it’s ideal for ferrying the kids to school.

A word of warning, though – steer clear of the wallet-draining options list.