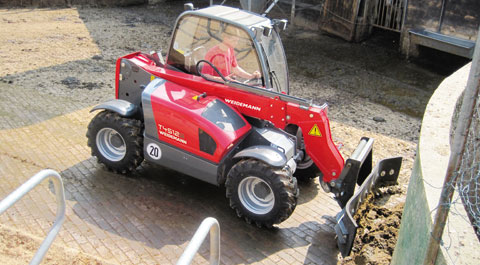 A new generation of mini telehandlers is finding favour on stock farms handling jobs that were once the preserve of tractor loaders. Peter Hill reports

But just as farm telehandlers at the top end of the performance scale are gaining sales as larger farming operations look for increased performance and productivity, so too is a new generation of mini handlers.

With lift capacities typically of 2t or less – and that is before installing a bucket or muck fork – outright lifting capability is clearly not the main appeal of these machines.

Nor is it power – with 50hp tops, and in some cases as little as 30hp on tap, these diminutive handlers can have less than a third of the power available from mainstream telehandlers.

But then they are lighter, too, tipping the scales at less than 1600kg in the case of the articulated Avant Tecno 600 Series handlers and just 2500kg for

The appeal of these machines and others such as the JCB 515-40, Weidemann’s T4512 and the Giant Tendo from Tobroco, is a handy combination of versatility and purchase price, manoeuvrability and size.

Power comes from a Yanmar diesel engine slotted in between the two nearside wheels, with a heady 30hp available to motivate the hydrostatic drive system.

In the hydraulics department, buyers get a choice of 42- or 75-litre/min maximum outputs from a gear pump installation. This enables the diminutive machine to lift 1200kg to the maximum lift height of 4.30m.

There are compromises, of course, other than the relative lack of power and lift. Cab space has to be scaled down to match overall dimensions, small wheels and tyres limit traction and also ground clearance.

But if the working environment is such that these factors are unlikely to cause problems, then the mini telehandler can play a useful role, with all the versatility of their bigger siblings.

A Kramer 1245 is the mainstay of handling operations on a Cumbrian beef farm, being used for all the routine feeding and other work involved in fattening 500-head of cattle.

Until its arrival at Low House Farm, a 120ha 300 acre) unit near Maryport, this work was undertaken by a small tractor and a wheeled loader.

The mini telehandler has been “a breath of fresh air” says beef producer Len Skelton: “It has more than lived up to our expectations and now works every day doing everything from loading our diet feeder and barley hopper to mucking out sheds.

“We’ve also used it for high level maintenance work using a purpose-built safety cage,” he adds. “It’s size and four-wheel steering means we’ve experienced no problems with access, so tasks in all the farm’s buildings have been completed with speed and ease.”

To minimise the cost of switching from the tractor and wheeled loader to the telehandler, local dealer Rickerby of Penrith supplied an adapter so that existing attachments can be used.