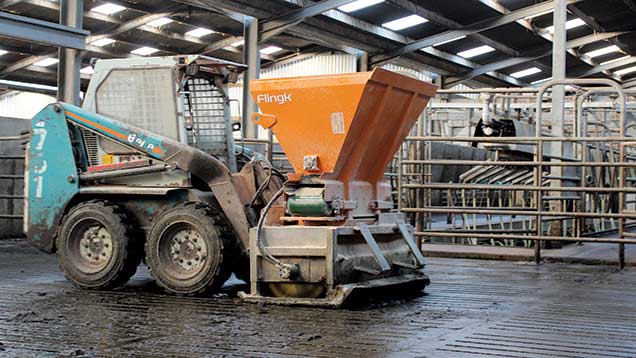 Dairy farmers shoulder a sometimes-harsh reputation for having an aversion to workshops and metalwork. But Ayrshire farmer Robert Drummond is more than happy to wield the welding torch.

He runs 290 British Friesian cows on his 120ha farm nestled bang in the middle of Scotland’s prime dairy lands. He took the reins of the farm in 2007 and operates it alongside a larger family business that includes five other farms.

“We had one of the first 18/36 Boumatic rapid exit parlours installed, which we surrounded with underground slurry tanks.”

Dry-cast slatted floors were a no-brainer, he says, because of the under-hoof grip they provide. Slurry from the parlour holding pen drops through into a 280,000gal tank, while 360,000gal tanks run beneath the two cowsheds.

“I was already spending four-and-a-half hours milking every day But at over £10,000, robot scrapers were too steeply priced to justify.”

In the end Mr Drummond decided to call on an evergreen MF 135 to take on yard-scraping duties. However, the slats needed brushing to provide a clean, dry finish.

Back to the drawing board

“We inherited the Irish-made Belle 761 skidsteer when we took on the farm from the previous owner,” recalls Mr Drummond, pictured below, who set about finding a more efficient way of cleaning the floor.

After a few fag-packet drawings he decided he could use the skidsteer to do the job. It coincided with a switch to sawdust bedding, so the Belle could potentially be used to bed the cows and push up nosed-out feed, all in a fraction of the time.

The fabrication job was done over two weeks and the total build cost reached £1,300. Of that, £1,000 went towards new metal, the hydraulic motor and pipework. Another £300 paid for the finished article to be galvanised to make sure it lasts a lifetime caked in muck.

Four lengths of 100mm channel steel and box section were tacked together to form the bucket brush frame. A lightweight tin deflector up front stops slurry splashing and also keeps moisture around the brush to provide extra lubrication.

Tightly-packed polymetal bristles last about two years before they need replacing and the brush runs on skids that use a hole-and-pin system to provide 18cm of adjustment to accommodate their wear. A full replacement set usually comes with a £520 bill.

A V-shaped metal frame hangs off the front of the brush and can be unhooked when it is not needed. It is made of 5mm-thick plate and works like a snowplough to shove nosed-out food back against the feed barrier.

Once the steel frame has pushed most of the grub back towards the hungry mouths a rubber scraper tidies up.

“I sandwiched the rubber with 75x75mm angle iron at the back and 100mm thick flat bar at the front,” says Mr Drummond.

“Six bolts hold it tight, with the outermost ones threading right through to latch on to the skids. The heads can get worn down, though, so I might countersink them and use cone-headed bolts when they wear out.”

At £240, replacement rubber doesn’t come cheap, but Mr Drummond gets the most out of them by slicing them in half and using both the top and bottom lips. That way, the rubber lasts four years, rather than just one.

The skidsteer’s last job is to bed up, which is done twice a day.

“My original system used a 45gal plastic drum and dispenser sat on top of the brush frame, but it meant wrestling with 25kg sawdust bags,” says Mr Drummond.

So, instead, he replaced the drum with a Flingk hopper. It holds about 140kg of loose sawdust – more than enough for two beddings – which it fires across the cubicles using a 200mm roller auger and rubber conveyor.

“I can adjust the distance of the throw by tweaking the oil flow through the pipes, though I usually run it flat out to get the job done,” he says. “Each side of the shed is bedded in just 40secs, so it takes 2min to cover all 290 cows provided there aren’t any hiccups.”

The bagged sawdust used in the first-generation, drum-based system was pretty pricey, but in switching to bulk buying Mr Drummond reckons he saves about £900/artic load. It’s also quicker to fill each time because the whole hopper unit tips forward on the skidsteer’s headstock to act as a scoop.

“To balance out the heavy front end we initially mounted an old 200-litre Ecobale tank to the skidsteer’s back end between the pivots of the arms, which carried peracetic acid that was piped to nozzles near the brush.”

“The idea was to use the peracetic acid to help lubricate the brush while also helping scrub the floor to kill bacteria,” says Mr Drummond.

In the first six months of using the machine he had practically eradicated dermatitis from the herd.

However, piping the liquid to the brush had little benefit to the longevity of the bristles because the slurry was already providing enough lubrication. So he ditched the tank and watering system and replaced it with four 40kg counterweights.

Mr Drummond has noticed plenty of changes since first using his sweeper five years ago.

“Of the 230 cows milked last year, we had just three cases of mastitis, while the UK average is around the 30% mark,” he says.

“Most of that is down to keeping cows dry and clean. Sweeping twice a day during winter is important because it is at the time when cows are most active, loafing around and making muck. During the night they settle down so there’s far less mess in the sheds.”

Fertility has also improved, reckons Mr Drummond, because bulls don’t slip on the floor as they clamber on bulling cows and sawdust usage has been reduced because cows’ hooves are completely dry before they step into their cubicles.

“It has had lots of benefits for our system,” he says. “However, it won’t suit everyone – you just have to work with what you’ve got.”