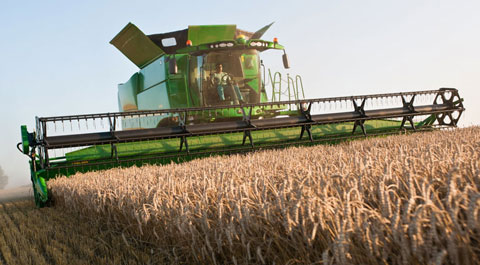 Boasting the largest grain tank on the market, the most powerful engine and new rubber track units, John Deere’s monster S690i rotary combine is out to impress.

The 2012 model has been touring the UK and Power Farming caught up with one of the demonstrators in Cambridgeshire.

At 14,100 litres the tank can hold a massive 10t of grain, which empties through the large-diameter unloading auger in 105 seconds. And the 13.5 litre power plant, which will be shared with the new 9R series tractors, develops 617hp.

Sawing through 19% moisture wheat at 6kph with a 35ft Premium Flow header proved little challenge for the motor and the new in cab power monitor suggested there was plenty of grunt in reserve, even with the chopper in gear.

The engine also offers an extra 30-40hp boost to maintain productivity while unloading on the move and the Stage 3B compliant unit uses the firm’s diesel-only technology with an oxidation catalyst and diesel particulate filter.

New integrated rubber track units are an optional extra for 2012 and are designed in and built in house at Deere’s Hungary factory.

The belts are positively driven via teeth on the top idler and lugs on the tracks, rather than friction drive. Deere says this allows tracks to be run at lower tension, increasing durability, and the triangular design improves your chances of climbing out of a boggy hole rather than digging in.

As well as reducing ground pressure and compaction, the units reduce overall width from about 3.8m (depending on tyre choice) to a more convenient 3.42m and hydraulic suspension means top speed is an ample 30kph.

A streamlined threshing rotor is said to significantly improve straw quality, helped by a new feature, which reduces the time straw spends in the rotor.

By pressing a button on the in-cab screen rotor veins are switched from a standard to advanced position reducing the number of revolutions made by the straw from seven to five.

But even running in the standard vein position, the S690i demonstrator cutting in Cambridgeshire last week was dropping complete straw into the windrow with threshed heads still intact.

Returns are also dealt with slightly differently on the new machine and a separate re-threshing drum has been added at the top of the return elevator to ease the main rotor’s workload.

A 30% bigger cab including a refrigerator and Bluetooth radio, two transmission options and a large diameter rotor are also attractive features.