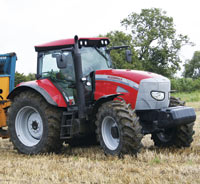 There is one thing almost guaranteed with any tractor range upgrade – there will be more power on offer. That is certainly true of the latest JCB and McCormick introductions

When JCB first developed its novel Fastrac tractor, the concept was to provide a machine capable of routine fieldwork, but with much better haulage performance than conventional tractors.

That was turned on its head for the range that still carries the Fastrac name and still has unmatched performance on the highway, but was engineered to also perform at least as well as any other tractor of the same power in the field.

Achieving that turnaround meant designing an all-new chassis that, for one thing, allows the front wheels to steer tighter for better headland manoeuvrability and, for another, accommodates big wheels and tyres at the back.

Add a new cab positioned further back on the chassis to improve the view to rear-mounted or trailed implements and a new powershift transmission developed specifically for the tractor by JCB and the resulting package turns out to be a thoroughly competent fieldwork machine.

The range launched last autumn comprised three versions with outputs of 178hp, 195hp and 230hp from the Cummins QSB six-cylinder diesel engine. But a fourth model has since been added with 270hp output for a further increase in field and road performance.

Active suspension at the front as well as the rear, uprated four-wheel disc brakes and the all-new transmission, providing 24 forward gears and nine reverse from a six-powershift, four-range configuration, are all part of the 7000 Series Fastrac package.

The McCormick XTX range has also grown with the addition of a more powerful model in the shape of the XTX185. With up to 183hp available once its automatic power boost system kicks in for pto and transport work, the newcomer represents a significant step up from the 145/156hp XTX145 and 167/171hp XTX165, which also have the power-boost feature as standard. 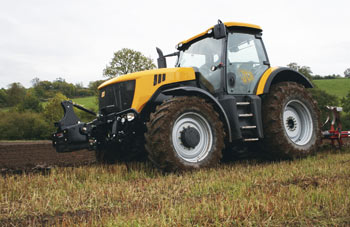 The newcomer also shares the latest XtraSpeed transmission, which is available in two forms – with 32 forward and 24 reverse gears or with the addition of a button-engaged creep gearbox that adds another 16 ratios in both directions, including ultra-slow gears for specialist operations.

A key feature of this transmission, points out McCormick distributor AgriArgo UK, is the eight-speed powershift. With 17% speed increments between ratios, this gives the operator easy access to a wide range of gears to fine-tune ground speed to varying load in the field or on the road.

Each speed is engaged with the flick of a thumb switch on the manual version, which has a range gear lever on the side console or the press of a button on the fully electronic versions, which have a joystick-like controller either on the console or on the driver’s seat. With the latter, the operator also gets up to five electric remote hydraulic valves with flow and timer adjustment.

Changes further down the McCormick range see new cabs introduced for the four-cylinder 80-102hp CX and six-cylinder 117-133hp MTX tractors, plus all-new bodywork for the MTX.

Both cabs are four-post structures, which means they have fully-glazed doors filling both sides resulting in better visibility to either side and a lighter and airier environment in which to spend a day’s work.

Introducing the new cab for the CX completes a package of evolutionary changes that has already resulted in “greener” engines and twin-disc brakes being installed.

The four-post cab brings a roof window for the first time and a fresh interior with new layouts for the instrument panel and right-hand console switchgear and dials.

Mechanically, the MTX continues unchanged. But the new-style bodywork, which is adopted from the higher-specification XTX and TTX tractors, brings a more modern appearance and the practical advantages that come from replacing separate bonnet and side panels with a high-lifting one-piece engine hood carrying more powerful lights.

In addition to better visibility, the tractor’s cabin has new switchgear and a lidded compartment on top of the left-hand mudguard for storage and to provide a firm, flat surface for writing up field records.