Setting up an energy plant along with all the kit to go with it takes some Brexit-style negotiating with the bank, but Edd Mowbray found a Leicestershire farmer who does all the work in-house and hasn’t spent a footballer’s wage buying new tackle.

Paul Sheardown of Sheer Energy, near Belvoir Castle on Leicestershire and Lincolnshire border has managed to dovetail a thriving arable farm seamlessly with a small family-run AD unit by using sensibly-priced machinery.

He farms 360ha, of which a large proportion is tenanted and all of it is on heavy Blue Lias clay. He could comfortably grow cereal crops every year but, with huge fluctuations in the return, having a fixed income alongside the farm has become more important.

Convinced he had to secure the future of the 60ha family-owned farm, he invested £1.3m in an AD plant. With incomes set for the next 20 years, he was keen to make the farm benefit from the plant without causing unnecessary impact to the finely-tuned arable operation. 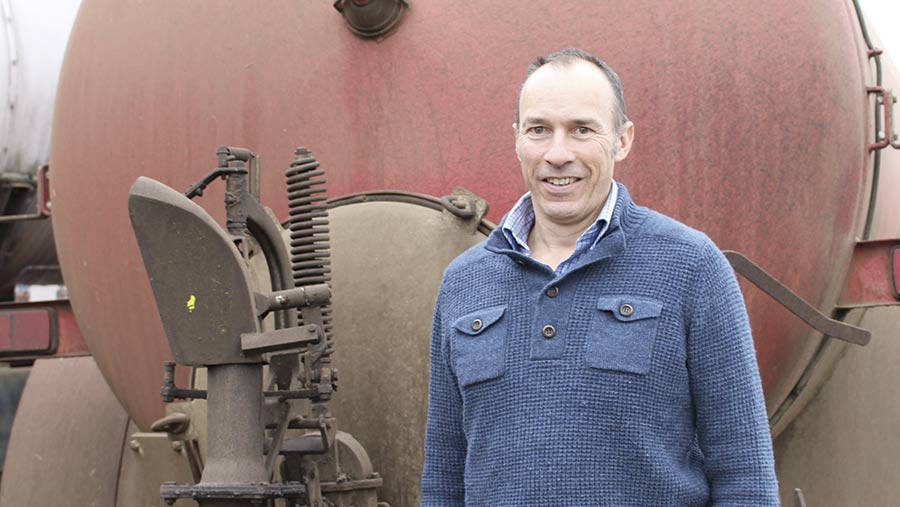 The new the 165kw plant needed to make use of existing machinery and labour.

It munches through 9.5t of rye silage per day so he had to think about how to fill its huge belly. He wanted a crop that wouldn’t impact on his six-year rotation so decided to drill 72ha of rye – just enough to feed the plant for a full year.

Growing rye looked to have extra benefits over a simple silage system for the AD unit. As it’s drilled in September and harvested in June, the crop is cut with plenty of spare time for weed seeds to chit and be sprayed off before getting on with the oilseed rape drilling. 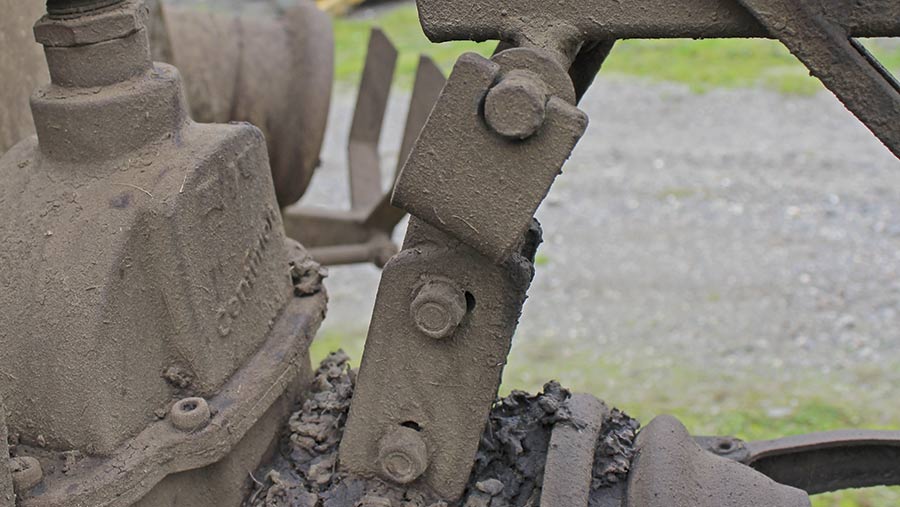 However, once the AD plant started churning away, it became quickly apparent to Mr Sheardown that he may need to stump up a few more quid to empty his rapidly filling lagoon.

He decided dribble bars were far too expensive and, not wanting to rely on a contractor, a pair of tankers looked the only option, although some fine-tuning was needed to fit into his 36m controlled traffic system.

He opted for a brace of Irish-built McCauley 2700 tankers, but did away with the standard plate deflector and opted for a German-made attachment instead.

“I bought a couple of Moscha swivel spreaders – imported by Castleagri – which gave us decent height and spread control at a fraction of the cost of a dribble bar,” says Mr Sheardown.

How does the spreader work?

The simple design of the swivel spout means it’s a 15-minute job to retrofit it onto any make of tanker with clamps to secure it to the rear outlet.

A critical part of fitting is securing the support bracket, which is mounted behind the spout. This keeps the attachment upright and prevents the digestate pressure altering the spout angle.

With no hydraulic power required, the spreader works exclusively on tanker pressure. The operator builds up a small amount of pressure in the tanker and, with the rear chute then opened, the force of the digestate swings the swivel spreader into action. 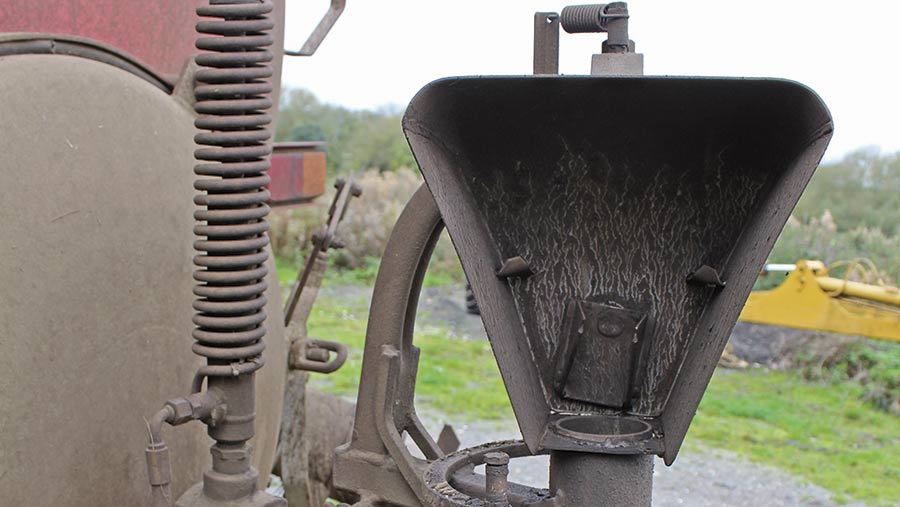 Rotating through 180deg, the spout returns once it taps stops at either end, with spreading width controlled by altering the position of these points.

The spout has an internal fin located on the back plate where a majority of the digestate passes through. The fin angle alters as the spout rotates – counteracting the direction that it was travelling in – and throwing most of material back towards the centre of the spreading width.

Directing the material back to the centre means it doesn’t leave a jagged edge along the sides as the spout rotates, while a level spreading height of about 1,500mm is maintained. This makes it very different to a fertiliser spinner, which spreads through an arc.

“The internal fin gives the operator better control of overlaps and when working alongside watercourses or headland passes”, says Mr Sheardown.

“Tractor forward speed is determined by the flowability of the material. For instance, we spread at speeds of about 7kph with the thicker digestate that contains a few lumps. Comparatively, the lighter stuff can see us motor along at 10kph.”

See Paul Sheardown’s video of the swivel spreader in action.

One of the main benefits of using the swivel spreader is the option of travelling on land throughout the whole growing year, which is important given that his slurry lagoon can only hold around six months’ worth of AD waste at a time.

“In a typical year, the arable crops will get two applications – one after drilling in the autumn and the other in April.”

“This ties in well with the lagoon capacity and, because the tankers are shod on 800/65 boots that are set to about 8psi, the crop damage is minimal.”

The spout covers the ground evenly to a 12m width, chucking on between 10-14cu m/ha running through a 10,000-litres/min Hertell pump.

Due to the swivel mechanism, the droplets produced are larger than a standard plate deflector. This is designed to reduce the smell and improve the accuracy of digestate placement.

However, once the wind gets up the droplets atomise and form a fine mist, which limits throwing distance and distorts the spread pattern.

“The benefit of having two spreaders and not relying on a contractor means if there’s a thick spring frost we can spread a few loads early in the day before the soil turns soft again – using a contractor with an expensive setup wouldn’t give us the same luxury.”

Mr Sheardown has hand-rogued blackgrass for almost 30 years on his 360ha farm. It takes around 10 days for two people to walk the farm with a knapsack, spraying the affected areas, but it means there is very little weed infestation in an area of the country where blackgrass has a firm grip.

The farm’s six-year rotation plan includes three winter wheats intersected with oats, oilseed rape and beans, as well as the rye needed for the AD plant. In return, the plant provides digestate to fertilise the crops and also allows a couple of fields to be harvested early, ready for oilseed rape drilling.

Both tankers have swivel spreaders fitted which have a grand total of three grease nipples and have been faultless through the last two seasons of use.

The final bill for each tanker was about £10,000, with the swivel spreaders coming in at just under £800 – a comparatively cheap set up with much less outlay than a twice-yearly contractor or purchasing a dribble bar.

Running two tankers of the same size mean Mr Sheardown can have one carting on the road, while pumping digestate into the other tanker at the field edge, which stays dirty therefore keeping the tarmac clean.

During the spring growing season Mr Sheardown has noticed the rape crop benefitting from the digestate around two weeks after spreading.

“The oilseed rape is noticeably greener a couple of weeks after spreading and while we haven’t done any yield comparisons, all the soil looks healthier, as do the crops.”

Sheer Energy, near Belvoir Castle on Leicestershire and Lincolnshire border