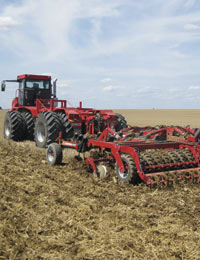 The concept is nothing new: Why use specialist self-propelled machines and tractors when a single power unit could do the job of both?

But much as that idea is attractive on paper, it has always been pulled up short in the real world by cost, compromise and, sometimes, a clash of priorities.

Critics argue it is better to open the barn doors, roll out the machine you need on the day and get the job done than mess about swapping equipment on a multi-purpose unit.

As a result, machines that seemed to promise economies foundered; like the New Idea Uni-Power of the late 1980s, which had interchangeable grain and forage harvesting modules, and the first-generation Claas Xerion, which could work as a beet harvester and (in prototype form) as a grain harvester, and as a forage chopper and tractor.

The Mercedes-Benz MB-trac and JCB Fastrac have successfully provided a degree of “systems tractor” performance in being able to carry equipment such as a sprayer or fertiliser spreader top-up hopper on their rear decks, but have not tackled the diversity of operations envisaged with the multi-purpose concept.

But maybe the tide is turning. As farming operations get bigger and cost pressures demand ever greater productivity from operators and the power units they drive, the versatility of a “multi-purpose systems tractor” is beginning to have more relevance and become more affordable.

The current 380hp Xerion is the most obvious example. While most operators still use this machine as a very competent, high-horsepower field tractor there are some that embrace its versatility by using the machine for quite diverse operations.

German manufacturer Holmer is also pitching at the potential market for multi-purpose vehicles – and on a grand scale. With more than 600hp under the bluff bonnet of the Terra Variant, this is on par with the Challenger MT900C articulated wheeled tractor as the most powerful tractive unit in series production.

What cynical operators have to look beyond is the fact that with its forward-control cab and long wheelbase, it looks more load-carrying truck than high-performance tractor.

True, the cab position clearly compromises the operator’s view of rear mounted or trailed implements and it is in that position to optimise its potential as a load carrier.

But the Terra Variant is certainly not short of the technical kit needed to operate as a tractor – a heavy-duty three-point linkage with electronic draft control; 190-litre/minute load-sensing hydraulics; 1000rpm pto and an 18-speed full powershift transmission as used in John Deere 9030 Series four-wheel drive and tracked tractors.

Moreover, four-wheel steering gives the sizeable machine decent manoeuvrability in the field as well as the ability to spread its weight over four wheel tracks with the diagonal or crab-steer mode engaged, while the 40kph top speed helps it move at a decent pace between locations.

Of the 70 or so units produced over the past two-and-a-half years, most have gone to contractors or groups of farmers for slurry application but there are units used for cultivation and seeding, the company reports.

Interchangeability of chassis-mounted equipment is a key feature of the machine and with the latest version swapping a Zunhammer slurry tank for a Bergmann manure spreader is reckoned to take little more than an hour.

For the arable sector, Holmer has kitted out the Terra Variant to work as a self-propelled grain chaser bin, hauling crop on its 800 or 1050 flotation tyres to trucks or trailers parked on the headland or a convenient hard-standing.

It also envisages using a hopper to automatically top-up a fertiliser spreader carried on the three-point linkage and has produced a self-propelled seed drill with a large Horsch tank carried on the chassis feeding a tine cultivator sowing system behind.

Carrying such heavy equipment is more efficient than pulling it as a dead weight, is one of the arguments for such a set-up. 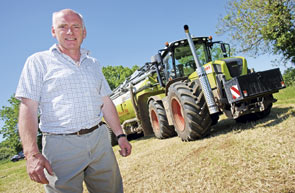 Oxfordshire contractor Charlie Baker and his sons are embracing the versatility of the Claas Xerion’s multi-purpose design with three examples of the tractor tackling a diversity of tasks.

There are two 3800 Trac VC models, which can be used conventionally and in reverse-drive configuration, and a 3800 S-Trac with fixed central cab and a fifth wheel coupling for towing a large slurry tanker.

Come the silage season, they switch to reverse-drive mode with the cab rotated from is forward-facing central position to a location looking out over the main three-point linkage. In that configuration, one handles a triple mower-conditioner while the other keeps the clamp filled and rolled as grass is ferried in by the silage team.

The S Trac spends 80% of its time with the 24,000-litre slurry tank, its semi-trailer configuration putting a proportion of its weight ahead of the Xerion’s rear axle to ensure both axles make maximum contribution to the outfit’s tractive performance.