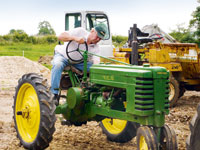 John Deere fans are a loyal lot, so we were expecting a hatful of entries when we launched a competition asking you to tell us about your very first John Deere. Especially when we threw in a prize in the form of Don Macmillan’s 288-page book, The Bigger Book of John Deere Tractors.

And we weren’t disappointed. Devotees of the yellow-and-green brand emailed us and posted their comments on our website forums in considerable numbers.

Here’s the winner and a selection of others.

My father took some cows to Cambridge market in the spring of 1952 and came home with a John Deere model H in the cattle truck.

The little H was my tractor and I spent many hours tedding hay with a Lister Blackstone side-rake and swathing with a trailed Vicon rake.

The H was easy and light for a kid to operate and the flywheel start didn’t kick like the old Fordson. In the winter, when there was no field work, the H made good use of the belt-pulley running a Bamford rolling mill and on a logging bench.

I left college in 1964 and took the H with me to my first job away from home in Buckinghamshire. The tractor was now on duals and towed a Massey landwheel-driven muckspreader on a daily basis.

In 1966, I moved to Hertfordshire and took my H with me, although it did not work here and was laid up in a “safe” barn after I left to work overseas in 1968.

On a home visit in 1970 I found the tractor rolled out and left to the elements. I found storage in Northamptonshire and left it in another barn.

A few years later the barn caught fire and the tractor was given away to a good home in its scorched condition.

In 2000, I found an original parts book given to me many years previously. With the help of my nephew in Northamptonshire, I found my first tractor and reunited it with the original handbook. The wheel centres were welded to Massey rims, an old Fordson magneto had been adapted and it was seized.

Back in Dorset, immersion in diesel worked wonders, while correct wheels were found in Yorkshire, tyres in Essex and a new mag from Canada.

Now, 69 years after it crossed the Atlantic, my first John Deere is running like a sewing machine.

The first John Deere I drove was a 4020 powershift, it was hired in to subsoil at a neighbouring farm by a contractor. I was the pilot; it was around 1975.

The work was divided between three contractors, the other two had a new Case 970 and a Roadless. The farm manager was sceptical whether the 4020 would be able to cope with the twin-leg subsoiler with its half-worn tyres.

The JD was set to work alongside the others and the acreage had been divided into equal sections. It was a Thursday morning. I finished on the Sunday evening, went on holiday until Friday, the other two were still working on my return.

In 1948, my father bought a second-hand John Deere model H (Chassis type H39309). Two close wheels in front, mid-mounted toolbar. First registered in 1941, licence five shillings, it was used for row crop work, hoeing sugar beat, ridging up potatoes, and so on. As a John Deere had a hand clutch, I drove it at a very young age (having to put my foot on the axle to give me extra strength to flick the fly-wheel). My jobs included towing the binder and an engine-driven Allis-Chalmers trailed combine. Other duties included pulley work on a Massey Harris hammer mill and a Ruston thrashing machine. Today, we drill our crops with the articulated John Deere 9400.

Toys for the boys

My first Deere was an absolute monster – and completely unforgettable. During the holidays and at weekends, I would be out on it every single day – when I was permitted to of course. It was the perfect materials-handling tool thanks to the front-loading shovel, but it was also great for towing the trailer and the water bowser. Rough terrain was rather more a struggle due to the fact that this particular John Deere required the use of my legs to pedal it. I hope a Rolly Toys John Deere 6920 qualifies as a first JD. I shall never forget those happy days pedalling away.

• Do you have particular memories of your first John Deere tractor? You can’t win the book as that’s already found a home – but share your thoughts and memories on the forums