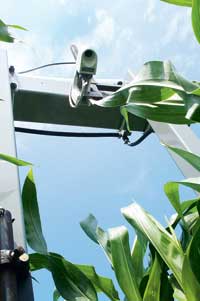 Yara reports there are now about 120 N Sensor units operating in the UK with a 50:50 split between those that are rented and those purchased.

Looking further afield into Europe, this year could see the total number of N Sensors topping the 1000 mark, which is largely down to Germany where the technology was first developed and where there has been an attractive subsidy in place.

But whichever way you look at it, 10 years after its launch the N Sensor system has not exactly captured the imagination of the majority of growers – despite there being ample evidence that useful yield increases can be expected.

According to Yara, growers using the system to apply variable rate nitrogen could expect a 3.5% yield increase in wheat and 4% in oilseed rape. Which, says the company, makes renting an N Sensor a viable proposition when 600 or more acres of crops are grown.

The honeymoon period for the Yara N Sensor is drawing to a close and there is competition looming in the form of two US companies – each of which claims their products do everything the Yara version can do and are about half the price.

Electronic systems giant Trimble has launched the GreenSeeker – a development from Ntech Industries that was introduced to the US market a few years ago. Trimble intends to promote the product to the UK this year.

The aim of all these systems is to apply specific rates of nitrogen that meet precisely the requirements of a specific crop area – no more and no less -and also allow the maximum yield potential to be realised. 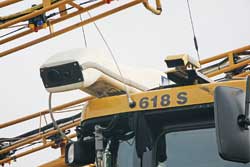 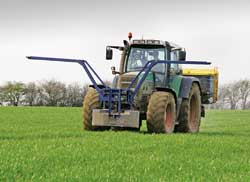 A significant amount of work has been done to create tables and charts to provide operators with application rate information, although there is still a lot to do to widen the range of crops where the sensor units can be usefully employed.

But back to the sensor units that have been designed to allow variable rates of nitrogen to be applied and compensate for the variation in soil available in a field. These can be caused by water movement, previous cropping or by muck or slurry spreading. The clue to different soil N rates can be found in the plants growing on it – the amount of crop growth and the crop’s colour.

The Yara N Sensor differs significantly from GreenSeeker and OptRx, although all three employ light transmitting and reflective receiving systems with analysis made of the incoming signal to determine application rates.

The big difference is in the placement of the sensors – Yara places them on top of the tractor cab and sends angled signals down to the crop, while the other systems have sensors positioned on booms to place them directly over the crop.

This, while seemingly being pretty innocuous, is an important difference and means the overhead sensor is assessing the crop’s vegetation index data (NDVI) and, from this information, deducing that the crop needs a certain amount of nitrogen to be applied.

Yara says its angled sensing is better able to assess the plants’ nitrogen status and its requirement. The company insists that the NDVI is not always a reliable measure or indication of nitrogen requirement.

Against this, Trimble points out that the GreenSeeker RT200 takes numerous NDVI readings and provides an average across the zone being treated.

AgLeader says OptRx only relies on NDVI in the early plant growth stages but has a secondary sensing system, NDRE (Red Edge), that is deemed to be more accurate when the crop has created a canopy.

It says that with smaller and lighter sensor units, it is possible to have them on booms so that wider and more representative samples can be taken across the working width of the spreader or sprayer.

The future could see liquid fertiliser sprayers having variable rate application for individual boom sections, each receiving their information from sensor units mounted at intervals along the boom.

Having an N-sensing system is only part of the story. The information received needs to be passed on to a controller that can then change the application rates accordingly.

While technology exists for effective variable-rate nitrogen application, it calls for a hefty investment in electronics. But if there are significant increases to be had in crop yields that can produce a return on this investment, then it starts to make sense.

With more players on the scene, there is a chance that N-sensing systems could come to the fore this year – and equipment prices could start to tumble as a result.