Kubota has launched a new 108hp tractor aimed squarely at the livestock sector.

Having only entered the mainstream agricultural sector 4 years ago, the Japanese manufacturer reports to have achieved a significant grip on the market.

The M108-S incorporates a number of new features that the firm hopes will appeal to an even wider audience. 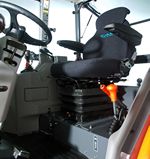 Transmission remains much the same as before. A 32forward/32reverse unit – four manual changes are made through a standard H-pattern gate.

Knocking the lever right or left duplicates these four manual changes through an electro-hydraulically operated clutch-pack, to give a total of eight.

A clutchless gear-splitter doubles the number of speeds to 16, all of which operate in either high or low range.

With the launch of the M108-S Kubota is also introducing its own loader. Specification includes hydraulic self-levelling, suspension and Euro8 attachment carriage.