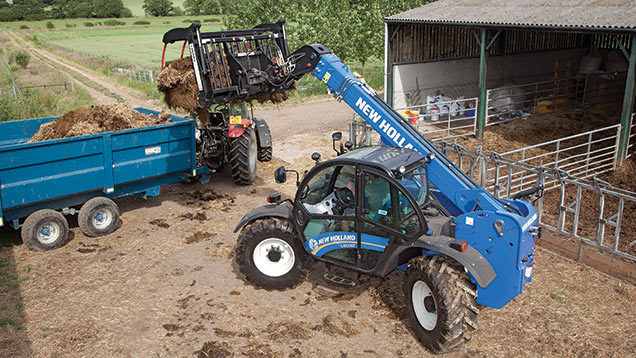 New Holland might have the small tractor market sewn-up, but it seems the world of telehandlers has been a trickier nut to crack.

Believe it or not, New Holland’s involvement in the farm loader market stretches back to 1998.

Those early ancestors of the current LM range were sourced from French specialist Manitou. By 2007, New Holland had decided to take the assembly work in-house, though its three-model LM5000 range failed to make a dent in JCB’s sales figures.

But, desperate to get a stronger foot in the market, the company has given its telehandler arm some strong backing over the past few years.

A new production line dedicated to building the LM was opened, but with a big investment comes the heavy burden of expectation from the New Holland hierarchy.

The latest machine keeps the big cab and basic appeals of the LM5000 series, along with a new headstock and refreshed controls.

We tried out the flagship LM7.42, which is part of the higher spec Elite range.

Let’s start with the cab. It is a big, single-step climb up into New Holland’s high-ceilinged office, which is particularly long and leaves leggy operators with plenty of space to stretch out their pins.

The unusual shape of the curve-fronted cocoon is supposed to provide A-grade visibility.

It is achieved in the main, but all the work to keep the boom tucked low is in vain because of the big, square bonnet.

The bang average view to the right is the penalty for having to ram-pack the engine bay with emissions paraphernalia.

What about the controls?

Rocker switches pinched from CNH’s tractor stable deal with most of the functions, including the handbrake.

Labelling is occasionally erratic, but more significant from a driver’s point of view is the loss of the left-hand shuttle.

Joystick buttons now manage New Holland shuttle shifts, but such a radical change of controls is bound to ruffle feathers. Merlo has done a similar thing with some of its newer machines.

The design, in New Holland’s case at least, is flawed because it’s impossible to move the boom or operate the third service and change direction with just one thumb.

Incidentally, the new joystick only applies to Elite models, so you will still get a left-hand shuttle if you stick with the cheaper, standard versions.

Has it got the power?

As you might expect, Fiat is the engine maker of choice for the blue brand’s telehandlers.

For the 7.42 it’s tuned to chuck out 143 horses and is the same block as you’ll find in the Basildon-built T6 tractors, so it will also need a supply of AdBlue.

That’s a considerable climb in power from the 5000-series predecessors, which topped out at 120hp.

There’s no doubt it has got the muscle, but during heavy pushing the EN15000 load-limiting system too often comes into play and stops any hydraulic operations before they have begun.

In New Holland’s defence it’s the same story on many new telehandlers, and it’s far simpler than Manitou’s migraine-inducing set-up.

If you want to try this telehandler and countless others from most of the big players in the UK then the Farm Handling Experience will be back again next year.

It will take place at Stoneleigh Park, Warwickshire, on 20 and 21 April and is the only event that allows visitors to drive different machines back-to-back.

While other makers have been bolting stepless boxes to their biggest machines, and despite New Holland’s little ‘uns still using a single speed hydrostatic, the company has stuck with a torque convertor set-up across most of its range.

It carries six forward speeds, three of which can be shifted automatically.

Transport mode, which locks-in above 12kph and in third gear, pins the back wheels straight to improve safety as the eight-tonne lump nears 40kph.

However, you wouldn’t know you are travelling at break-neck speed in the cab.

The designers have managed to muffle the noise from the block, which makes it one of the quietest machines on the market.

How about the hydraulics?

Big horsepower is paired with some equally meaty hydraulics.

Buyers can now have a bigger 140-litres/min variable displacement pump, rather than the 120-litres/min set-up on the standard models.

The designers have also been back to the drawing board with the front headstock.

The low profile shape should reduce the risk of puncturing the ceiling while stretching for the top of the bale stack.

Headstocks on the Elite versions also tilt by an extra 11deg, which cuts the need to shake the bucket and reduces wear and tear in the associated pins and bushes.

What else is in the range?

If the 7.42 doesn’t fit the bill but you’ve got your heart set on a NH telehandler then there are six others to pick from.

The small 5.25 and 6.28 are bolted together by Italian firm Dieci before being given a lick of New Holland livery.

You can also get the same machine in Case colours if you are a fan of the cherry red machinery.

It’s got plenty going for it – the headstock is handy for anyone working in sheds and the cab is very quiet and pretty comfortable.

There’s no doubting it brings plenty of power to the party too, but transferring that grunt from the flywheel to the shed floor wasn’t always easy.

It also seems quite steeply priced and the joystick layout needs work. School report reads: Good, but could do better.