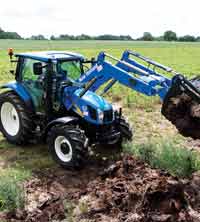 New Holland now has versions of its T6020 and T6040 tractors specifically designed for loader use. Emily Padfield got her hands on a T6020LS to see how it performed

There’s something mightily wholesome about a well-proportioned loader tractor, a little like Nigella Lawson in an apron standing next to the Aga cooking breakfast.

Too small and it looks as if a bucket-load will upend it; too big and it’ll get stuck up against the feed passage and potentially decapitate your highest yielding cow in the process.

Loader tractors have come of age in recent years. In times gone by, these workhorses rarely combined performance with petiteness, leaving users to have one main tractor for field work and one loader tractor for jobs around the yard. 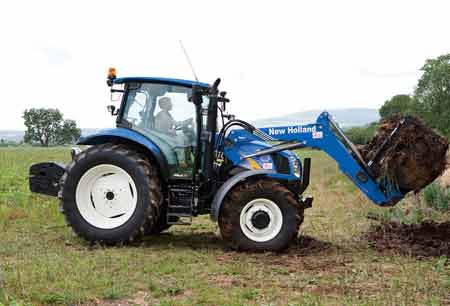 Now most manufacturers offer small but powerful models and many reckon New Holland was among the first to corner the market with its 7740 back in the 1990s.

It’s a market the boys in blue are keen to be dominant in, too and, as a result of a brainstorming session in Basildon HQ in early 2009, the idea for a spec’d-up specialist loader tractor was borne.

Following the launch of the T6000 range in 2007, NH has morphed its Delta and Plus models to produce the LS (loader special) model. A low-profile cab means the tractor stands at a mere 2.74m while higher output hydraulics of 113 litres/min and an extra steering pump of 40 litres/min promise to boost work rates.

In practice, having this additional oil-flow means that you can operate the loader at a workable speed even on tick-over and you won’t have to up the revs unnecessarily. Good for fuel, and good for noise levels too.

A mid-mount valve-block and loader towers are factory-fitted which means it’s pretty straightforward for the local dealer to bolt on a loader without having to tinker about with anything else.

Other LS additions include a seat-mounted joystick and memory power shuttle, which remembers your last forward/reverse gear to avoid extra shifting and spent fuel.

Pivoting front fenders allow tight steering without the fear of that worryingly wheel-rubbing noise, while the Terralok system (standard on all T6000s) disengages four-wheel drive and reactivates it when you straighten the wheels to charge into the muck heap once more.

A heavy-duty front axle, standard throughout the T6000 series, is robust enough to support the extra weight plonked on it by the new loader, yet the tractor itself feels light and manoeuvrable enough to cope with the most cramped stock yards.

The model we tested was fitted with one of New Holland’s Stoll-made new range of loaders, the 750TL. By locating the self-levelling system inside the strengthened boom, and hiding the suspension accumulator bottle away in the crossbeam, visibility to the front is good, and there’s little chance of catching any pipes on unruly fixings, either.

Lift capacity of 2260kg, coupled with the hydraulic output of the 6020, seemed punchy enough for the stacking and muck-heap work we tackled on test.

Also new on the loader is increased crowd ram stroke, meaning you can tilt a full 70¡, quite an improvement on the 46¡ on the previous range.

NH is keen to stress that, to fit in with stock farmers’ priorities, it’s cut the extras where it can to reduce costs on the new model. And, to this end, livestock boys are bound to appreciate the simplicity of the LS model. The 112hp 4-cylinder mechanically governed engine, with its 600-hour service intervals, seems to have plenty of grunt and, tested against a mountain of overgrown muck, coped admirably.


Although lacking cab suspension (it’s an option on the 6020 and standard on the 6040), round the yard the “deluxe” air seat has lots of adjustment options.

The cab has all the innards of the Plus option, only with the lower roofline of the Delta, which reduces overall height by 138mm (5.5 inches), with four pillars and a roof panel for better visibility round the yard.

Inside, it’s remarkably quiet, testament to its 70dB sound levels, making it the calmest tractor in its class, according to NH.

It was interesting to see the return of the front-opening screen, which operators can open to demist and get a through-flow of air. How long it will take before the cab gets full of dust and straw will be anyone’s guess, but it’s a feature that many customers have asked for, say NH.

The 16Fx16R Electro Command transmission feels familiar, while the power shuttle requires that nonchalant flick for clutchless forward/reverse shifting. The seat-mounted joystick is standard, but with the seat right forward for a smaller operator it can interfere with the gearstick when crowding to the right.

Controls seem operator-friendly and recognisable, while buttons are all duplicated on side console for thumb operation. The electronic draft control feature is simply laid out in a computer mouse formation, similar to that of the Sidewinder armrest which appears in the 6020s larger siblings.


Changing PTO gearing is self-explanatory, while a button on the side lets plates slip to line up teeth and change from 540 to 1000, a handy feature.

Extra rail-mounted work lights are factory-fitted, as are fender controls common on the rest of the 6000 range. Features like hands-free Bluetooth and an iPod connection – now standard on all New Holland tractors – means it’s not completely without the little luxuries.

Servicing is pretty straightforward, with good access under the one-piece bonnet despite the loader brackets and radiators able to be slipped out for cleaning easily enough. A sight-glass to the rear is good for a cursory glance at hydraulic levels.

Hitching and unhitching the loader is fairly hassle-free. It unclips and slots out relatively easily, making it a mere five-minute job. Self-adjusting stands means it can be left on slightly uneven ground without the fear of not being able to get it back on.

Like Ronseal, the LS does exactly what it says on the tin. It strips out the fancy gadgets and gizmos and replaces them with hardware which improves loader performance, visibility and manoeuvrability. Despite not having things like cab suspension, other luxuries like Bluetooth radio and opening front window mean it’s a tractor you won’t mind spending in the best part of the week driving.