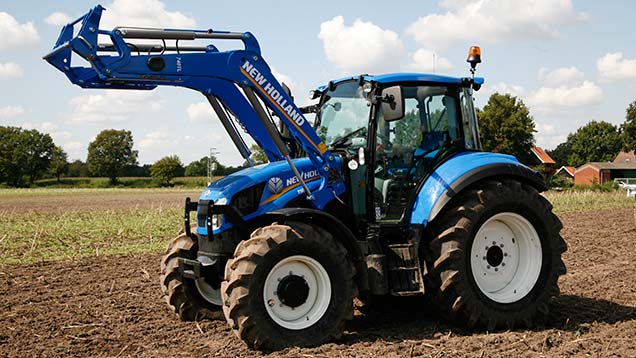 New Holland’s six-pillar cab is trimmed with light-blue interior panels that have a habit of picking up dirt and end up looking tatty pretty quickly.

On the plus side, the front windscreen arches towards the ceiling and a slim beam runs between it and the sunroof to provide decent loader visi­bility. The views elsewhere are good, too, although the short, fat bonnet means the loader can be difficult to see when it’s on the deck.

The passenger seat and steering column are spring assisted, but low-hanging wing mirrors ruin access through either door. Also, when you adjust the height of the steering column the shuttle stick stays behind, which is a nightmare for bean-pole-legged operators.

What the New Holland lacks in spec it certainly makes up for with its 99hp-rated Fiat engine. We found heaps of torque during ploughing and, sipping just 256g/kWh at max power, it was the most frugal on test.

Its only weakness was the lack of some engine-speed memories. There are no digital read-outs of engine revs, either, although the analogue counter is perfectly good. At 600 hours, it also had one of the longest service intervals.

New Holland’s Dual Command gearbox was one of the more simple transmissions on test. It provides three ranges, four gears and two powershift steps, for a total of 24 speeds in each direction.

Switches between the low and high powershifts are generally smooth, however, the 40kph top speed came at a hard-working 2,400rpm and made things louder than they needed to be in the cab.

Elsewhere, transmission ergonomics were distinctly average. It’s not possible to switch ranges on the move, while the main gearstick is a long stretch for the driver and its sloppy feel means it can be difficult to know what gear you’re in.

Adjustments are few and far between, though you can tweak the return-to-centre shuttle sensitivity in three stages. It’s a nice idea but the differences at either end of the scale need to be greater.

The New Holland arrived on 34in Trelleburg wheels, but bigger 38-inchers can also be specced if you’ve got a bigger budget.

It measured up pretty close to the average, both in terms of size and turning circle. However, a 2.7t payload was one of the worst on test. Four-wheel drive and diff-lock are activated via toggle switches, but there isn’t much in the way of automatic functions.

The T5’s base spec includes a run-of-the-mill 84-litre gear pump, which delivered exactly what it promised.

All three external spool connections are located to the right of the top link, something we continually found made things awkward when coupling up implements.

There’s a generous level of hydraulic control, though. Flow of all three valves can be adjusted manually on the main valve block and, usefully, all three have float and are lockable through a B-pillar switch. It’s also possible to adjust the kick-out on two spools.

In-cab adjustments include a dial to adjust the sensitivity of the draft control, which was useful when ploughing.

Three speeds – 540, 540e and 1,000 – are available from the pto, selected by a lever that has been shifted from the left of the driver to a more logical position on the right-hand console.

There are also controls on both fenders, however, unlike its red-liveried relative there are no automatic functions available – these are reserved for the Electro Command version.

Stoll builds New Holland’s factory-fitted loaders, as it does for Case and Deutz. Quick-coupling pipework and a soft ride damping system is standard
fare, while oil flow for the mid-mounted valves can be adjusted in the cab and control is through an electric joystick. However, we found it was knocked too easily with the seat close to the wheel.

Despite the loader being one of the lightest on test it had heaps of lifting power, averaging more than 2t, and also reached up to 3.81m.

The New Holland came with a pretty basic spec, which left it inferior to the Case in almost every way. Its saving grace was an efficient engine, though we’d definitely find space in the budget for a better transmission.