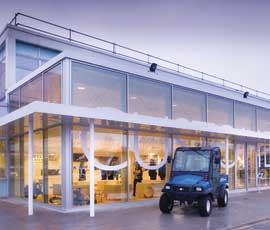 Designed to give potential buyers and other visitors the full factory experience, the new 600sq m addition to the plant entrance at New Holland’s Basildon facility in Essex is the first part of a two-stage plan. This is to welcome current and potential New Holland customers and other guests to the plant and the brand’s UK headquarters.

“We host more than 2,000 visitors at our Basildon factory each year,” explained New Holland UK managing director Andrew Watson at the centre’s opening. “The new facility provides a more impressive entrance into the plant for factory visits, and later this year we plan to extend the visitor facilities with a separate building displaying the range of other products available from New Holland.”

The plant, which was opened by Ford in 1964 and on average turns out 484 tractors each week, makes New Holland’s T6 and T7 tractors for markets around the world. At the recent British Manufacturer of the Year Awards, it won the World Class Manufacturing Award and was runner-up for the overall Manufacturer of the Year Award. Eight new apprentices were taken on in 2011, the first such additions for 19 years, joining the existing staff of about 1,000.

According to New Holland European vice-president Carlo Lambro, the Basildon plant, which assembles tractors from components built in other CNH factories in countries such as France (cabs), Belgium (axles, transmissions) and Italy (engines), remains central to New Holland’s future.

“Our business has performed very well this year, with sales up in all our main product areas. From January to November, European tractor sales were up 15%, combine sales up 25% and baler/forager sales up 34%. Our aim is for a 1% sales rise generally in 2012, coming particularly from the tractors above 100hp, which Basildon produces.”