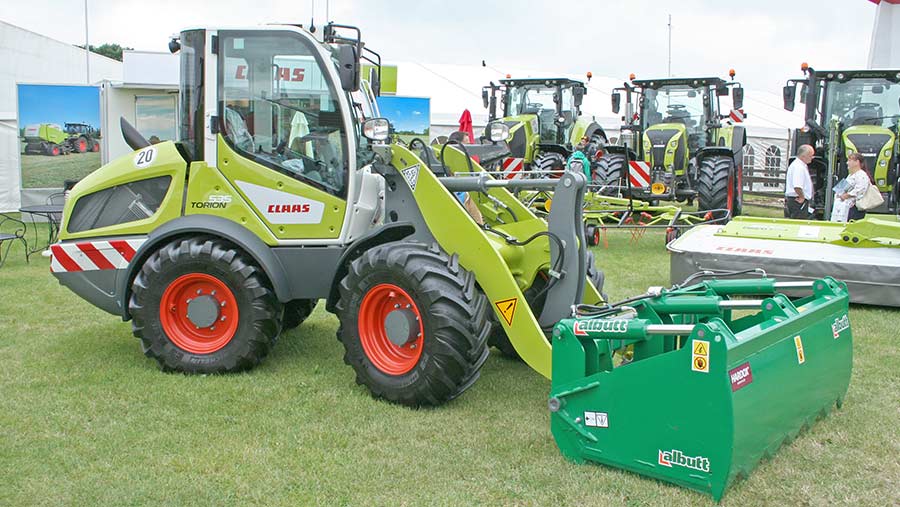 There was plenty of new machinery to keep visitors occupied at this year’s Royal Welsh Show.

We pick out the best bits, including two new compact models in the Claas Torion range, a well-priced ATV from Kymco, and a fresh model in the Same tractor line-up.

Wheeled loader options have expanded with the addition of two compact models to the Claas Torion range.

The 5t Torion 535 exhibited at the Royal Welsh Show (above) and its 5.47t stablemate – the 639 – are powered by 3.32-litre Yanmar four-cylinder engines with 63hp and 68hp respectively, mounted in the tail of an articulated chassis.

Gear pumps of 70- and 77-litre/min output are used for the working hydraulics, giving front end lift capacities rated at 3.45t and 3.85t (fully articulated tipping load) via a Z-bar linkage designed to give high levels of break-out force and fast implement tipping and crowding movements.

While the newcomers lack the auto bucket return of larger Torion loaders, there is constant flow available for driving hydraulic motors on bedding, feeding and sweeping implements and ground speed adjustment with constant engine revs. 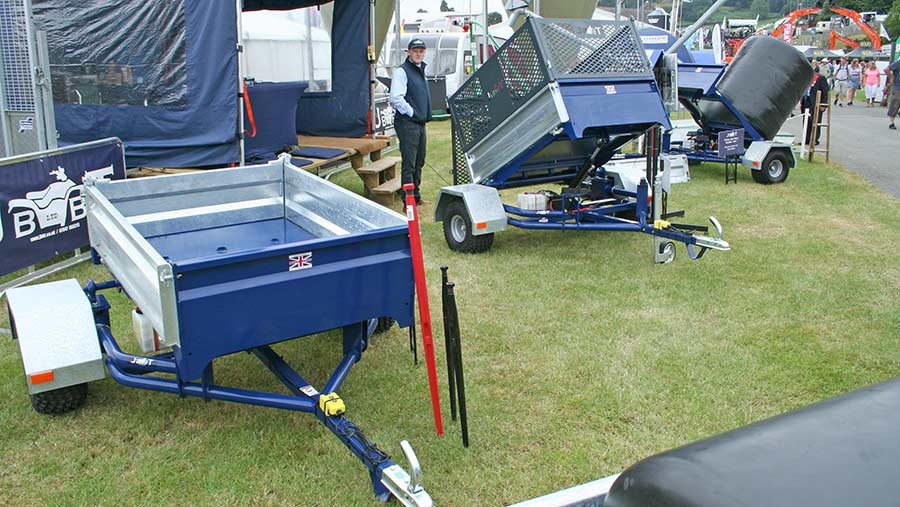 At last year’s Royal Welsh, young engineer Jim Beaty showed a prototype multi-tool for towing behind an ATV that has become a fully fledged production implement.

It’s readily convertible between trailer and bale transporting configurations, using a battery-powered hydraulic tipping system to either discharge a load or to spike and lift a big round or rectangular bale.

JBBT offers mesh extension panels for the sides, headboard and tailgate to add volume for £450, a 500-litre water bowser for £350, and a £40 road kit.

This adds to the spec of the base BBT 3.0, which includes single or twin spikes, flotation tyres and a tow bar skid for £2,500.

A log splitter, sprayer and sheep feed snacker are on the drawing board for the heavy-duty trailed device. 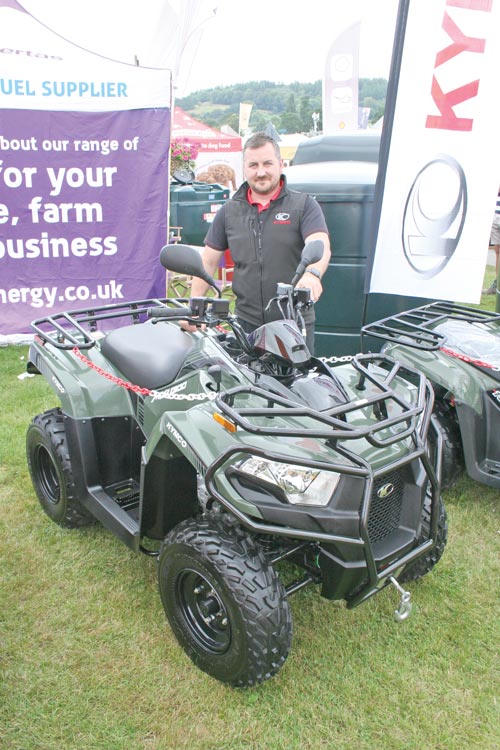 A new version of Kymco’s two-wheel drive 300 ATV is on its way with a fresh look that includes bull bars fitted as standard along with a tow ball and seven-pin electrical socket at the back.

LED lights are also part of the revised package, which is aimed at smallholdings, equestrian establishments and other rural enterprises, including farms in areas where the added traction of four-wheel drive is deemed unnecessary. 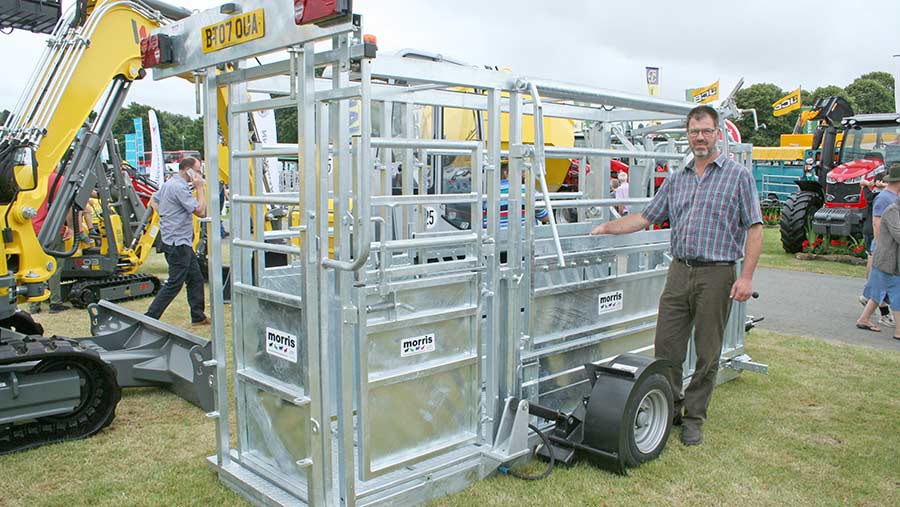 Pete Jones, of Morris Livestock Handling Equipment, reckons this is the only cattle crush towable behind a 4×4 that is fully approved by DVSA, the successor agency to VOSA that oversees road vehicle and operator compliance.

The High-Speed Mobile Cattle Crush is configured to meet the exacting requirements for a “trailer”, in respect of such things as the provision and location of road lights and reflectors, and its overall weight and weight distribution.

“It’s been evolved from our tractor-drawn models, but has high-speed running gear with hydraulic lift cylinders that also provide suspension,” Mr Jones explains.

“It’s very nicely balanced and, as I know from running it down to the show, it tows very well.”

In addition to farms, he expects the crush to appeal to vets carrying out TB testing and other work on farms that lack sound handling facilities.

Base models start at £9,650; accessories include a head scoop, weighing and foot trimming facilities, and there is also a hydraulic squeeze version with powered side panel, head scoop and head yoke. 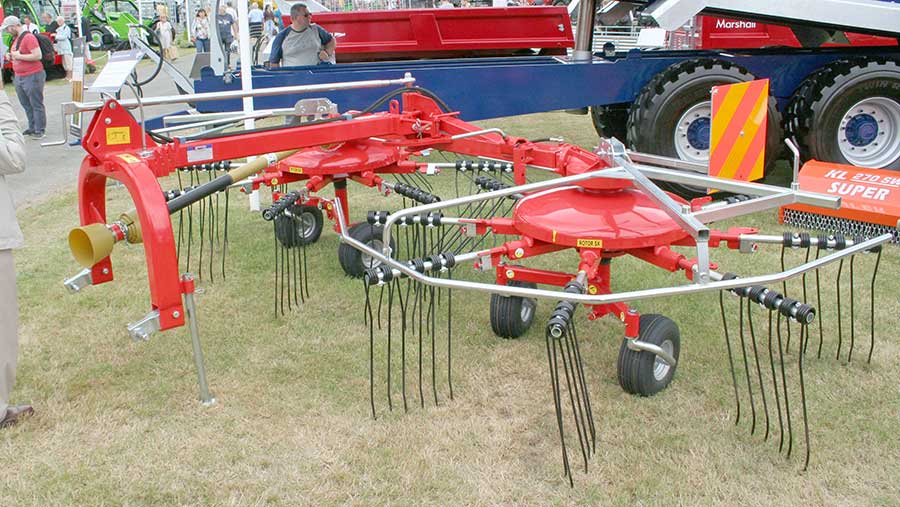 A compact twin rotor grass rake that transports in-line behind the tractor is a new addition to the Weaving Machinery range that can also spread grass to speed up drying.

Simon Weaving says that the Combi 5 can be configured in five ways thanks to the telescopic mounting for one of the rotors and the reversible drive to the other.

It can rake conventionally into a central swath, into two swaths or into a swath to one side.

It will also spread grass – not as effectively as a tedder, Mr Weaving concedes, but usefully nonetheless – and move two swaths sideways on to fresh ground to dry damp straw, for example.

Overall working width is 5.5m and, for transport, the frame can be rotated to position the two rotors more or less in line astern with a pair of tine arms removed to bring transport width down to 2.3m. 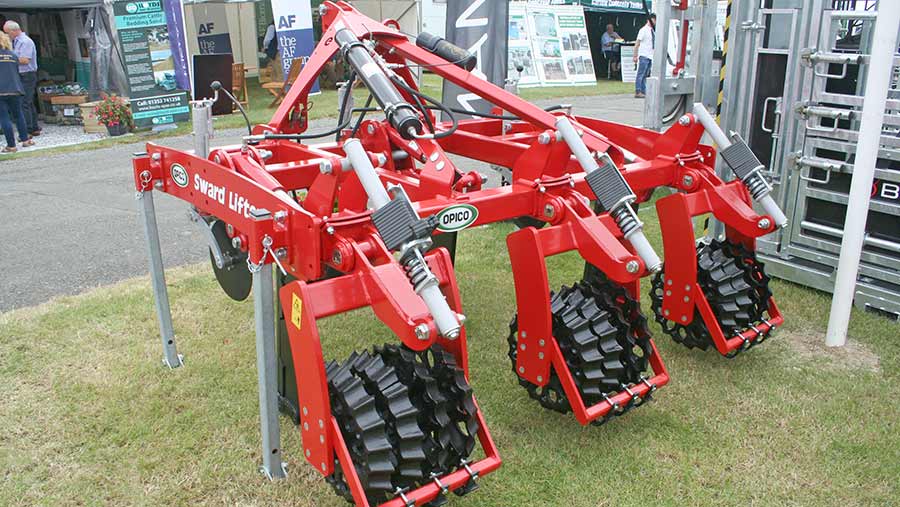 The latest version of Opico’s grassland subsoiler is reckoned to have more effective auto-reset protection and be easier to set-up.

The Sward Lifter comes in seven-leg, five-leg and three-leg sizes, with the latter being the most popular for operation behind a 120-140hp tractor.

“This implement is designed for routine removal of compaction by gently lifting and restructuring the soil profile without significant heave at the surface,” explains James Woolway of Opico.

“The leading disc is intended to work just 2in deep to cut through the root zone, but users often push it deeper, leaving little scope for the previous mounting design to deflect against stones.

This results in more pressure than necessary on the bearing.”

To overcome that, the new design has a trailing arm for the disc that pivots against a compression spring to provide better protection.

Similarly, the individual mounts for the serrated packer rings that level any heave incorporate a short compression spring to allow for an uneven surface, with depth adjustment now by swing-out slices on the adjuster rod.

Also, leg stagger has been increased for improved performance when being used at greater depths on arable land, says Mr Woolway, and a larger volume accumulator allows two legs to fully ‘trip’ when previously this would tend to ping one of the back-up shear bolts.

Prices start at £7,445 for the shear-bolt-only version and from £10,697 for hydraulic reset and shear-bolt protection. 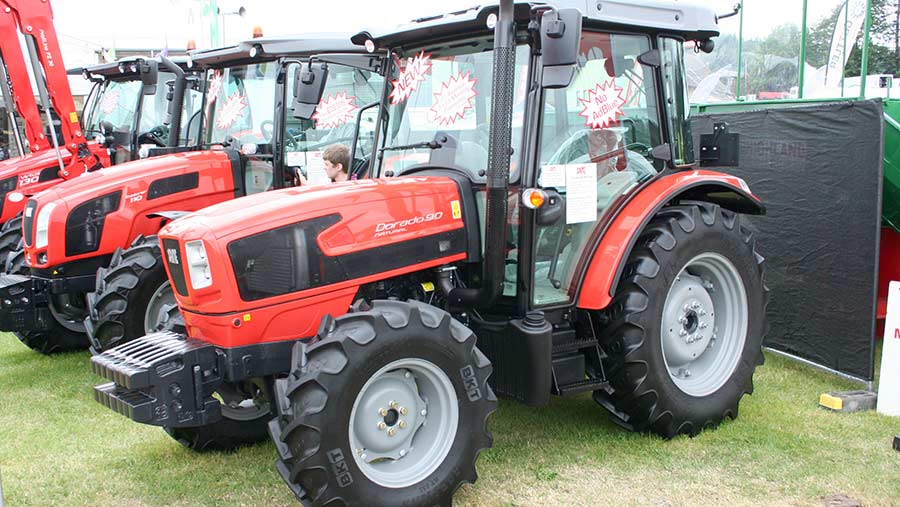 The Dorado Natural is a new ‘economy’ model for the Same tractor range that also comes in the same Deutz-Fahr green as the 5D Keyline series.

Transmissions are confined to a 15×15 or 30×15 synchro shuttle unit, with a 50-litre/min gear pump (plus 17-litre/min steering pump) providing flow to the spool valves and 2.5t or 3.5t rear three-point linkage.

In addition to the cab version, the tractors can be had with an open platform for the full fresh air farming experience.