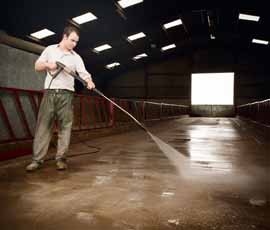 A new ultrasonic nozzle developed by a team of scientists from the University of Southampton, which massively improves the ability of water to clean, could mean that in the near future pressure washing duties on farms will use much less water.

Currently, farming uses a lot of water (and power) for cleaning everything from milking parlours to tractors. But Professor Tim Leighton and Dr Peter Birkin’s device uses less water and power than the equivalent pressure washer (about two litres a minute compared to 20 litres a minute and less than 200W compared to 2kW).

The new nozzle generates both bubbles and ultrasound. Both travel down the water stream to the dirty surface, where the bubbles act as microscopic ‘smart scrubbers’, seeking and entering crevices to remove dirt using shear force in the same way that currents in a babbling brook can strip off riverbank soil.

Licences to enable companies to bring the technology into their product lines have been negotiated with a number of companies to explore cleaning products.