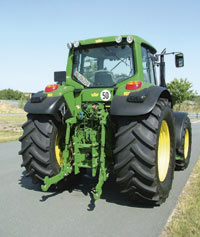 Tractor in-cab noise at high road speeds can be halved through fitting a new type of tyre to be launched this November by Continental.

The company says its new Silent Speed Tyre (SST) is the world’s first in this category, claiming that the design reduces noise level experienced by the tractor driver by at least three decibels (dB) a reduction of 50% in the decibel logarithmic scale. 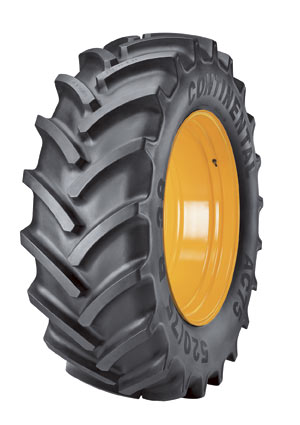 “There’s a threshold in road speeds over which the frequency of sound produced by standard tractor rear wheel tyres starts to produce a booming or droning noise that can eventually cause long-term damage to hearing when experienced regularly over periods of time,” explains Hans-Ulrich Klose, engineer with the Continental mother concern CGS Tyres. This particular noise, he adds, is generated by the rear axle tyres, the front tyres of a tractor having no effect on in-cab sound levels.

Research by Continental indicates that the problem of in-cab “drone” cropped up only five or six years ago when comparatively high-speed tractors capable of 50-60 kmh (30-37 mph) became more common on European roads. The company found that virtually all makes of tractors had the same problem of vibration impulse caused by the rear tyre lugs hitting the road. Vibrations travel through the back axle up into the cab – present cab suspension systems offer little or no resistance to this, according to Continental. The cab then acts as a resonance chamber, just like a bell. At between around 26-34 mph in-cab resonance caused by some makes of tyres can push the noise level up to around 80dB for the driver, the noise experienced when standing beside a power mower.

Fitting the new Silent Speed Tyres takes noise levels down to that experienced in a well-insulated mid-range family car at 80mph, claims Continental.

The SST tyres, approved for speeds up to 44mph, look much the same as your normal product but the carcass construction and belt design have been altered to give superior damping characteristics and more stiffness. At the same time the Prague-based company says rolling resistance has not been increased and that field attributes such as traction, load capacity and footprint size have been at least maintained. To be launched at this year’s Agritechnica event in Hanover, Germany, the tyres will first of all be available in the popular 650/65 R38 and 600/65 R38 sizes. The company is coy about naming a price but assures that the premium asked will be a comparatively small one when assessed against “greatly improved driver comfort and the chance of drivers for better long term audio health.”