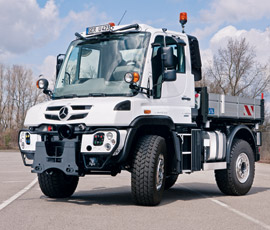 It’s been a while since Mercedes-Benz last launched a Unimog, but here’s a first look at its latest incarnation.

Under the cab there’s a new super clean and green Euro 5 engine, which can arrive in either four- or six-pot guise. It’ll churn out anything from 177hp in the smallest U400 model up to 354hp from the biggest. There’s also 1,100Nm torque on offer from the U400’s 6.3-litre engine.

Power is directed through a Mercedes synchromesh transmission with eight forward and six reverse gears. You can have an extra eight working and eight crawling gears if you’re using it for steady work. An automatic gearshift function and hydrostatic drive can be plucked from the options list, too.

Top speed is a brisk 90kph and turning circle is 11.5m. Right-hand drive can be specified and, if you’re loading plenty on the Moggy’s tail, the progressive coil springs should still soak up the bumps pretty nicely.

Towing capacity is 28t and there’s a dual-circuit hydraulic system with up to four proportional spools. Closed hydraulic circuits provide up to 125 litres/min flow rate and there are two pto speeds (540 and 1,000).