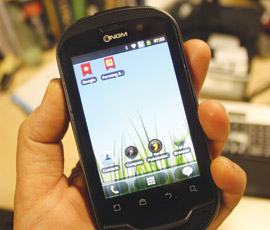 After a laggardly start, rugged smartphones are popping up like mushrooms in a dewy autumn meadow. The latest of these is the Explorer from Italian firm NGM, following swiftly on the heels of the German-made Utano Barrier T180 (also sold as the JCB Toughphone Pro-Smart).

Both models are dust-, shock- and waterproof and both use the same Android operating system, so if you already have an HTC/Motorola/Samsung/LG smartphone you won’t have to learn a new operating system.

One of the biggest differences between the two makes is in feel. The Utano is chunky in an agreeably rubbery way, while the NGM feels as if it’s made of cast iron. There’s also a thick layer of Gorilla glass on the front of the NGM that looks as if it can easily cope with a drop on to the oh-so-hard concrete of the workshop floor.

The buttons and bungs all have proper o-rings and everything is – literally – well screwed together. Rap this phone really hard with your knuckles and you just hurt your hand. Do the same thing on a standard smartphone and you’ll probably break it.

Like the Utano, the NGM Explorer can run either one or two SIM cards at the same time. That’s useful if you suffer patchy network coverage across the farm and it’s pretty simple to hop from one network to another. The downside is that keeping both SIMs running does mean standby time is greatly reduced, though you can run it with just a single SIM quite happily. In the latter case, the relatively chunky battery seemed to last pretty well.

The 5MP camera and video are decent quality and access to the internet, wi-fi and GPS functions all work as well as they do on any big-name make. Despite that thick layer of glass, the touchscreen was as quick and sensitive as on any other phone.

The NGM Explorer is sold by Daventry firm The Phone Trader. Cost is £289 + VAT and if you are already on a £25/month or more plan you may be able to get it as a free upgrade.

FW verdict: This smartphone looks like it should stand up to all but the cruellest treatment from farmers and contractors. But you’ll need well-stitched pockets to cope with the weight

Read our review of the Utano Barrier