Listen to the sceptics and they will happily inform you that shelling out a huge amount of money on a chaser bin is the sort of behaviour that should have you sectioned.

But for those running the biggest combines on the market – and having to deal with outputs of more than 100t/hour – they don’t seem such a silly idea.

Will Goff farms more than 2,000ha near Dereham, Norfolk, and after operating a fleet of tractors and trailers on corn-carting duties for years, he realised something had to change. 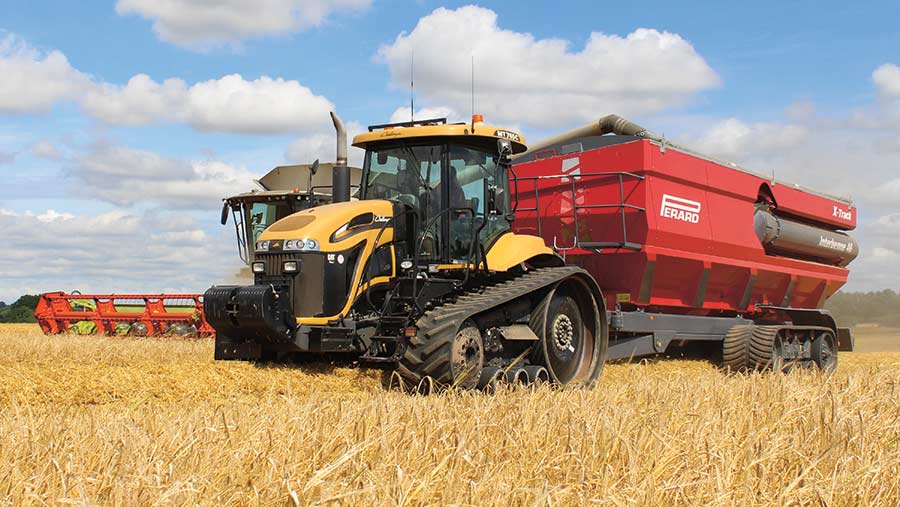 Not only was he tying up several tractors and drivers, but he was getting increasingly concerned about the amount of compaction being caused by these vehicles running all over the field.

As part of a bigger farm project, he was beginning to implement a 10m controlled traffic farming (CTF) system and a chaser bin seemed to be the most sensible way to go.

“Chaser bins are a bit of a Marmite subject as they cost so much and do only one job,” says Mr Goff.

“So rather than go straight out and buy one, we decided to hire one for a couple of years to see if it was a luxury or a necessity.”

In the meantime he had a surprise inspection from the Driver and Vehicle Standards Agency (DVSA) at the farm, which dramatically changed the way he viewed tractors and trailers on the road.

“The inspectors knew we were running a haulage  business alongside the farm and that some of the lorry drivers helped out with tractor driving through harvest, so they picked through everyone’s working hours, health and safety procedures and vehicle maintenance schedules with a fine-toothed comb,” says Mr Goff.

Luckily they didn’t find anything amiss, but the inspection was enough to make him reassess his harvest logistics.

Rather than running his fleet of tractors and trailers on the road – some vehicles were nearing the legal speed and weight limits – he decided to switch to running an artic bulker instead.

This would have to be fuelled with white diesel and the driver would be limited in his working hours, but the payoff would be squeaky-clean paperwork and fewer machines on the road.

With this decision made, it was the final push he needed to invest in a chaser bin.

However, finding one big enough to fill the bulker in one hit and empty its contents fast enough wasn’t that easy.

The 20t Richard Western machine he had been hiring turned out to be too small to make the job efficient enough.

And, because it was a few years old, it had a sluggish unloading speed that meant it couldn’t keep up with the combines.

“It took about 5min to unload 20t, which meant the chaser driver was always on the back foot and the combines would sometimes have to wait for him to catch up.”

Unloading speed isn’t a problem on most newer chasers, but finding one that could hold enough crop was a bit more of a challenge, he says.

“We looked at everything out there, but in the end the Pérard Interbenne was the only one that had everything we wanted.” 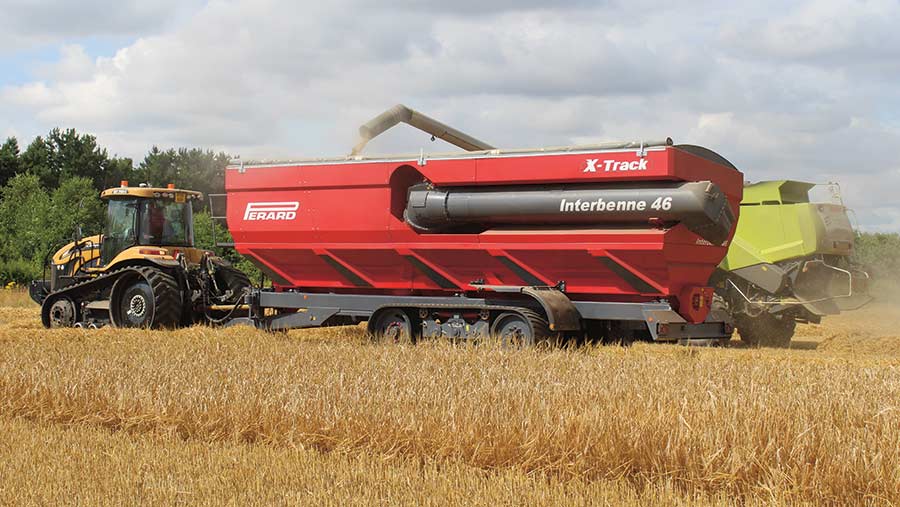 It was also relatively simple, which was an important consideration as the significant outlay meant it would have to give at least 10 years of service without incurring too many expensive repairs.

At a whopping 46cu m, the Interbenne was one of the biggest machines available at the time, with a hopper size similar to that of the farm’s artic bulkers.

That meant it could get as near as possible to the lorry’s maximum weight limit in one fill, minimising the number of trips across the field.

“We’ve got some pretty light DAF tractor units coupled to Fruehauf trailers, which means we can easily get 30t on and still be within the 44t weight limit,” says Mr Goff.

“So to make the most of that, we need to get a full load on every time.”

The Interbenne Mr Goff purchased was an ex-demonstrator that had spent the past couple of years traipsing around the major European shows and being tested out by potential customers.

It was also fitted with Sly Agri’s sophisticated contour-following and suspended track units, which would help spread its 40t-plus bulk when loaded. 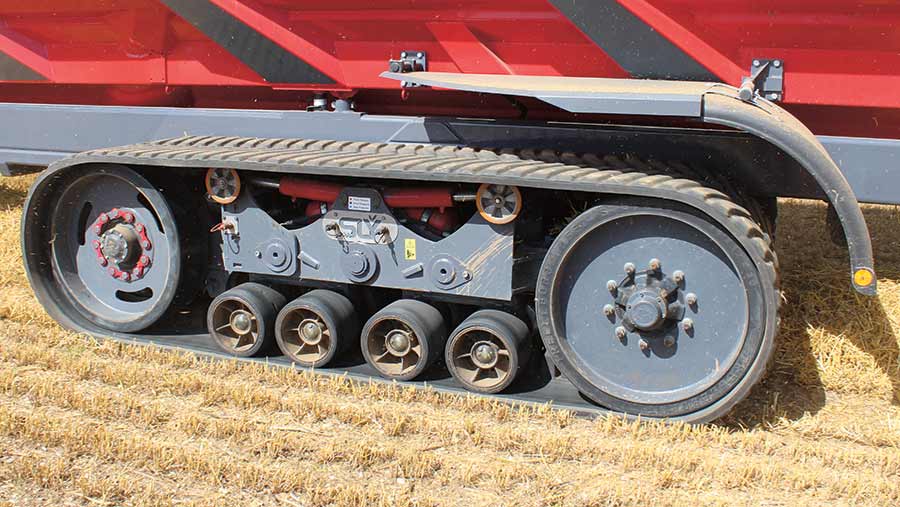 “The bin has got more stamps in its passport than most of us on the farm put together, but it’s in amazingly good condition and there’s no way we could ever have afforded a new one,” he says.

After a bit of negotiation, Mr Goff purchased the demonstrator chaser and track units for a similar price to a new tri-axle equivalent.

It arrived on the farm for the start of the 2016 harvest season and was hooked straight on to the farm’s Challenger 765C.

Considering it’s such a massive and complicated-looking machine, it was actually pretty simple to set up and run, says Mr Goff.

Power to drive the bottom auger and unloading spout comes straight off the tractor’s pto and there are just three spools required – one for swinging the spout out, one for opening the spout trap door and one for pressurising the hydraulic drawbar suspension system.

To fit in with the farm’s 10m CTF system, Mr Goff is running the outfit in the same wheelings as the combine.

Luckily, the harvester’s spout is just long enough to reach without having to add an extension.

However, it does make it hard to completely and evenly fill the bin with lighter crops.

In wheat, the Lexion’s tank will comfortably hold 10t, meaning the chaser has to do three unloads before it has enough on board to fill the artic bulker.

To make sure the driver loads the correct amount on to the lorry without having any left over, it has also been fitted with a Digi-Star weighing system. This has a filling alarm that is pre-programmed to go off at different times, depending on which lorry is being loaded.

“We have a couple of lorries that will hold only 28t, so it minimises the risk of overfilling,” says Mr Goff.

It will also unload enough crop through its massive 700mm unloading auger to fill the bulker in a minute. That gives the driver plenty of time to travel, unload and get back to the combine before it needs emptying again.

Added to that, the spout is long enough to reach over a hedge, meaning they can often keep the lorry off the headland and avoid unnecessary compaction.

So far the chaser has given few problems, but they have had to have a couple of attempts at calibrating the weigher so that it tallies with the HGVs’ units.

“It might seem like a ridiculous machine to a lot of people, but following our DVSA inspection we have no choice but to run one with our HGV fleet,” says Mr Goff.

“It is also the only way to keep two high-capacity combines operating at their maximum all harvest.”

While Mr Goff was weighing up his options for getting tractors off the road, he also looked at the viability of running Unimogs and trailers.

These can be classified as an HGV, are light – so they can carry a high payload – and have decent enough off-road capabilities to run alongside the combine.

“There’s a lot of mileage in the Unimog concept and the fact that the 430 model kicks out about 300hp and weighs only 7.5t (unladen) means you can carry a much bigger trailer than an equivalent tractor.”

However, he was already running a fleet of lorries and had a Challenger free to pull the chaser, so the figures didn’t quite stack up in its favour.