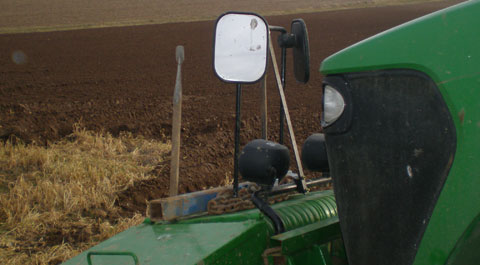 A simple home-made mirror system mounted on the front tractor weights is helping a Norfolk farmer pull out safely on to public roads.

Kelvin Middleton came up with the innovative idea after having a near miss when pulling on to a road with high banks and hedges either side.

He was inching out so that traffic could see the front weights and waited until he thought the road was clear. But the front weights were almost touching the opposite bank before he had a clear view from the cab. 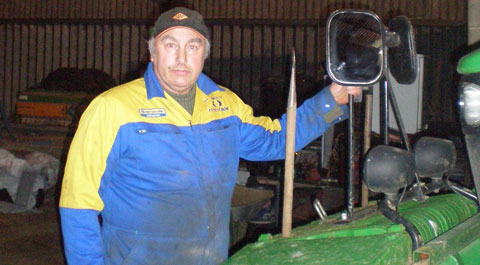 Mr Middleton was about to drive on to the road when a motorbike whizzed through the ever-diminishing, gap narrowly avoiding a fatal accident.

Concerned about what might have happened to the rider Mr Middleton made a bracket to fit on to the front weights and attached two angled mirrors on long stalks.

The height and angle of the mirrors mean they can be seen easily from the tractor seat and give a clear view of the traffic in both directions.

Mr Middleton’s is the second system of this type we have some across. Last year Farmers Weekly reported on a similar cable-operated system designed by a livestock farmer near Galway, Ireland. 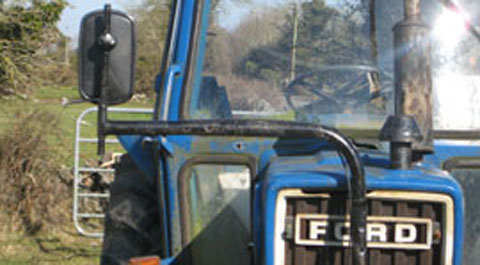 Micheal Furey’s system uses a redundant tractor wing mirror on a moveable pole in front of the radiator grille.

A cable operated from the dashboard allows the driver to swing the whole unit to its straight-ahead working position or pull it back flat against the side of the bonnet when not needed.

A second cable allows the mirror itself to be swivelled from side to side so that the driver gets a good view of traffic coming from either side.